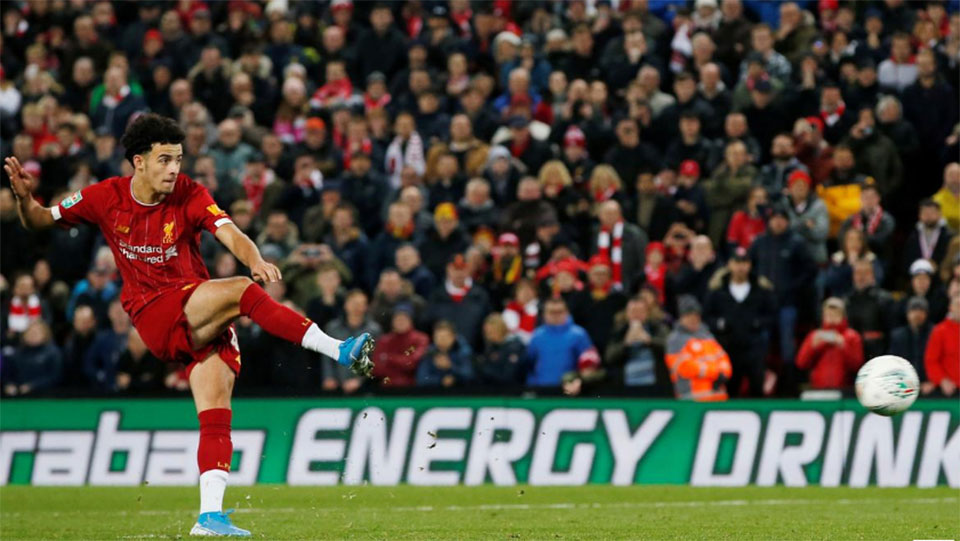 The 18-year-old substitute kept his cool in front of the Kop to send Liverpool through after the hosts had trailed 3-1, 4-2 and 5-4 before a stoppage-time equaliser by Divock Origi.

On a crazy evening it looked as though Joe Willock’s screamer had earned Arsenal a memorable victory, but Liverpool proved irrepressible as their barnstorming season continued.

Liverpool scored all five of their penalties while fledgling keeper Caoimhin Kelleher, 20, saved from Dani Ceballos.

It was only the second time Liverpool had conceded five at home in the last 66 years. The other occasion was a 6-3 League Cup loss to Arsenal in 2007.

“We can talk about tactics but who cares on a night like this?” Klopp, whose side have dropped only two points in their opening 10 Premier League games, said.

“I hoped for the boys they would have a game to remember. What they did tonight, I lost it really.

“If you don’t win nobody remembers it in three years, if it works out the boys will remember it forever.”

Defeat was a bitter one for Arsenal manager Unai Emery whose decision to give Mesut Ozil only his third start of the season paid off with the German playmaker in dazzling form.

Willock’s long-range effort appeared to have sealed a morale-boosting win for Arsenal after a difficult few days since squandering a two-goal lead to draw 2-2 with Crystal Palace.

‘CRAZY MATCH’
“A crazy match. I am very proud of their work, we had a high rhythm in the first 45 minutes,” Emery said.

“At the end we were winning until the last action. Penalties are 50/50 and we lost. We are sad but our work, we deserve to have more. There are lots of positives to take.”

Liverpool took the lead in the sixth minute as Arsenal’s Shkodran Mustafi scored a comical own goal, his attempted clearance from Alex Oxlade-Chamberlain’s low cross going into the net off his knee.

Arsenal levelled after 19 minutes when Mesut Ozil picked out Bukayo Saka in space and after his shot was saved and Liverpool could not clear, an offside-looking Lucas Torreira tapped home.

Brazilian teenager Gabriel Martinelli scored his first goal of the night seven minutes later to put Arsenal ahead, scooping in from close range after a save by Kelleher.

Liverpool self-destructed as Elliott’s poor pass went to Ozil who played in Saka to square for Martinelli to score his seventh of the season and make it 3-1, but in the 43rd minute Elliott tumbled in the box at the other end and James Milner tucked away a penalty.

Liverpool equalised in the 62nd minute when Jones played in Origi who turned superbly before unleashing a shot too powerful for Arsenal keeper Emiliano Martinez.

Willock’s goal arguably topped the lot though as he advanced forward before launching an unstoppable right-foot shot into the top corner from 30 metres.

But Liverpool have forgotten how to lose and Origi’s shot on the turn, after a cross from 18-year-old Neco Williams, redeemed them at the death.

Chelsea moved another step towards regaining the Premier League title with a 3-1 drubbing of Arsenal in the table-topping London... Read More...

69 including 15 lawmakers of federal parliament test positive for COVID-19, one succumbs to the virus
15 hours ago

Medical supplies including oxygen cylinders and ventilators ready to be delivered to Nepal: China
10 hours ago

Congress formally decides to vote against PM Oli
7 hours ago

No COVID-19 infection on Everest Base Camp: Tourism ministry
10 hours ago