Liverpool canter to 2-0 victory at Southampton 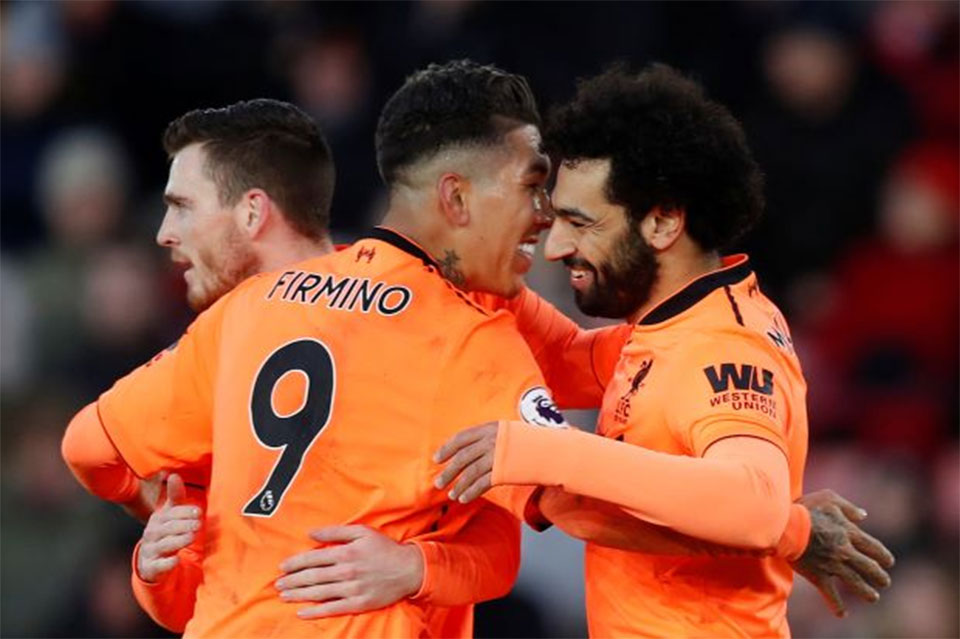 Feb 12: After the agonies of last week, Liverpool closed to within two points of second-placed Manchester United with a comfortable 2-0 victory at relegation-haunted Southampton on Sunday.

Held 2-2 by top-four rivals Tottenham Hotspur last Sunday in a turbulent game that had manager Juergen Klopp apparently in danger of self combustion, Liverpool barely broke sweat at St Mary’s Stadium as Roberto Firmino and Mohamed Salah ran the show.

Firmino fired Liverpool ahead after seven minutes when Southampton messed up in defence and Salah picked out his fellow forward to stroke home.

The roles were reversed shortly before halftime when Liverpool counter-attacked and Firmino played in Salah for his 22nd goal of the season with an audacious back heel.

Salah is one behind the league’s top scorer Harry Kane.

“It was mature today,” Klopp said. “The rhythm was not too good today but we scored wonderful goals and should have scored more. I think we deserved the three points, clean sheet, nearly perfect today. We could have closed it earlier.”

Liverpool, who featured three former Southampton players in their starting lineup and also brought on former Saints Adam Lallana and Dejan Lovren late on, should have added more in the second half as the hosts offered precious little.

Liverpool have 54 points to United’s 56 with Tottenham Hotspur on 52 and champions Chelsea, who play bottom club West Bromwich Albion on Monday, on 50 as the battle for Champions League spots hots up.

Southampton are third from bottom, a point behind 17th-placed Huddersfield Town who won earlier on Sunday.

Their former defender Virgil van Dijk, who joined Liverpool in the recent transfer window after an often acrimonious transfer saga, was booed by the home faithful who had little else to get excited about.

“I think it is a bit unfair because no-one really knows what happened over the summer and the last few months but I just kept my head down and enjoyed it,” the Dutchman said.

“I have a lot of good friends (at Southampton), I care for the club. It is difficult to get out of the relegation zone but they have quality players.”

LONDON, Aug 15: Liverpool roared back from a goal down to beat Arsenal 4-3 on Sunday in a thrilling finish to... Read More...

Electoral alliance a must to safeguard democratic values: Minister Shrestha
54 minutes ago