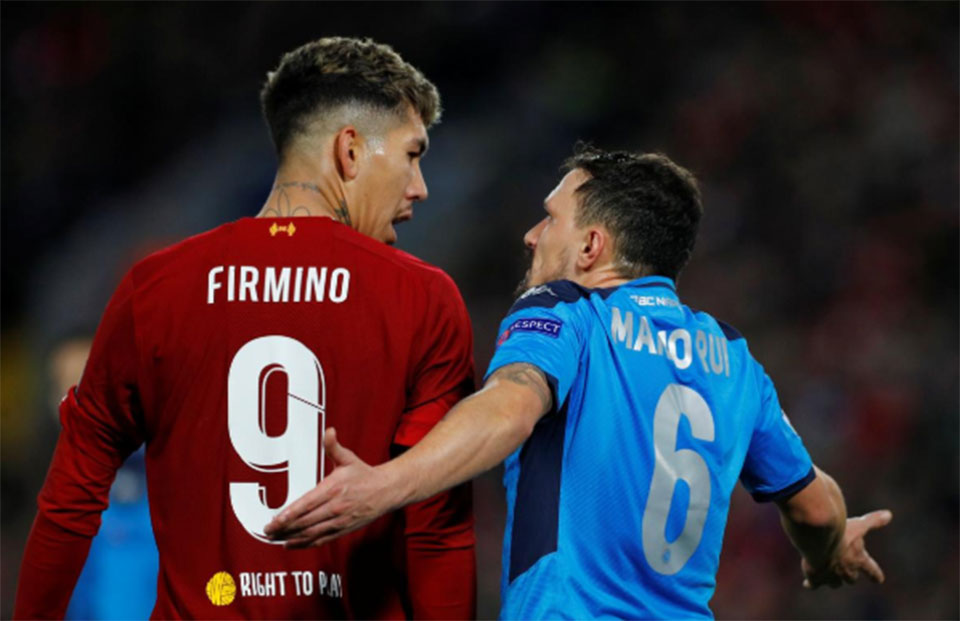 LIVERPOOL, England, Nov 28: Liverpool and Napoli drew 1-1 in a cagey encounter at Anfield on Wednesday, leaving both sides with work to do to reach the last 16 in their final Champions League group matches.

A Dejan Lovren header in the 65th minute cancelled out Dries Mertens’ first-half opener for Napoli, who will head home the happier after another disciplined performance in which they defended deep but posed questions on the counter-attack.

European champions Liverpool lead Group E on 10 points with Napoli a point behind and Salzburg on seven. Juergen Klopp’s side are away to Salzburg in their final game while Napoli host bottom club Genk.

Carlo Ancelotti’s Napoli will now expect to secure their place in the knockout stage with a win over a Genk side with a solitary point who were beaten 4-1 at home by Salzburg on Wednesday.

Liverpool though will need at least a point in Austria on Dec. 10 to avoid elimination and given their fixture congestion next month — in which they will feature in the Club World Cup in Qatar — this was a frustrating result.

“In [the Napoli] dressing room they feel like they are already through and maybe they are,” said Klopp.

The Premier League leaders, who could have wrapped up top spot with a game to spare, had to come from behind to get their point and never truly settled into the kind of rhythm for which they have become known.

The night began badly with Liverpool’s Brazilian holding midfielder Fabinho limping off in the 19th minute with what appeared to be an ankle injury.

“It’s early and we all hope it’s not too serious but it’s pretty painful and in an area you don’t want to have pain, around the ankle,” said Klopp.

Matters got worse for Klopp when Belgian Mertens put Napoli ahead in the 21st minute with a sweet strike from a tight angle after running on to a through-ball from Giovanni Di Lorenzo.

Liverpool’s defence was opened up too easily down their left and the Anfield crowd’s agitation increased as two separate VAR reviews were needed before the goal was confirmed.

Klopp was certainly losing his cool and, on the stroke of halftime, he was booked for protesting, shortly after Liverpool had appealed in vain for a penalty after Sadio Mane went down in the box.

The nearest Liverpool came to a breakthrough in the opening 45 minutes was in the final moments of the half when James Milner jinked into the box and blasted at the near post but Napoli keeper Alex Meret did well to parry.

There was more intensity about Liverpool after the break and they went close to levelling when Roberto Firmino hooked the ball goalwards but Napoli defender Kalidou Koulibaly did well to clear off the line.

The equaliser finally came when Lovren headed home from a James Milner corner in the 65th minute and while there was plenty of pressure from the home side in the latter stages they were frustrated by Ancelotti’s well-marshalled defence.

Napoli looked much better than their seventh place in Serie A suggests and showed no sign of the internal problems that have beset them in recent weeks.

“I saw a lot of commitment and personality,” said Ancelotti.

“I was sure we would play well against a fantastic team. Of course, I knew we would suffer at times but I also knew we could cause them problems too with the way we play.

“Maybe it was not such an aesthetically pleasing match but we put in a strong performance.”