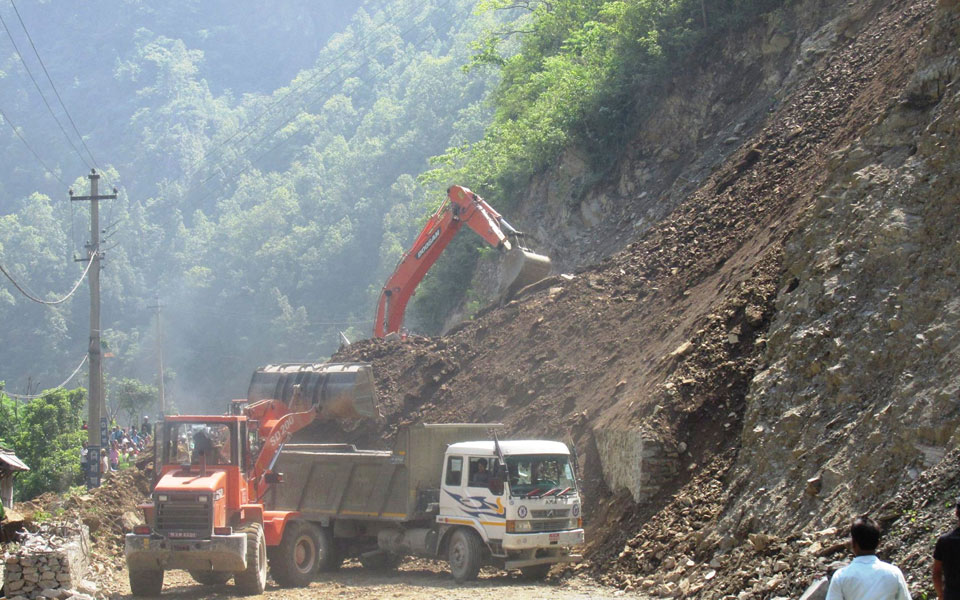 KATHMANDU, June 23: Two police personnel were killed and two are still missing when the van they were travelling in was buried by a landslide along the Narayanghat-Mugling road on Thursday night. A truck was also hit by the landslide leaving the driver and help injured.

According to Deepak Shrestha, a Deputy Superintendent of Police at the Chitwan Police Office, rescuers have recovered the bodies of assistant sub-inspector Nischal Tamang and policeman Deepak Kumar Maskey from the landslide debris at Kalikhola.

Rescuers have not been able to trace the two missing police personnel -- Sandip Karki and Lil Bahadur Chepang.

The landslide had hit the vehicles at 1 am. There were four police personnel in the van under the command of ASI Tamang. The van belonged to the Mugling police station. Likewise, the injured truck driver Ram Kumar Lama and help Sonu Blon are out of danger, according to police.

The landslide debris has reached all the way down to the bank of the Trishuli River. "Since the missing police personnel and the van might have been buried in the debris that stretches from the road to the river bank, it is necessary to dig up the debris. A larger portion of the debris has yet to be removed," said Shiva Khanal, engineer and information officer of Narayanghat-Mugling Road Project.

Landslides are chronic along the Narayanghat-Mugling road section during the monsoon season. The ongoing work to expand the road section to two lanes has been blamed for the frequent landslides. As many as 50 landslides were recorded during the last monsoon.

The road expansion work which began in April 2015, was supposed to be completed by now as per an agreement. However, only 41% of the work has been completed so far.

CHITWAN, June 23: A van with four police personnel and a truck have gone missing as landslide swept away road... Read More...

DOLAKHA, Sept 1: Two persons died and five others have gone missing in a landslide triggered by heavy rainfall at Chyotchyot,... Read More...

Availability of animal carcasses attracting vultures to Tanahun
50 minutes ago