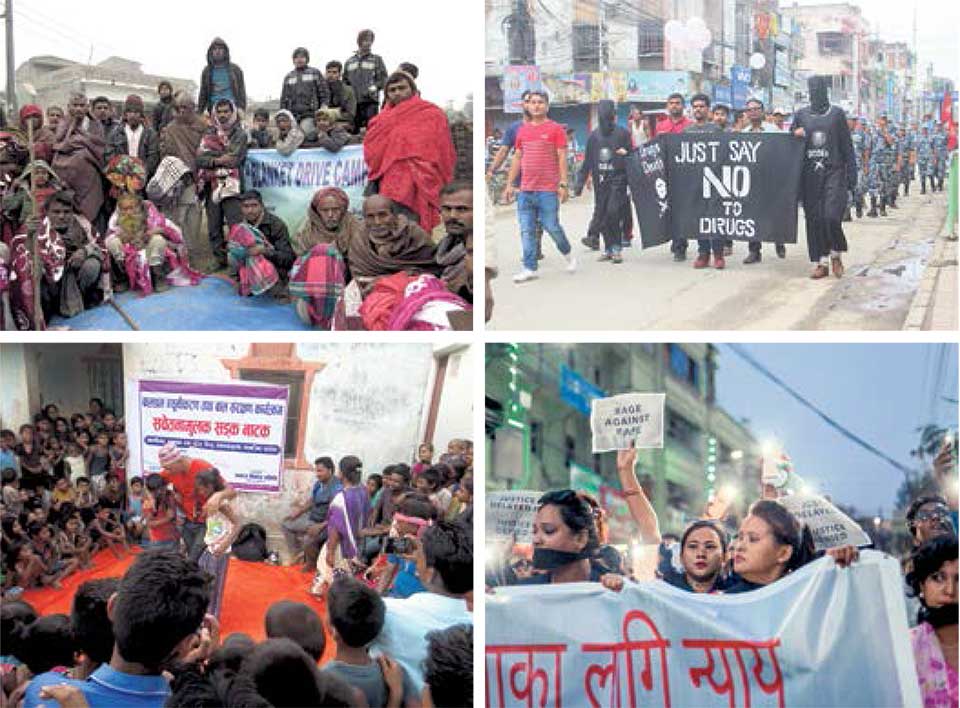 For a very long time Nepal has been a breeding ground for transgressions of various forms. This has caused distress among the Nepali mass for quite some time now. Cases of drug abuse, human trafficking, child prostitution and more heinous offenses aren’t unfamiliar stories. Over the years, various groups of individuals and agencies have advocated and worked for the rehabilitation of the victims and ardently endeavored to prevent further wrongdoings. Sano Paila is one among many.

The NGO came into being in response to this very pandemic. And it stands today as an agent of righting all that is wrong with its efforts in child support, rescue integration, addiction rehabilitation and providing sustainable care to the victims of human trafficking and bodily disabilities.

Kanchan Jha, who serves as the Chief Executive Officer for the NGO, felt that as a citizen of a country in dire need of help efforts had to be initiated. He wasn’t deluded into thinking that his efforts would bring revolutionary reforms but felt that he had to make a contribution somehow. With a band of friends, Jha began by joining hands with the local police in the Tarai region where issues with ganja (Cannabis) was a major cause for worry. The plots for the crops were identified and a clean sweep of the plantations followed.
Motivated by the results this same group branched out to addressing other issues. But first they established themselves under a name, Sano Paila (Little Steps). Sano Paila registered in the year 2006 and is in its 13th year of operations. Since its establishment, Sano Paila has launched a string of projects, all with the intention of making victims of various atrocious crimes self sustained individuals in the society so that they need not depend on anyone to make their livelihood.

Kaasya Nepal is one of such projects. It is a division in the organization where a group of individuals handcraft brass ornaments. They are responsible for the designing and crafting of the ornaments and they are fashioned with immeasurable skills. What is singular about the group though is that they comprise of individuals who were once victims of human trafficking and disabilities.

Nepal has always been listed as one of the most human traffic-prone countries in the world. But since the earthquakes of 2015, the number of registered cases of human trafficking has apparently increased three folds. In such a scenario, authorities in the Indian borders called for attention in rescuing and Sano Paila was one of the first organizations to react. Many of the rescued have been reintegrated to the places of their origin (namely Humla and Kalikot) and some were trained in the basics of skills through which they could earn their living.

“Our mission has really always been to provide victims a chance. Everyone deserves an opportunity to live their lives of their own accord, be it a drug addict or a trafficked victim,” explains Sandip Sada, regional manager of Sano Paila. He adds that Kaasya is, in a way, an experimental project. The organization has made efforts to make the unit a self-sustained entity that need not rely on its mother organization for its miscellaneous needs. The workers are trained by foreign volunteers and provided with workspace and the necessary materials as well. The responsibility of the distribution of the task, assembling and managing productions all fall on the group. The idea behind this is that by giving them autonomy in their work perhaps the victims will regain the confidence to take charge of their lives.

Sano Paila has also launched projects for child rescue and reintegration. They currently have house facilities in Janakpur and Birgunj whereby trafficked children who are what is termed “paper orphans” are raised and educated. Paper orphans are essentially children who are deemed orphans on legal documents when the truth is that their guardians are well and living. “38 of these children have been reintegrated and the work is still in progress,” Sada informs The Week.

At present, they are also in search of parents of five children who hail all the way from Bajura. The children had been lured to the capital with promises of education and a life of comfort but soon found themselves working under the tutelages of shrewd employers. They had been promptly rescued and currently live in Sano Paila’s house facility in Janakpur.

Sano Paila might have started out small but it has made leaps of progress in guaranteeing better lives for those who once thought their lives as they knew it was over. At its core, Sano Pailo is an attempt to bring peace in a nation inundated with crimes of all sorts. It has done quite a lot but the founders claim that much more is yet to be achieved.