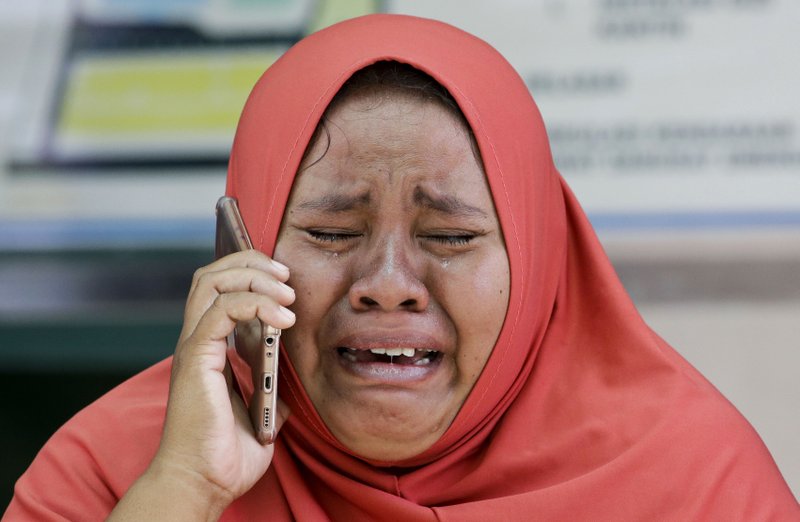 A woman cries as she uses the recovered mobile phone of her daughter who was killed in the massive earthquake at Palu, Central Sulawesi, Indonesia Thursday, Oct. 4, 2018. The mother did not get the chance to see the body of her daughter after she was buried earlier in a mass grave. Life is on hold for thousands living in tents and shelters in the Indonesian city hit by a powerful earthquake and tsunami, unsure when they’ll be able to rebuild and spending hours each day often futilely trying to secure necessities such as fuel for generators. (AP Photo/Aaron Favila)

PALU, Oct 4: Life is on hold for thousands living in tents and shelters in the Indonesian city hit by a powerful earthquake and tsunami, unsure when they’ll be able to rebuild and spending hours each day often futilely trying to secure necessities such as fuel for generators.

Residents whose homes had been destroyed had little but uncertainty Thursday on the seventh day since the disasters. But they also had hope more aid would pour into the city of Palu and the surrounding Donggala district on the island of Sulawesi.

Some residents have taken to digging through reeking piles of sodden food and debris, searching a warehouse wrecked in the tsunami for anything they could salvage: cans of condensed milk, soft drinks, rice, candy and painkillers. Others carted away corrugated metal, wood, piping and other items to build temporary shelters or sell.

Andi Rusding, huddled with numerous family members under a tarpaulin, said they’d gotten some aid but its distribution was uneven and they felt shortchanged.

“Please tell the government and the NGOs if they’re really willing to help us with some foods please do not give it away through the command posts,” he said. “It is better to go directly to each and every tent. Because sometime (the relief goods) didn’t distribute evenly.”

In the same camp, Masrita Arifin said that more than anything she was afraid, because of rumors there’d be another big quake.

Hoax warnings have proliferated since the magnitude 7.5 quake and tsunami Friday, and the national disaster agency has asked people to only rely on credible sources of information.

“I cannot describe it,” she said of their living conditions in the camp just a few hundred meters from her family’s heavily damaged home. “It’s really difficult to find water and we don’t have a place to shower, but thank God we got some aid from the government, including a medical checkup.”

The official toll has surpassed 1,400 deaths with thousands more injured and more than 70,000 residents displaced from their homes. National disaster agency spokesman Sutopo Purwo Nugroho said the number of dead would increase, but that rescue crews had reached all affected areas, after being slowed initially by broken, impassable roads and other damage.

The agency said a South Korean tourist remained missing but 119 other foreigners were safe and some evacuated. It said the health ministry has identified air transportation, water treatment, generators and shelter or tents as key priorities.

The U.N. estimated that some 200,000 people need assistance, announcing a $15 million allocation to bolster relief efforts. It said the Indonesian Ministry of Social Affairs has asked UNICEF to send social workers to support vulnerable children who are alone or became separated from their families

Zulfikri, one of hundreds queuing Wednesday night at a Palu gas station with numerous paramilitary police on guard, said he joins the queue at 8 a.m. every morning and waits hours, hoping fresh supplies of gasoline will arrive.

“It is really annoying because it’s a long time. But like it or not we just have to wait for it because we need the gasoline for our motorcycle and also for the generator. We need electricity” said Zulfikri, who uses one name.

The Sulawesi coastline spreading out from Palu is a surreal landscape of debris, beached boats, overturned cars and the foundations of obliterated houses. Wrecked homes still standing were spray painted with appeals for aid. The wall of one dwelling was scrawled with the message: “Help us Mr. President.”

More than half a dozen green, red and yellow trucks, their cabins crumpled, rested together on a debris-littered shore in West Palu. In places, boats were deposited in the yards of wrecked houses a hundred meters (yards) from the shoreline. Brightly colored cargo containers sat in the water near shore.

In some areas, rescuers use sniffer dogs to detect victims buried under tons of mud and debris.

Outside one village, a man had propped a plank against a damaged green cargo container resting in shallow water. Balancing on it, he pulled out bags of foodstuffs, making a small mountain of them on the beach.

The national disaster agency has called for improvements to cope with future incidents. With Indonesia sitting on the seismically active Pacific “Ring of Fire”, it said 176 tsunamis have been recorded since 1629.

Officials estimated some 148.4 million Indonesians are at risk in earthquake-prone areas while 3.8 million people could be in danger due to tsunamis, it said, adding that there is only a 30-40 minute window to warn villagers to flee a tsunami.

The horror was still fresh in the minds of those like furniture maker Khairul Hassan, who was working at a shop near the beach in front of a row of warehouses when the ground shook violently.

He ran to a hill and watched as the ocean heaved and hurled forward.

“I saw the waves come and sweep out everything — buildings, factories, warehouses and some people who were lost, racing from the waves, some of them women and children,” he said. “Also, warehouse workers who were trapped under goods, all swept by the sea. It’s so tragic. It’s so scary to remember.”

Nepse inches up 3.33 points after falling continuously for four days
35 minutes ago