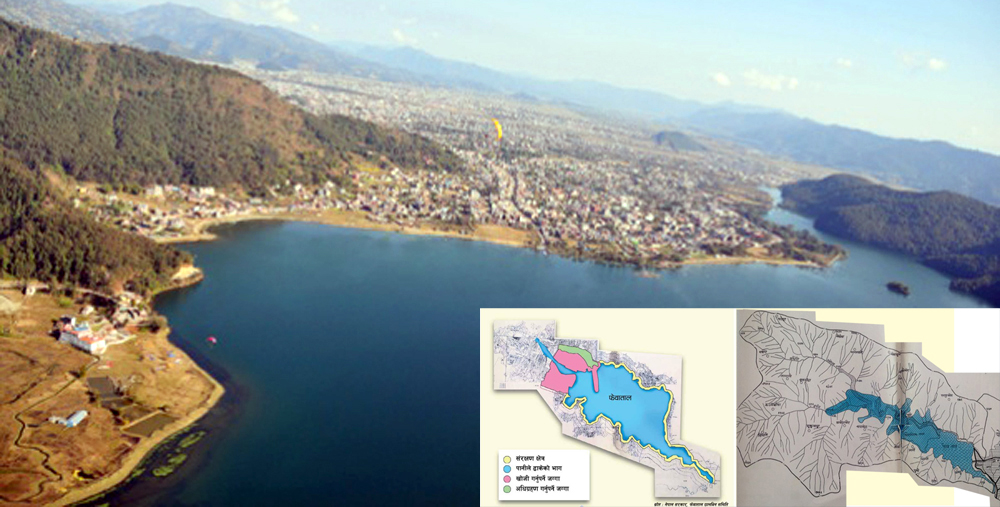 KATHMANDU, May 1: As many as 1, 692 ropanis of land of the Fewa Lake have been registered in the names of various individuals. Supreme Court on Sunday issued an interim order in the name of government to demolish illegal infrastructures built on the banks of the Fewa Lake, paving the way for the conservation of the lake.

In 2069 BS, a probe panel led by Bishwa Prakash Lamimichhane had prepared a list of those involved in the Fawa Lake encroachment.

However, the government has not yet take action against the wrongdoers.

Republica English daily, that has been publishing reports on the Fewa Lake encroachment, has received the list of those who have registered the land in their names.

The panel had recommended scrapping the land ownership certificates owned by 950 individuals.

Out of 950, 700 individuals' land falls within the conservation area.

Listed in the wetland region, people had registered this contentious land plots stretching in the area from 1 to 2 kilometers during the survery period held in 2033/34 BS.

The plots which are demarcated in straight lines look unnatural, according to experts.

The Fewa Lake which had spread in the area of 10 km has shrunk to 4.20 km according to the survery report of 2064 BS.

The encroachment had started after the lake suddenly brust in 2031 BS and 50 percent of water gushed out of the lake. The existing law bans any kinds of infrastructures around the pephery of 65 km. However, it has not been implemented.

Situated at Sedidanda, his two-story hotle is in the list.

Similarly, Fishtail Resort being run in a two-story building owned by Jagadish Lal Baidhya has also been listed.

POKHARA, August 3: It may surprise many  that land at famous Fewa Lake in Pokhara has been registered for years... Read More...

Some land plots used by Shakya’s resort belong to govt