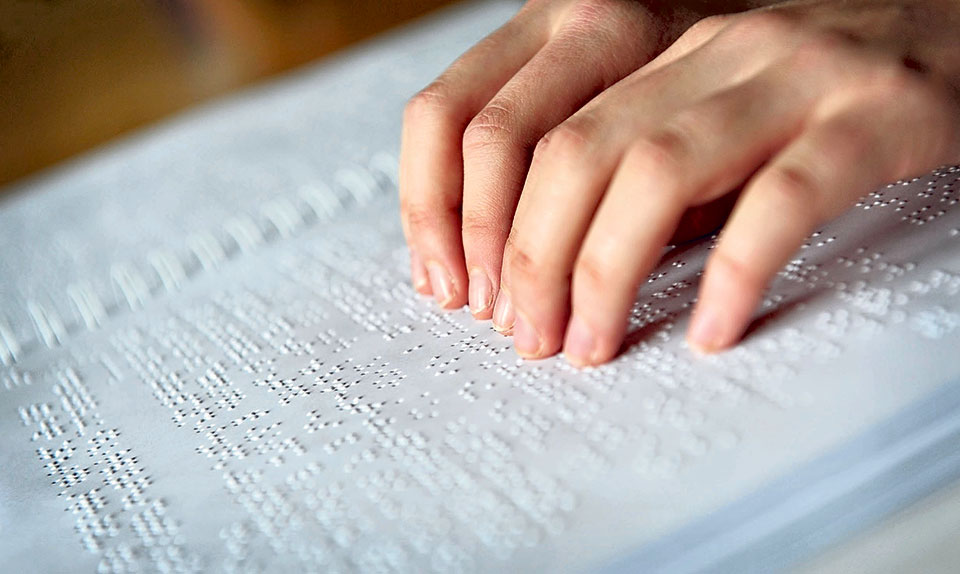 Sitting for an examination can be nerve wrecking but for visually impaired Pramod Gyawali, who is currently pursing Bachelors in Education, it’s not only about butterflies in the tummy. He has to dictate the answers to a junior student who will be writing his exams for him. This, he says, is complicated for multiple reasons as well as a perfect example of a flawed education system for visually impaired people.

Gyawali shares a story of one of his friends who is also blind. Apparently, his friend was a very dedicated student who always worked hard to secure good grades. At the end of the year, he was done with multiple revision sessions and was all ready for the finals. But, unfortunately, things didn’t go as planned. On the main day of the examination, the person who was supposed to help him write his exams refused to come.

“It was a rainy day and we were about to leave for the center when my friend received a call from his writer saying that he could not make it to the venue. My friend kept requesting and almost begged him to reconsider but, in the end, he could not appear in the exams. And just like that, his entire year was wasted,” says Gyawali. After the incident, his friend dropped out of college. “The thought of having to depend on others hit him really hard and he just couldn’t cope,” adds Gyawali.

According to him, there are many blind students who have had to face similar situations. Since there are no provisions of writing in Braille or typing out the answers in a computer for visually impaired students during board exams in Nepal, many face the uncertainty of having to depend on someone else to write for them. The responsibility of finding someone to write their exams for them and getting them to the examination hall lies on the student and when someone opts out at the last possible minute there is often nothing that can be done.

Shiva Agarwal, a visually impaired student of Bachelors in Social Work at National Mega College, says he wishes he could write his papers on his own because of this particular reason. Having to depend on a stranger isn’t a comfortable place to be in. “I’m confident about my computer skills and have enough experience during internal exams. But for the final exams, I have to depend on someone else,” he laments.

A writer’s job is to read out the questions to the examinee and write what is dictated. Each individual examinee needs to have a different writer, and the writer must be junior to them. After finding a suitable candidate, they need to apply for a permission letter for the writer that will be issued by their university. The letter states that the particular person is allowed to write the examination of the applicant. It’s mandatory to present the letter to the invigilators at the center at exam time.

Visually impaired students are kept separately in a different classroom during the examination. They are also given an hour’s worth of extra time than other students. But, Roshani Adhikari, a law student who is visually impaired, is of the mindset that allowing an extra hour during exams cannot compensate for the problems most blind students have had to face since the beginning of their student lives.

“Even though we are blind, we try to be as strong and independent as we can but our education system fails us,” says Adhikari adding that instead of studying for the exams, blind students often spend a lot of time searching for and finalizing a writer whom they can fully trust.

She further adds that the education system in Nepal also lacks innovative teaching methods thus narrowing subject options for blinds students after basic schooling. Though many visually impaired students have taken up courses on literature, language, social issues, and other similar subjects, not many take up technical subjects like science or management.

Adhikari says they might not be able to conduct lab experiments but if the teachers were to use appropriate methods then they can easily understand the logic behind mathematical problems or the labeled diagrams. For instance, instead of using ‘this’ or ‘that’ to point things out in a diagram, if they were to use the exact terms and let visually impaired student feel the models then they could easily grasp the concept.

However, our education system doesn’t only pose a challenge for blind students because of ineffective teaching methods, lack of essential learning materials like books and guides in formats that these students can easily use also creates problems. Students say that books in Braille are rarely available because of which many students have to depend on notes they made themselves during class or audio recordings of lectures.

The National Human Rights Protection Forum for Disable Nepal has been distributing the audiobooks to visually impaired students in Nepal since 2008. It offers audiobooks for students from grade one to the Ph.D. level. They use Digital Accessible Information System (DAISY) technology while making the audiobooks. This technology helps in creating a well-sequenced and synchronized book in an audio format. The audiobooks made using this technology allow a student to find information that lies somewhere in the middle of the book whenever they require it without having to listen to the whole recording from the beginning to end.

“Initially we started with the cassette. But the process required a lot of tapes and wasn’t handy. Then we recorded them in mp3 format. The files were small but weren’t of much use for students when they wanted to go through the important points only. That is why we introduced the DAISY system to Nepal all the way from Japan,” states Ramesh Babu Tiwari, general secretary of the National Human Rights Protection Forum for Disable Nepal.

However, Tiwari laments that they have only been able to reach about a 1000 students so far. Many are still not able to get a hold of the audiobooks until the very end of the semester. Also, they aren’t able to produce books of all categories and authors due to copyright infringement issues. Since publication houses and the authors have the right to protest against adapting the books into audio format, they haven’t been able to bring many works out as audiobooks.

“Not all publication houses are generous enough to allow us to convert their books. Some let it go as it’s for a good cause while some have even gone on to file complaints against us. Navigating this has been one of the toughest challenges for our organization,” says Tiwari adding that the government could take the matter into its hands and grant permission for any work to be converted into audio format for blind students. “This way visually impaired students can have more resource materials at their disposal,” he adds.

Gyawali says there’s a lot that remains to be done if education is to be easily accessible to blind students but, unfortunately, the issue isn’t been properly tackled. “Everyone knows there’s a problem, but no one does anything about it,” he says adding that, for starters, finding exam writers for blind students could be something the college or university itself could facilitate. Adhikari too agrees and says that, in a case where the education system isn’t blind people friendly, that’s the least that can be done.

“There is a need for more Braille books and audiobooks. And also training teachers on how to teach blind students could help. But these aren’t things that are going to happen overnight. So, in the meanwhile, don’t make things difficult than it already is by having us scour around for writers,” she concludes.

Coronavirus outbreak is a global pandemic that has ravaged the world instilling anxiety, fear, and negativity in almost every one... Read More...