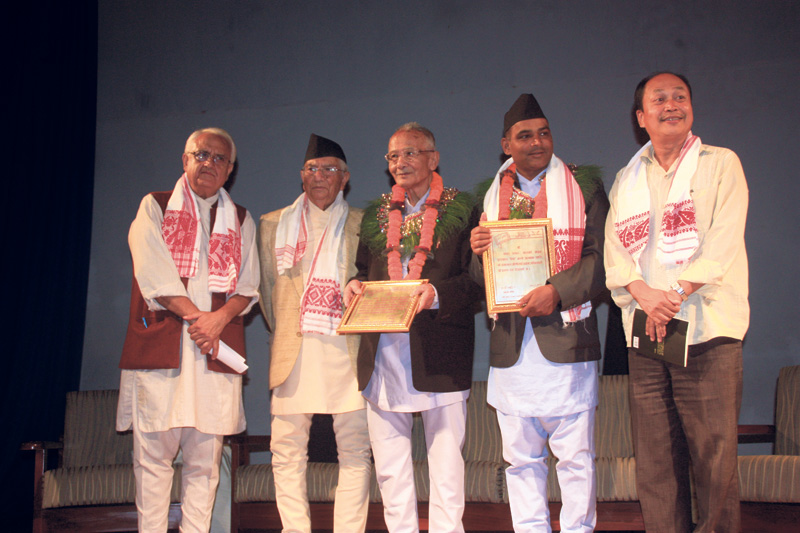 Chettri, an Assamese author of Nepali origin, was recognized for his more than sixty year long contribution to Nepali literature. While Joshi received the Madan Puraskar prize for his collection of stories ‘Aina’.

Each of the winners received certificate and a cash prize of Rs 200,000.

“My relationship with Chettri is as long as the history of Madan Puraskar. I’m glad that he traveled all the way from Guwahati at our invitation,” said Dixit. Chettri revealed that half of the prize money will be donated for the welfare of earthquake victims.

Joshi, whose work was declared the winner out of seven shortlisted books, said that his stories in ‘Aina’ don’t represent big issues but are grounded in small but sensitive issues.

This is the 60th anniversary for Madan Puraskar Guthi that has been giving away the Madan Puraskar award since 1956 and the Jagadamba Shree Puraskar from 1988.

KALIKOT, Dec 9: Durga Bahadur Rawat, candidate from Maoist center has won for the House of Representatives from Kalikot. ... Read More...

KATHMANDU, Nov 11: Grande International Hospital (GIH) has been awarded as the 'Best Hospital of the Year' by Frost and Sullivan... Read More...