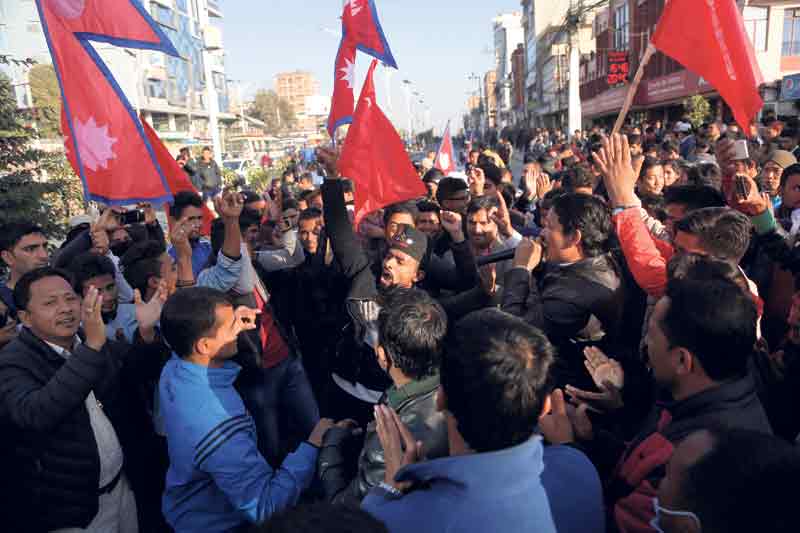 BUTWAL, Dec 4: Life in western and mid-western regions of the country has remained tense for the past five days as protests against the constitution amendment bill introduced to spilt the hill districts from Province 5 continues on Sunday.

A total shutdown of education institutions, factories and halt in transportations has left the locals of Rupandehi district in severe crisis. The locals as well as political leaders continued their demonstrations in various crossroads from early morning on Sunday. The protests completely paralyzed Bhairahawa, Butwal and other cities of the district.

An all-party meeting on Saturday evening has decided to manage the protests against the amendment bill in a dignified manner, informed Bal Krishna Pandey, district chairman of
All Nepal National Free Students Union (ANNFSU), student wing of CPN-UML.

According to Lila Giri, central committee member of CPN-UML and party in-charge of Rupandehi, they have allowed movement of press vehicles, ambulances and also vehicles transporting milk, vegetables, cooking gas, and those of security personnel.

Along with Rupandehi, protests have also been intensified in Gulmi, Palpa, Arghakhanchi, Rolpa, and Pyuthan among other hill districts that will be affected by the division.
Locals of Kapilbastu joined other hill districts on Sunday to protest the splitting of Province 5. Terming the bill as 'conspiracy',  the United Struggle Committee organized various programs in the district to stage demonstrations. They also declared 'shutdown' of the district.

An 83-member committee was formed to protest the decision after the amendment bill was registered at the parliament last week. The committee includes local leaders of CPN-UML, Nepali Congress, Rastriya Prajatantra Party (RPP), and Rastriya Janamorcha among other parties.

“The committee meeting held in the district headquarters Taulihawa has decided to organize district-wide protest to thwart the government's proposal to divide Province 5,” said Jhabi Pokharel, district chairman of CPN-UML, who is also the coordinator of the committee. He also informed that protests would continue unless the government withdraws the amendment bill.

Issuing a statement on Sunday, Abdul Rajjak, district president of Nepali Congress in Rupandehi has instructed his cadres not to participate in protests organized by the main opposition, CPN-UML. Stating that the amendment will bring huge relief to the country, Rajjak said the ongoing protest is against the spirit of the country.

CPN (Maoist Center) of the district also has not shown its participation in the ongoing protests.