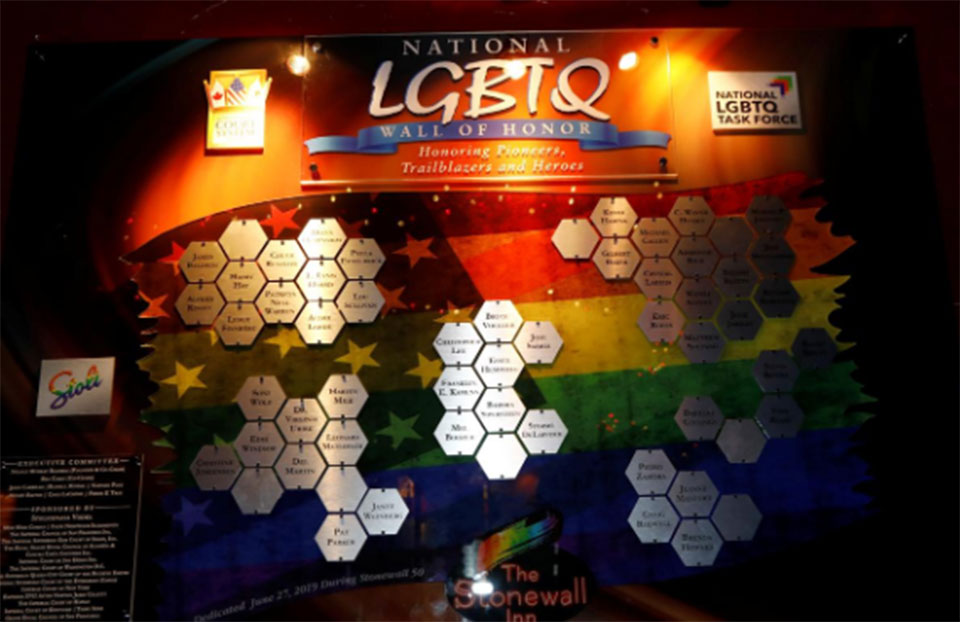 The National LGBTQ Wall of Honor is seen hanging at the Stonewall Inn to honor leaders of the gay liberation movement in New York, U.S., June 27, 2019. REUTERS/Shannon Stapleton

NEW YORK, June 28:  A half-century after the launch of the modern LGBTQ rights movement, 50 trailblazers in the struggle for equality were honored on Thursday with the unveiling of a wall of honor inside New York’s historic Stonewall Inn.

The ceremony fell on the eve of the 50th anniversary of the Stonewall uprising on June 28, 1969, when the Greenwich Village gay bar’s patrons fought back during a police raid, sparking days of sometimes violent demonstrations to protest harassment.

Lesbian, gay, bisexual, transgender, queer (LGBTQ) activists are still fighting for the achievements of their predecessors to be recognized.

“A community, indeed, a civil rights movement, that does not know where it came from ... doesn’t really know where it’s going,” San Diego City Commissioner Nicole Murray-Ramirez, the wall’s founder and long-time LGBTQ activist told people gathered at the Stonewall.

The ceremony was one of the many events and dedications throughout the Stonewall 50 World Pride celebration in New York, a series of days dedicated to observe LGBTQ advancements.

All of the honorees are deceased. They include musician and AIDS activist Michael Callen, a gay man who was one of the first to publish the tenets of safe sex, and Marsha P. Johnson, a black transgender woman who is reputed to have thrown the first brick at the Stonewall riots.

Two others are considered martyrs of the LGBTQ cause: Harvey Milk, the first openly gay elected official in California whose assassination made him a martyr of the gay community and Matthew Shepard, a gay college student whose murder in 1998 garnered national attention; and others.

Since the riots, the Stonewall Inn has been completely remodeled. What was once an underground dive bar is now a two-story lounge with a large pool table and lush wood paneling.

“There are some people honored here who have done amazing things, that the world doesn’t necessarily know about,” said Richard Dworkin, a musician and the former partner of Callen.

While the main point of the ceremony was to honor the achievements of the past, advocates also focused on the battle to keep LGBTQ rights. Many voiced their concerns of losing some of the gains as the Trump administration makes anti-LGBTQ policy decisions aligned with religious, conservative Republicans.

“We need to figure out a way for that to not happen,” said Judy Shepard, the mother of Matthew Shepard. “And the way we do that is to know our past and work towards our future.”

What next: Midterm elections or a full-term Oli govt?
23 hours ago

WHO expresses serious concern over fast-spreading pandemic in Nepal, calls for emergency aid
3 hours ago

Beholding a tour to space!
12 hours ago