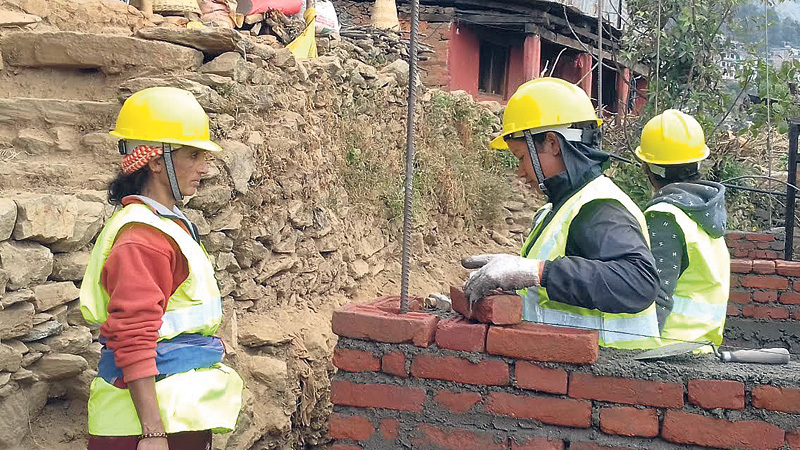 The contributor for Republica.
kriti.bhuju@gmail.com

With male members away, women have started rebuilding their homes destroyed by 2015 earthquakes on their own

With the urgent need to reconstruct their own homes and to contribute in reconstruction, women in quake-affected districts are getting construction-related trainings provided by various organizations.

During my recent visit to Okhaldhunga, I met Radhika Majhi, 35, of Majhigaun village who had been struggling to earn a living to feed her daughters, two sons, and a paralyzed husband. When she heard about Employment Fund (of HELVETAS Swiss Intercooperation Nepal) providing masonry training, she applied for it, full of hope and confidence.

“During the training, I along with my friends built my own house incorporating earthquake resilient technology. Initially, they did not trust me. But when they saw how I work, they have been asking my help to build earthquake-resistant houses,” said Majhi.

Like Majhi, other women in Okhaldhunga are also taking part in mason training. This was a new experience for most women. For it is still believed that construction related works such as masonry, carpentry, plumbing, or electric wiring are men’s jobs and women cannot do them well.

But this notion has changed after the earthquakes of 2015 destroyed tens of thousands of houses in quake-affected districts, including in Okhaldhunga. Most men have left the country for foreign employment or are involved in other works to sustain the family.

So women are participating in skills training provided by different organizations. This is happening in almost every earthquake-affected district of the country.

Juni Kumari Pariyar, a local of Katunje VDC-2, Dhading, has been struggling to earn bread and butter for her family. While young she could not go to school due to her family’s poverty. After marriage, her husband went to work in Saudi Arabia but could not send her enough money to support the family. When her house collapsed in the quake, it only added to her woes. She had since been living in a temporary shelter.
It was then that she came to know about a 50-day on-site mason training. And this changed many things. “I not only learnt the skills of building earthquake resilient house but also built my own house during the 50-day training,” said Pariyar, “I have been called by the villagers for construction work and I have since been earning enough to fulfill my family needs.”

The decade-long armed conflict and poverty have forced people of rural villages to migrate for better jobs and better future. Uneducated and unskilled as they are, most go to the Gulf and Malaysia, leaving only women, children and the elderly in the village.

With male members away, women have started taking up responsibility of rebuilding their houses. So the number of women receiving training on construction of safe houses has increased. Their participation in rebuilding initiatives has brought visible outcomes.

Reconstruction is taking place at a fast clip in the villages with more female-headed households. It is clear that if the government and non-government organizations working on reconstruction prioritize women’s rights and needs in such settlements, it will have positive impact on post-quake reconstruction.

According to the Post Disaster Needs Assessment (PDNA), conducted immediately after April, 2015 earthquakes, 55 percent earthquake casualties were women and 26 percent of the damaged homes were women-headed households.

A woman in Nepal (whether she is a housewife, a job holder, or a daily wage earner) has to work longer hours compared to her male counterpart. Studies show women work three to four more hours than men. But when it comes to ownership of land and houses, it is the men who rule the roost.

Development organizations working on reconstruction have promised to give priority to women, specifically vulnerable single women, widows, elderly and those suffering from HIV/AIDS. This commitment now needs to materialize.

Reconstruction is also an opportunity for social reconstruction, to build a society where women’s needs are addressed and they can contribute for Nepal’s overall development.

Radhika Majhi and Juni Kumari Pariyar are just two examples of how women can make a difference in reconstruction. The government should help bring such women to the forefront and encourage more women to help with building earthquake resilient communities.