Let’s make use of them (Commentary) 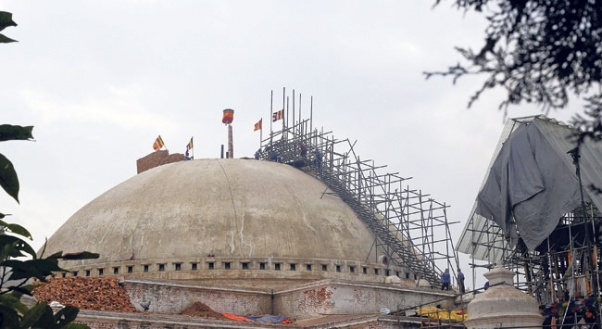 Nepal has come a long way with a brand new constitution. It now needs to flaunt it.

After one year of Nepal earthquake, if we look back and try and see where and how relief and reconstruction work lost priority and politics took over with the result that despite all support from across the world, the reconstruction work in Nepal has been slow and way below what the world expected from the country.

Let’s reconstruct the story. The earthquake strikes and tremors kept coming for next three months almost daily. Nearly 10,000 people were left dead; most houses and infrastructure were either flattened or left with a deep scar. The damage was done.

World reacted promptly and before tragedy-struck Nepal is could realize the scale of damage, the help had started arriving, and then pouring in. It was the world’s turn to pay their tribute to what they loved about this beautiful country. But soon, this spirit was dampened by brazen outcry against the presence of foreign aid workers and media in the country. Those who simply could not stop themselves landing in Nepal after looking at the tragedy began to return.

This was followed by International Conference on Nepal’s Reconstruction in April 2015 where the world community together pledged $4.5 bn, with India’s contribution at $1 billion being the highest. Soon after this conference, we stopped hearing about relief and reconstruction work and day-to-day politics took over.

Why? This can be explained only by Nepali PM’s masterstroke of promulgating the constitution once the major political parties agreed on major disagreements. That was a moment that had to be captured otherwise it would have slipped away. And this 75-year old bachelor politician knew this only too well. He knew this too well enough that along with his country, his moment was here and now. Rest is history.
But still, why did it affect the relief and reconstruction work in Nepal, the area in which the world’s interest lies? Once the foreign media and aid workers were gone, the tardy progress on this front did not get the same focus from the Nepali media, which was occupied with the bigger drama unfolding before and after the promulgation of the constitution. Logically, this looks fine. But it wasn’t.

With a brand new constitution and Indian blockade behind them, Nepal has come a long way from the old days of monarchy and recent Maoist insurgency. They have given the world the hope that no matter how bitter the past is, it can always be mended. The way the constituent assembly took extensions and was reconstituted with a fresh election when it was not able to deliver the constitution, Nepali politicians have shown Himalayan commitment and nerves of steel. They now need to flaunt their success.

However, Nepal also needs to improve its score on the reconstruction front. The earthquake has left behind such a deep trail of devastation that the restoration and reconstruction work will call for an overhaul of important laws and policies apart from physical repair and reconstruction. Environmental protection is crucially significant in policy planning if we have learnt anything from this calamity. That’s a niche area and Nepal might need international experts to help it out. So will it for every other area of reconstruction because of scale of the damage the earthquake has brought about.

The international community has generously donated to the cause so far. Now, they would like to see the progress and result. Has enough progress been made to impress the donors? And what is more important is if the Nepali media does not highlight these issues because of their preoccupation with day-to-day affairs, who will?

Giving an issue the color of pro or against India or China is easy but that can’t be sustained because of the strong fundamentals that buttress the relations between the two countries. Being big countries with strong economies, India and China have very strong, at the same time very complex, bureaucratic set up that can at times be acutely insensitive to feelings of small countries. Indian blockade can pass off as an example.

But all is not lost for the smaller countries in the region. In the neighboring Myanmar, Aung San Su Kyi’s coming to power is a great morale booster. Her elite family background and education notwithstanding, her political life and resistance, her sacrifice and determination echo far beyond the mountains of her country. But what is most inspiring is her silence and smile. She can win both India and China with these two great endowments. Let’s learn this art.

In its long and arduous journey of reconstruction, Nepal would need many such inspiring personalities on its side. In this context I remember a visit by Prof Yunus from Bangladesh in April 2012. His visit was organized by a leading business conglomerate. More of similar initiatives will keep Nepal in good humor and flush with supply of talents from different universities and institutions of the neighboring countries. We have Kailash Satyarthi and Mala Yusufzai. We have Amartya Sen and more in the making. Let’s make use of them.

US urges Nepal to make optimum use of TPA facility

KATHMANDU, April 22: The US has urged the government and the private sector of Nepal for maximum utilization of new duty-free... Read More...

Our problems are just illusions, let’s deal with them

Problems! Well, we face it every day, every moment and everywhere. ... Read More...

Health desk mandatory at grade12 exam center, not more than 20 students in a room
25 minutes ago