Lessons on the go 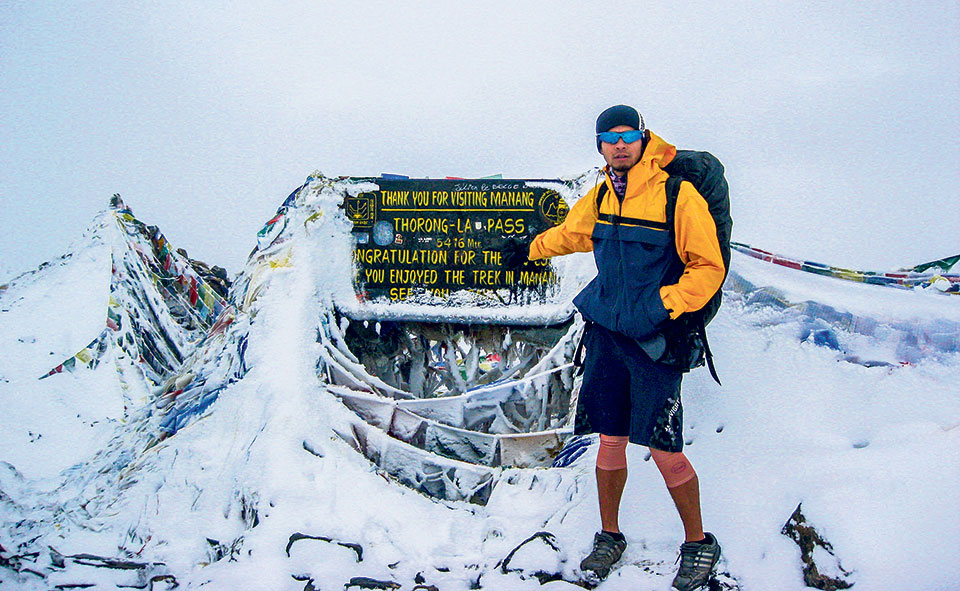 Ujjwal Rai claims that only two things in this world excite him: Walking and trekking. Trekking is exhilarating because it gives him a chance to learn from different cultures, traditions, and food habits. It helps him explore the unexplored. And traveling by foot enables him to discover different terrains and brings him close to nature.

His exciting journey of going to different places all started because of a friend. After high school, a friend told him to get a job that involved a lot of walking because Rai was very fond of it. He would never take public transport in Kathmandu.

Rai thought the only job that his walking abilities would get him was in marketing. Although he wasn’t very interested he thought of giving marketing a chance. Luckily his friend introduced him to a cousin who was involved in the tourism industry in Nepal.

Today, he works as a tourist guide and goes to 20-25 different destinations every year for work and for leisure. Traveling, for him, is more than just a means of livelihood. It’s work that he enjoys and looks forward to doing every single day.

A kid’s adventure
Rai was just 12 years old when he planned his first solo trip. He asked his parents if he could go on a trip to Rara. His parents obviously refused to allow him to do so as he was too young. Stubborn as he was to explore new places, one morning Rai took out Rs 100 from his mother’s purse, packed a pant and t-shirt in his school bag, and left home for Rara.

“I have always been good with Nepali geography and directions. So I knew where I was heading. I knew which highway led to which place,” says Rai. So he set out his own little adventure, walking.

After walking for several hours, Rai was already very tired. The sun was about to set and he could spot no safe place at the highway. He tried to ask several passing by trucks for help but no one would stop for him. A few kilometers before Narayanghat, there was a traffic jam on the highway. Taking advantage of the situation, he slyly climbed up a truck and got down when it stopped for dinner at Narayanghat.

That night he slept beside a tandoor (cylindrical oven used to make Indian bread) at a motel in Narayanghat because he needed the warmth. In the morning he realized that his bag with his only pair of clothes was stolen. He was also hungry and had nothing to eat. So he went around looking for a job at different hotels before he found one person who promised to feed him after he washed their utensils.

“I got my lunch after washing their dishes continuously for three hours,” says Rai.

It took him about nine months to reach Kalikot. He was still determined to reach Rara and see the beautiful lake. However, civil war was going on in Nepal at that time and he encountered a horrific crossfire which made him return home. He was too scared to carry on any further and thought he would die if he continued on his journey.

Working at different places he managed to collect sufficient funds to get back home by bus. Back home, an astrologer had told his mother that her son could possibly be dead. So she had given up hope of his return a month after he went missing. He says he lost a year at school but learnt many more things about life in those nine months.

As an intern
Before Rai became an authorized guide, he was made to intern for a few months. As an intern, he literally had to do anything and everything that he was told to. For his first trip, Rai was made to go to the Everest Base Camp as a porter.

Rai recalls that journey as one of his toughest experiences so far. Even today he distinctly remembers climbing the steep stretch that led to Namche Bazaar. It was also his first time at such high altitude. He remembers crying and being in a lot of pain the whole time. The trek was additionally difficult because he was carrying a huge load as a porter.

Exotic Antarctica
Rai’s first experience of traveling in an ocean was when he was heading to Antarctica. His journey from Argentina to the Antarctic Peninsula was an adventurous one.  The passage of water that joins Argentina to Antarctic called the Drake Passage is usually filled with high waves and turbulences. Rai’s first exposure to such turbulences led to motion sickness but, he claims, the rest of his trip was filled with adventures and new learnings.

One of his most memorable experiences was swimming in the water that was freezing at minus two degrees. He says he remembers feeling completely numb after jumping in the water. For him, the cold water felt almost as if someone was stabbing him from all sides. “The first question I asked the doctor after coming out of the water was if I still had my ears. I could not feel my ears at all,” says Rai.

After that, jumping in cold water almost became like an addiction for him. Rai now goes swimming in various ponds at the highest regions of Nepal.

He also learnt a lot about tourism and teamwork while in Antarctica. “There every institution involved in the tourism industry works as a team. That is how they progress. But in Nepal we all involved in unhealthy competition and we work as rivals,” says Rai. In the future, he intends to implement those learnings in order to advance and better Nepal’s tourism industry.

Lessons, trips and loads of fun

One of their most notable works is the documentary they did on the honey hunters of Nepal. Titled “Mad Honey... Read More...

The alternatives for dealing with nuclear proliferation do not necessarily improve with the passage of time. ... Read More...