Lessons from the past 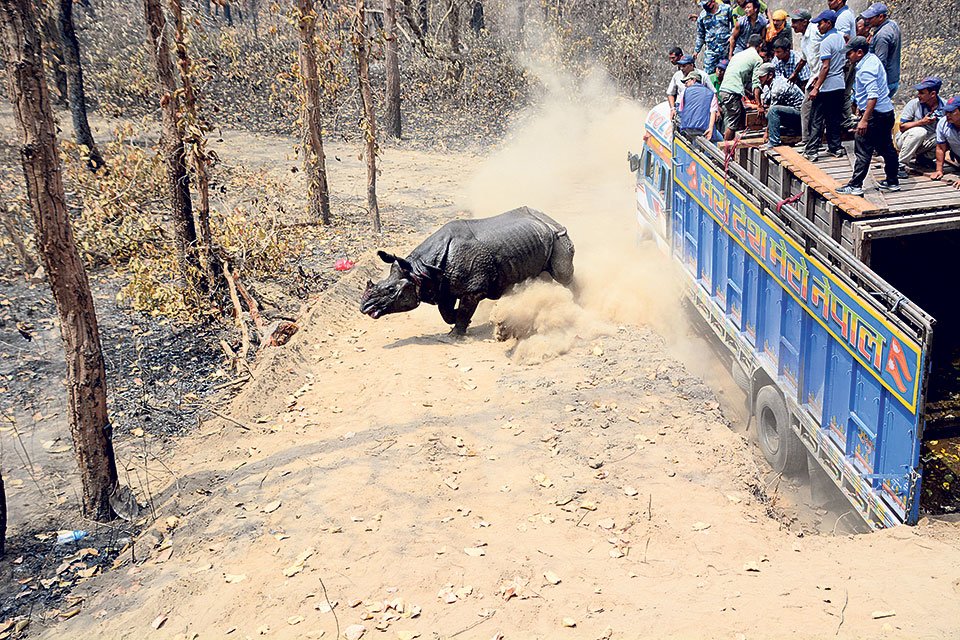 The last blackbuck of Shuklaphanta National Park was hunted down when modern conservation had just started in Nepal in 1970s. Between the sixties and seventies, swamp deer and wild water buffalo became locally extirpated from Chitwan Valley while the rhino population in the vast expanse of the Rapti river floodplain was at a record low.

There is a common angle to these demographic events: These are all herbivore assemblages which stopped to exist locally at various places when agricultural expansion was at its peak in the country.

However, thanks to the proactive steps taken by the government, with the establishment of Chitwan National Park in 1973, the rhinoceros population started to grow. Likewise, many protected areas were established across the nation to conserve and preserve the species. This was an important strategic move made by the Government of Nepal to safeguard the founder populations of the almost lost species in due course of time.

In the last five decades, the number of the otherwise vanishing species saw a steady rise in various protected areas of the Tarai Arc Landscape –rhinos in Chitwan, blackbucks in Bardia, swamp deer in Suklaphanta, and wild water buffaloes in Koshi Tappu. There was a risk, however. It was like keeping all the eggs in one basket.

Considering this, in 1986, the Government of Nepal started the first official wildlife reintroduction program in Bardia National Park when 13 rhinos were released across the Karnali River floodplain and five were translocated to Shuklaphanta National Park in 2000. This was indeed an important milestone in the conservation history of Nepal to bring back the waning population to their former range. However, conservation efforts faced a major setback during the insurgency period when rhino poaching became a harsh reality and challenge that demanded a year-round 24/7 surveillance.

A successful outcome of conservation efforts – translocation and surveillance – carried out by the Government of Nepal and other conservation organizations over the years led to the achievement of a historic conservation win – the first time that Nepal achieved 365 days of zero poaching of rhinos in 2011.

In 2016, after adopting appropriate habitat management and protection measures, the government made a bold move to bring back the rhino populace in Babai valley through translocation from Chitwan National Park. Additionally, in 2017, five more rhinos were translocated to Shuklaphanta National Park from

Chitwan. This was a crucial step in helping revive the critically small assembly of rhinos in Shuklaphanta. Furthermore, the birth of a rhino calf in the national park in October 2017 stands as a good sign of population recovery with more than 50 rhinos in the western lowland protected areas of Nepal.

Given the immense success in rhino conservation, conservationists and local communities seem enthusiastic about the government’s decision to bring back original herbivore assemblages in the historic range along the Tarai ecosystem.

In the last few years, blackbucks have been reintroduced in Shuklaphanta National Park from Krishnasar Conservation Area in Bardia, central zoo, and other captive sites across the nation. Likewise, swamp deer were successfully relocated to Chitwan National Park from Shuklaphanta National Park; in 2017, wild water buffaloes were brought to Chitwan from Koshi Tappu. Both the species are kept within an enclosure for adaptation and monitoring before being released in the wild.

All the efforts to bring the four mammals, listed as protected species of the country, back to their former range has paid off. There are still considerable challenges. Monitoring the performance of the reintroduced species is an immediate next step. In addition, measures such as investments in safeguarding the small population, managing the habitat, enhancing protection procedures, and taking effective measures to mitigate human-wildlife encounters should be taken because only an integrated approach can ensure a safe environment for the species as well as humans.

There is a huge potential in scaling up flagship efforts to revive the native species populations in their former habitats in the Tarai region. Reintroducing herbivores such as gaur in Bardia, sambar in Shuklaphanta and blackbuck in Chitwan could come as an important proposition in the near future. However, the next plan of action will invariably depend on the performance of the reintroduced assemblages in their former habitat.

The writer is the Technical Advisor-Biodiversity Conservation for Hariyo Ban Program and Wildlife Goal Lead at WWF Nepal.

26 arrested for smuggling drugs in past one month

KMC collects Rs 8.5 m in revenue in past FY

KATHMANDU, July 19: The Kathmandu Metropolitan City (KMC) has collected around Rs 8.52 million in revenue as fees from people... Read More...