Lessons from successful renovation of Bauddha 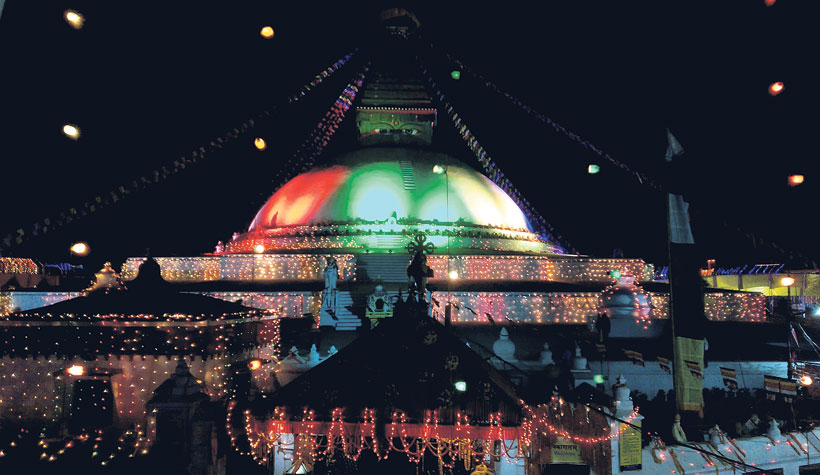 Bauddhanath becomes the first UNESCO World Heritage Site to complete renovation
KATHMANDU, Nov 23: The inauguration of the Bauddhanath Stupa on Tuesday after its speedy renovation following the damages during last year's earthquakes 'has set an example' to many heritage sites that are currently undergoing reconstruction in a sluggish pace.

Also listed as a UNESCO World Heritage Site, the Bauddhanath Stupa has become the first heritage site to complete renovation after the earthquake hit the country some 19 months ago. It was reopened to the general public on Tuesday following two-day purification ceremony and a day-long consecration ceremony.

The renovation works of the stupa that started on February 11 this year took about just nine months to complete. Relying on assistance from Nepalese living in various countries and foreign donors, the renovation was completed on the first week of November with a total cost of Rs 230 million, according to Bauddhanath Area Development Committee (BADC), a body under the Ministry of Culture, Tourism and Civil Aviation.

"The reconstruction works were community-driven with strong support from various donors. Strong unity among the locals is the foremost factor behind such a speedy reconstruction," said Sampurna Kumar Lama, chairman of BADC.

According to him, the renovation works faced various hindrances and political interferences, but they were able to overcome all the obstacles by taking them as challenges instead of considering them as stumbling blocks.

"Lengthy bureaucratic process was one of the major challenges for us. It took us at least a week just to purchase a cubic feet of wood through the formal process. But our sheer determination persisted, and we were able to bypass the hassles as we received donation of wood, gold and other materials needed for renovation works," he added.

Speaking at the inauguration program, Prime Minister Pushpa Kamal Dahal said the successful reconstruction of the Bauddha Stupa has provided encouragement for reconstruction of other quake-hit monuments. He also lauded the community for taking initiative to reconstruct instead of depending on the government.

Meanwhile, Minister for Culture, Tourism and Civil Aviation Jeeban Bahadur Shahi admitted the snag in the existing bureaucratic system and said that the existing laws preventing timely reconstruction of the quake-affected structures should be revised. "Now that the renovation of the Bauddhanath Stupa has been successfully completed, its preservation is the next challenge," he added.

Likewise, renovation of the iconic Kasthamandup temple has not yet begun, while Changu Narayan Temple's renovation is expected to complete this year.

Records at the DoA show that 133 monuments were completely damaged by the earthquake while around 600 were partially damaged.

“We can learn a lot of lessons from the successful renovation of Bauddha. If locals unite and show determination to restore their heritage, there is no need to wait for the government help,” said Dahal.

The Lux Kamana Film Award 2074 felicitated several talents of the Nepali film industry amid a program organized at the... Read More...

In pictures: Bauddha locals resort to arson over cabby's death

KATHMANDU, Dec 11: Bauddha Nayabasti area remained tense throughout the day on Sunday after the locals took to the streets... Read More...