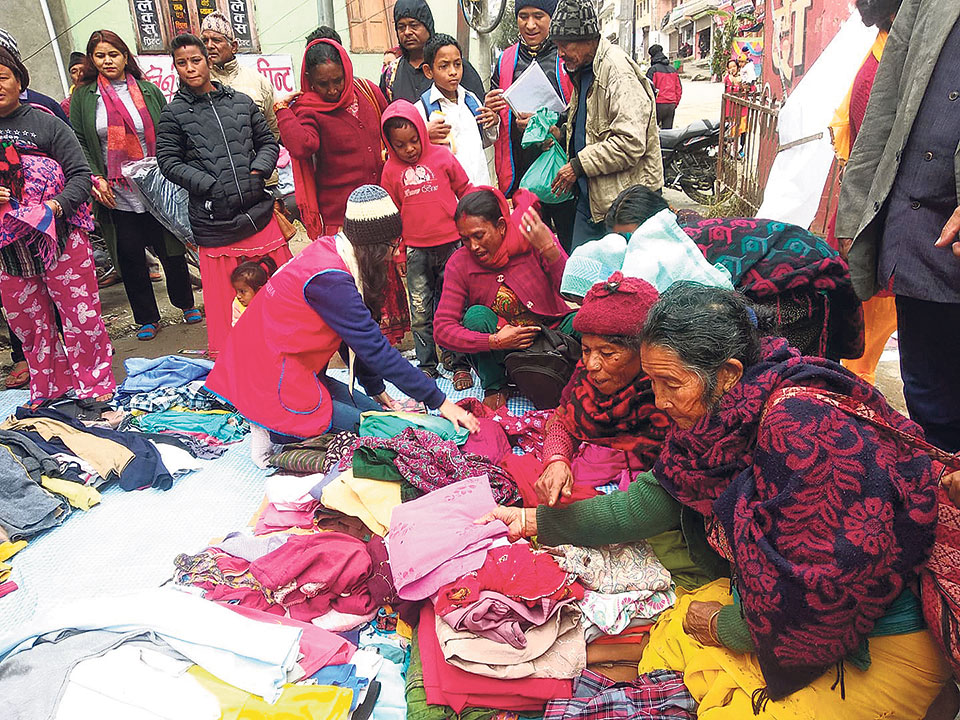 GORKHA, Dec 15: As the temperature has dropped significantly in the last few days, Leo Club has started  distributing clothes for free to the needy in Gorkha district.

According to Bidur Ballav Bhattarai, president of Leo Club, it has distributed 'used clothes' to the needy and poor people after washing it. The club has also distributed the clothes – in stock in a cloths store in Gorkha – to the needy.

The club said that it has started the campaign aiming at helping people with weak financial situation in the district. “The club distributed a total of 100 clothes on Saturday alone, said Barsha Dhakal, secretary at Leo Club of Gorkha, adding that the club will distribute clothes every Saturday for the next two months at different places in the district.

Locals and cloth entrepreneurs have also supported the campaign of the club. The club also aims to distribute free clothes in other parts of the country in this winter season.

The club has also urged the locals to donate used clothes for the needy people. According to President Bhattarai, the campaign will continue till mid-February. This is the first time any organization is distributing free clothes in Gorkha.

The needy people were also seen happy after getting clothes for free from Leo Club. Prakash Chandra Gandhari, a resident of Gorkha Municipality-7, shared that he was happy to get pants and a jacket for the winter from the organization.

Likewise, 60-year-old Bibha Nepali also got a sweater and trousers. Nepali, who is a laborer, also said she was happy after getting clothes for free from the organization.

According to Bhagwan Babu Maskey, president at the district branch of Nepal Redcross Society, the campaign of Leo Club has been effective and helpful for the needy people.

It has also opened clothes bank outside Kathmandu as well. They have clothes banks in Chitwan, Dadeldhura, Dhangadhi in Kailali and Biratnagar in Morang. The group aims at expanding its service to all over the country.

POKHARA/GORKHA, May 12  It will take about two days to collect ballot boxes in some of the rural municipalities of... Read More...

GORKHA, Aug 20: As many as 33, 871 quake survivor locals in the district have received grant provided by the... Read More...

KMC to run free ambulance service during Dashain
27 minutes ago