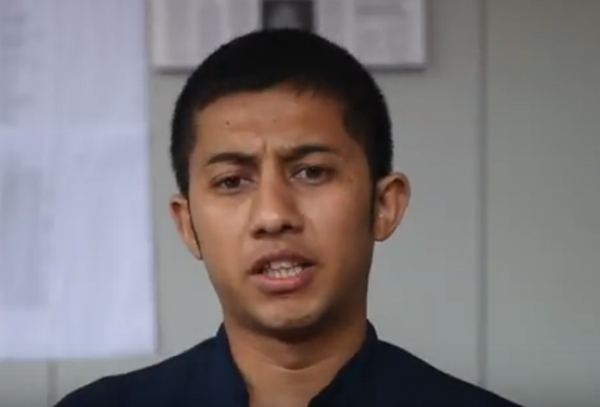 KATHMANDU, Aug 31: Former Maoist child soldier Lenin Bista who was barred from flying to Thailand to attend a conference has filed a writ petition at the Supreme Court on Friday.  He was prevented from boarding a flight at the Tribhuvan International Airport on August 24.

The petitioner has claimed that his right to equality and the freedom of expression and association were violated by the government. Ministry of Home Affairs, home minister Ram Bahadur Thapa, special advisor of the home minister Surya Subedi Pathik, the Department of Immigration and Tribhuvan International Airport Immigration Office have been named defendants in the petition. Bista has asked the apex court to nullify the letter issued to him by the Department of Immigration and allow him to go anywhere till the visa period.

The initial hearing of the petition has been scheduled for Sunday.

Immigration officials at the Tribhuvan International Airport on August 24 had stopped Lenin from flying to Thailand, where he was supposed to attend a five-day conference titled “Youth in Conflict Areas: Healing and Peace Building through Social Engagement”.

Bista was stopped soon after he completed immigration formalities at the airport.

Bista had a valid passport and visa and his flight was already booked by the event organizer, Asian Resource Good Governance. Bista was invited to the event to share his experience of how the Maoists used child soldiers during their armed insurgency and ignored them after joining the mainstream politics.

After Bista refused to return from the airport without being given a reason in witting for being turned back, an immigration official had handed him a letter. The letter stated that Bista was barred from leaving the country as he was found not having any recommendation or permission in writing from the government authorities concerned.

PMO seeks clarification from ministry over barring of Bista from flying

KATHMANDU, Aug 28: Office of the Prime Minister and Council of Ministers has sent a letter to the home ministry, seeking... Read More...