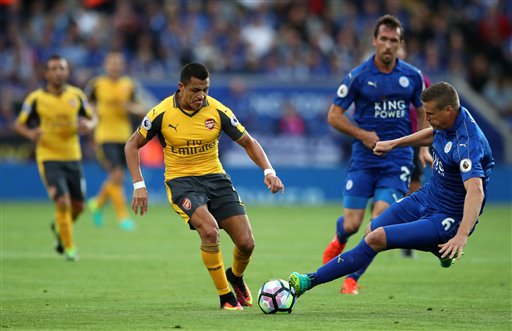 LEICESTER, Aug 20: Leicester is still searching for the first win of its Premier League title defense after drawing 0-0 with Arsenal on Saturday.

Jamie Vardy and Riyad Mahrez, who were both heavily linked with moves to Arsenal in the offseason, had the best chances for Leicester at King Power stadium after being played through in the second half. Vardy blazed wide and Mahrez's shot was saved by Petr Cech.

Leicester opened the season with a 2-1 loss at Hull and so far hasn't repeated the dynamic performances that helped the team surge to an unexpected title triumph last campaign.

"You never quite know what form you are going to hit, (but) this was much more like us," Leicester defender Robert Huth said. "Hopefully we'll play a lot more like that."

Arsenal also has one point from its opening two games, having already lost 4-3 to Liverpool, and never seriously tested Leicester goalkeeper Kasper Schmeichel. That will further frustrate fans who are unhappy that manager Arsene Wenger has failed to substantially strengthen his squad this offseason.

"It was a game of top-level intensity and I believe we responded well to last week's disappointment," Wenger said. "Leicester are a good team — they did not win the league and only lose three games last season for nothing."

Leicester had two decent penalty shouts turned down — especially Ahmed Musa in the last minutes when he appeared to be tripped by Hector Bellerin.

In a further blow to Leicester, new signing Nampalys Mendy went off injured early in the second half after getting his studs caught in the turf and appearing to twist his foot.

Leicester and Arsenal were the top two in the league last season.