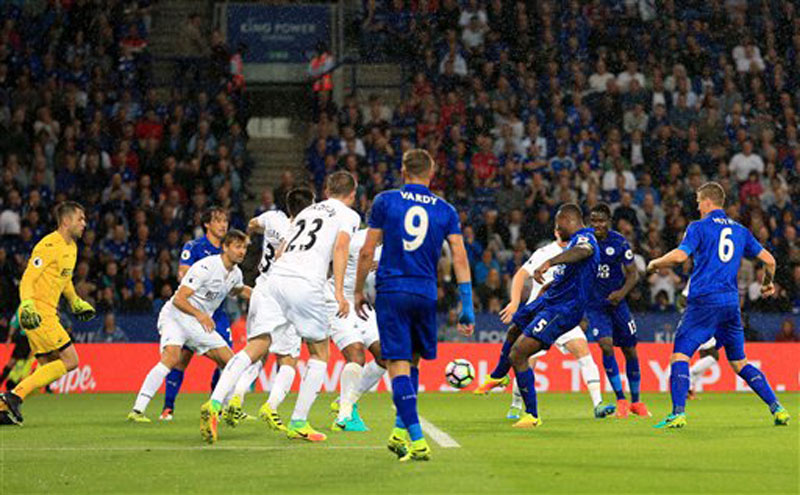 It should have been an even bigger win for the champions in a dominant display at a rain-lashed King Power stadium, with English football's player of the year Riyad Mahrez having a 56th-minute penalty saved.

And it wound up being a nervous end for the hosts after Leroy Fer pulled a goal back for Swansea in the 81st.

Vardy put Leicester ahead in typical fashion when he ran onto a lofted pass forward by Danny Drinkwater, nudged the ball forward, and thumped a finish into the net off the post in the 32nd minute. The England striker is off the mark this season after scoring 24 goals in Leicester's surprise run to the title in the 2015-16 campaign.

Morgan smashed home the second goal in the 52nd minute at a corner, after the ball had popped up off center-back partner Robert Huth's arm as the pair challenged for a high cross.

Aside from Mahrez's failure from the penalty spot, the other negative for Leicester was an injury to goalkeeper Kasper Schmeichel, sustained as he came out to challenge Swansea striker Fernando Llorente.

Leicester, which won the league at odds of 5,000-1 last season, started its defense of the title with a surprise loss at Hull before drawing 0-0 at home to Arsenal.

This was Claudio Ranieri's 100th win as a Premier League manager, including a spell at Chelsea.

MANCHESTER, Oct 22: Glance at the Champions League standings and it would seem all is just fine at Leicester City... Read More...