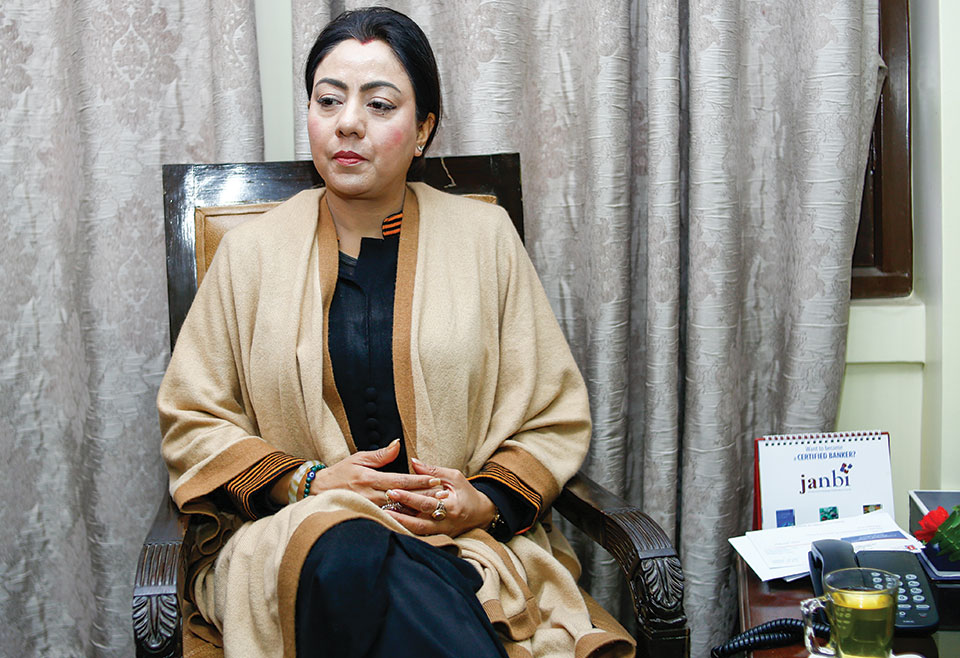 In April 2017, Bhawani Rana was elected President of the Federation of Nepali Chambers of Commerce and Industry (FNCCI).

Representing approximately 900 private enterprises across Nepal, FNCCI is the largest umbrella organization of businesses in Nepal. When Rana took over as President, FNCCI had celebrated its 50th anniversary a year ago.

Rana is its 18th President. The first woman President in the history of the organization.

To understand the magnitude of that achievement, consider this. Rana is the only woman among the eight office bearers in FNCCI currently. She is one of only six women in FNCCI’s entire current executive committee of 79 members. And, the current level of female participation within FNCCI is higher than what it has been at any time in the past.

Business clearly remains a place for men. The membership profile of FNCCI’s executive committee makes it clear that so far at least, businesses haven’t yet found the need to promote women to leadership positions.

Rana has been in FNCCI for approximately 15 years, starting as a member with the Federation of Women Entrepreneurs Association of Nepal (FWEAN). She combined business and political acumen in her work at FNCCI.

In 2015, Rana filed her nomination to contest for FNCCI’s President before skilfully withdrawing her candidacy in a way that automatically secured her the post two years later. Rana has plenty of crafty experience to draw from—she comes from a family stepped in politics, business and privilege.

But whatever her antecedents, her ability to break through the men’s business club of FNCCI makes her our hero. For that she is my person of the year for 2018.

Private sector in crisis
With two years remaining in her tenure, will Rana be remembered only as the first female President of FNCCI? Will she do more? Will she repair the state of a private sector in sharp decline?

Nepal’s private sector is in crisis, struggling to find its purpose within the radical political, social and economic changes of the last decade. The private sector has been one of the greatest casualties with the State taking an increasingly larger role in Nepal’s new order.

The current political narrative has cast businesses in Nepal as the business of thieves that have no regard for political, social and economic progress. The public has bought into this narrative. They don’t believe that the private sector has what it takes to support a system that allows everyone to participate and benefit. Wealth remains concentrated. Opportunities extend only to a few that were fortunate to begin with.

In response, Nepalis are looking to government for services, employment, security and economic opportunities. The State is responding to this call, purposefully encroaching upon and eroding the space for private sector. It is successfully portraying the private sector as the greedy villains. The State has cleverly pinned the blame for the lack of progress in most projects on the private sector.

The private sector is visibly losing the battle of public perception.

In mid-December news emerged that government had withheld the passport of several personnel of international firms working on the Melamchi Drinking Water Project. There are differing accounts of what happened. Government claims that the contractors intended to flee without completing the project. The contractors claim they had written to the government to withdraw from the project after authorities unreasonably withheld payments.

In radio, TV and newspapers, government officials quickly shifted blame on to the private contractors. In public perception, the entire private sector was discredited.

Blaming the private sector is a common practice. Through much of 2017 and 2018, transport syndicates were the targets. Then it was vegetable syndicates and shops in Durbar Marg. Government decided that they would build hydro plants themselves because the greedy private sector wanted too high a return for their investment.

In many cases, the related companies, contractors and syndicates were at fault. But these accumulated narratives have damaged the broader opinion of the private sector in public perception. The private sector now has zero credibility.

The election of Pradeep Jung Pandey as President of FNCCI followed by his imprisonment and eventual pardon, for example, significantly damaged the reputation of the private sector. In 2014, Pandey was elected FNCCI President in a bitter election. After his victory, his opponents dragged him to court over a 30 years old corruption case. Pandey claimed he had been pardoned. His opponents argued that he had not.

The case played out in the Supreme Court. Even to the disconnected public, it became obvious that the case was never about justice and everything about political power. Pandey eventually lost the case and was briefly imprisoned. In a negotiated settlement, he resigned from the post of FNCCI President and was promptly pardoned by the President.

To the public, it was never clear whether Pandey’s crime was engaging in corruption 30 years ago or being elected FNCCI president without enough political cover.

Business leaders, and FNCCI, that let Pandey’s case unfold the way it underestimated the broader impact of that episode. Domestically, the case significantly damaged the reputation of the private sector. Internationally, it eroded Nepal’s image as an investment destination.

To Nepalis at home, Pandey’s case made it clear that corruption was directly related to and supported by the nexus between politics and business. Thus, when business leaders speak against corruption, or abuse of power, they appear as hypocrites saying one thing on the outside while fuelling corruption behind the scene.

Business leaders have lost the moral authority to lead the fight against corruption.

Internationally, Pandey’s case made it clear that the institutional rule of law had broken down entirely. Nepal may offer investment opportunities, but investments need to be safeguarded with the right political patronage and protection.

The legitimacy of the private sector as a partner in Nepal’s growth has been damaged.

Against this erosion of public confidence in the private sector, FNCCI has done little to regain trust or offer a counter narrative.

The risk from the failure of institutions like FNCCI isn’t simply that the private sector gets marginalized. The bigger risk is that encroachment of the State becomes deeper. Ultimately, if there is no need for a private sector, what need will there be at all for anything ‘private’?

In an interview with Bhusan Dahal, Rana was asked about her view on the role of black money in the economy.  She responded that she had heard “talk” about the black money but that it hadn’t been formally brought to the attention of FNCCI.

“FNCCI doesn’t take up anything merely on “talk” or rumours,” she said proudly.

Nepal’s private sector is dying a slow and painful death. Here, I formally submit this to you, Madam President, and FNCCI for your consideration. Nepal hopes for an appropriate response.

PGS: An advantage for couples with genetic abnormalities

Tragedy of the Commons

Coffee consumption, overfishing, plastic pollution, and groundwater overuse are some of the examples of the “tragedy of the commons.” Humans... Read More...

Our frontline healthcare workers have remained dedicated and risked their lives to fight against this pandemic. A few thousand of... Read More...