Leftist alliance was long in the making 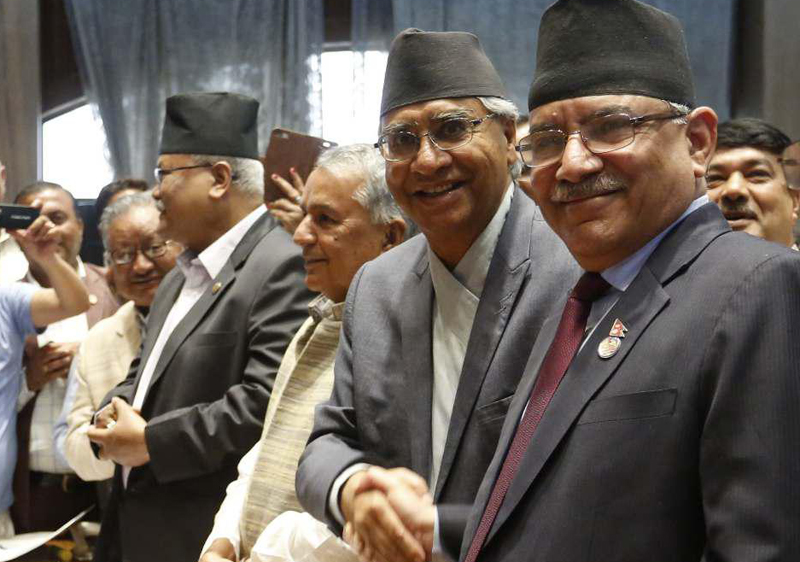 KATHMANDU, Oct 4: Although the electoral alliance and the unity process among the three leftist parties – CPN-UML, CPN (Maoist Center), and Naya Shakti – was formally announced on Tuesday, this was in the making since a long time, particularly after the local level polls held in Province 2.

Only a few key leaders of UML and Maoist Center were aware about the development until the issue reached the UML’s standing committee meeting and Maoist Center’s secretariat meeting held on Monday.

UML leaders Subas Nembang, Bhim Rawal and Ishwar Pokharel and Maoist leaders Narayan Kaji Shrestha and Ram Bahadur Thapa ‘Badal’ were also closely involved in the negotiations, albeit later. UML Vice Chairman Bamdev Gautam had worked as a mediator and close confidante of the two chairmen until the two parties reached the six-point agreement on Saturday.

Naya Shakti Nepal-led by Baburam Bhattarai was brought onboard the new alliance only on Tuesday following a meeting held at the UML’s Parliamentary Party Office in Singha Durbar. With the six-point agreement, it is now confirmed that Naya Shakti will contest the upcoming election under UML’s election symbol - sun. The Maoist Center, according UML Chairman Oli, has some technical difficulties to contest the polls under his party symbol for now.

What led to this development?
Senior leaders of UML and Maoist Center said although the discussions for unification between the two parties had actually begun during the government led by UML Chair Oli, this could not happen after the Maoist Center decided to sever ties with the UML to forge a new alliance. The relations between the two parties soured after the top leaders began exchanging barbs.

Nevertheless, UML leader Bamdev Gautam was persistently trying for the unification, winning the trust of both Oli and Dahal.

As a matter of fact, UML Chairman Oli, who would otherwise not spare any opportunity to spit venom against Maoist Chair Dahal in almost all public functions after the fall of his government, had softened his tone in recent months, while coming down heavily against NC leadership.

Party insiders said the negotiation this time began with considerations to ensure that all senior leaders of both the parties would not lose in the federal and provincial elections.

While Maoist Center expressed worry about making its dignified presence in both the elections, UML had fears that some ‘foreign forces’ could put the party outside the government even if it stood as the largest party after the elections.

“A section of leaders within the Maoist Center were also opposed to India’s high-handedness in various issues in NC-led government. This eventually created an environment to forge electoral alliance and eventually unite the two major leftist parties in the country,” a senior leader said, while asking for anonymity.

Role of external actor?
Although there are rumors making the rounds that external actors, particularly northern neighbor, had a role in facilitating the forging of leftist alliance, chairs of both UML and Maoist Center brushed aside such suggestions in implicit manner. Speaking at a function organized to announce the unification agreement, the two leaders even assured that the alliance was not aimed against any of the neighbors, apparently to allay the concerns of New Delhi.

Similarly, UML Chair Oli said that their alliance was not directed against anyone, apparently hinting at possible discomfort of New Delhi. “This is in favor of Nepal. This is the aspiration of the Nepali people. This is the desire of the Nepali people,” he said, while adding that the alliance between the UML and Maoist Center would drive the country toward political stability and economic prosperity.
Oli said that they want to maintain balanced and friendly relations with neighboring countries based on mutual equality and in the capacity of sovereign countries.

“We will maintain foreign relations based on the principles enshrined in the UN Charter, non-aligned movement, and five principles of peaceful co-existence,” he said.

What will happen to the government?
Although UML Chairman Oli said during the function that their priority for now is not the government, there are discussions within the UML and Maoist Center to form a new government.

As the current parliament expires on October 21, a section of UML and Maoist Center leaders are concerned about the likelihood of Prime Minister Deuba’s possible move to defer the elections scheduled for November 26 and December 7.

Both provincial and federal elections must be held before the constitutional deadlines of January 21, 2018 to bring the new constitution into implementation. Some leaders of UML and Maoist Center have maintained that the NC may not go to that extent to derail the ongoing peace process by deferring the polls.

The Maoist Center is a key coalition partner of the NC.

Leftist alliance will not be allowed to waver: Alliance top leaders

KATHMANDU, Dec 30: The chairpersons of the two main parties in the leftist alliance have asserted that although there might... Read More...

Prime Minister and Nepali Congress President Sher Bahadur Deuba have claimed that the leftist alliance has been formed as an... Read More...