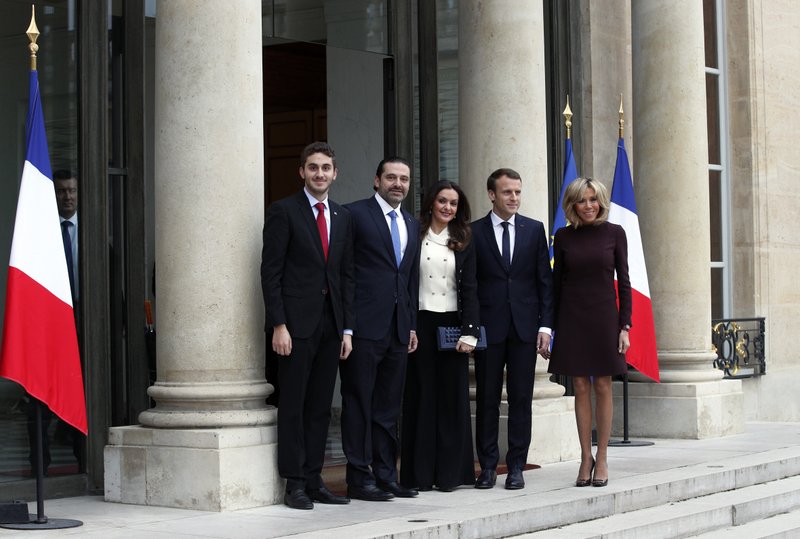 PARIS, Nov 19:  Lebanon’s Prime Minister Saad Hariri said he will return home in the coming days from where he will declare a political stance for the first time since making a strange resignation announcement from Saudi Arabia that unleashed fears of a crisis in Lebanon.

Hariri and his family met Saturday with French President Emmanuel Macron, who invited the Lebanese leader to Paris to dispel fears that he was being held in Saudi Arabia against his will. Macron is seeking to calm tensions and avert a proxy conflict between Saudi-backed and Iranian-backed camps in Lebanon.

Hariri’s appearance in Paris — looking relaxed and posing with his wife and older son on the steps of the Elysee Palace with the French presidential couple in front of a large crowd of journalists — contrasted with his limited-access, carefully choreographed appearances from Saudi Arabia.

Hariri told Lebanese President Michel Aoun on Saturday that he will take part in Independence Day celebrations in Beirut on Wednesday, according to Macron’s office.

After his meeting with Macron, Hariri told reporters: “God willing, I will attend Independence Day in Lebanon and will declare my political stance from Lebanon and after meeting President Michel Aoun.”

“As you know I have resigned and we will talk about this matter in Lebanon,” Hariri said after thanking Macron, who he added, “expressed pure friendship toward me that I will never forget.”

The Independence Day ceremony is usually headed by the president, prime minister and parliament speaker, and Hariri’s presence could help calm uncertainties that have escalated since his strange and surprising resignation announcement on Nov. 4 from Saudi Arabia.

However, Hariri’s political status is murky. Lebanon’s president refused to accept Hariri’s resignation, accusing the Saudis of holding him against his will.

A high official in Macron’s office said Hariri’s place is first in Beirut, “which is the only place where he can hand his resignation to the Lebanese head of state.”

The official, who spoke on condition of anonymity in accordance with French presidential policy, found it normal that Hariri would keep any announcement about his political stance for his fellow citizens.

Before leaving Riyadh, Hariri dismissed as “rumors” reports about his alleged detention in the kingdom.

In his Nov. 4 televised resignation announcement, Hariri had cited Iran and Hezbollah for meddling in Arab countries, particularly Saudi Arabia. He also said he was afraid for his life.

President Donald Trump on Saturday spoke with Macron about the situation in Lebanon and Syria, and both leaders agreed on the need to work with allies to counter Hezbollah and Iran’s “destabilizing activities in the region,” the White House said.

Saudi Arabia on Saturday asked its citizens for the second time in less than two weeks to leave Lebanon “as soon as possible” given the “circumstances” there. That raised fears of more punitive actions to come.

The French presidential official said it is essential that Lebanon be protected from “negative” foreign influences because the country needs stability and a strong state. The official didn’t name any specific nations but said Lebanon should be protected from the “dangers that regional crises can pose to it.”

The Arab League is due to hold a meeting on Sunday in Cairo at Saudi Arabia’s urging where the Lebanon crisis and Iran’s role in the region are expected to be discussed.

Just before leaving Saudi Arabia, Hariri met with the Saudi Crown Prince and other senior officials, according to a member of Hariri’s political party and two Lebanese television stations.

Hariri landed before dawn Saturday at an airport used for private jets in Le Bourget north of Paris, and came in a convoy to his Paris residence in a high-end neighborhood, where police stood guard. Hariri frequently stays in France thanks to decades-old family ties here.

Hariri held private talks with Macron and then they were joined by Hariri’s wife Lara al-Azm and elder son Hussam and Macron’s wife Brigitte for lunch.

Hariri’s two younger son and daughter, Abdul-Aziz and Loulwa, remained in Saudi Arabia because they have school on Sunday, said Okab Saqr, a member of Hariri’s parliamentary bloc.

The official with the French presidency said France is not worried that Hariri left two of his children in Saudi Arabia.

“We have no reason to be concerned about this,” the French official said, answering questions about whether, as some have suggested, Saudi Arabia could use the children’s whereabouts to maintain pressure on Hariri.

Hariri’s exact next steps after his planned visit to Lebanon are unclear. A French official said Saturday that France is offering Hariri the necessary support during this time of political turmoil in his country. The official was not authorized to be publicly named.

Macron said he received Hariri “with the honors due a prime minister,” even though he has announced his resignation, since Lebanon hasn’t yet recognized it.

While Macron insists that he’s not offering “exile,” Hariri’s return could be complicated by Lebanon’s internal tensions.

During a phone call on Saturday morning, Macron and Aoun spoke about a return of Hariri to Lebanon that could help make Lebanese institutions “function normally again,” the French presidential official said.

It’s part of a broader Macron strategy to reassert French influence in the region, while the United States under President Donald Trump is increasingly seen as unpredictable or disengaged. Macron’s office says France’s strategy is to talk to all powers in the region and not to appear as choosing a camp.

Anjan is making Nepal visible in Israel
17 hours ago

FDI pledges from China in Nepal's tourism sector amounts Rs 5.35 billion in the first two months of the current fiscal year
6 hours ago

Anjan is making Nepal visible in Israel
17 hours ago