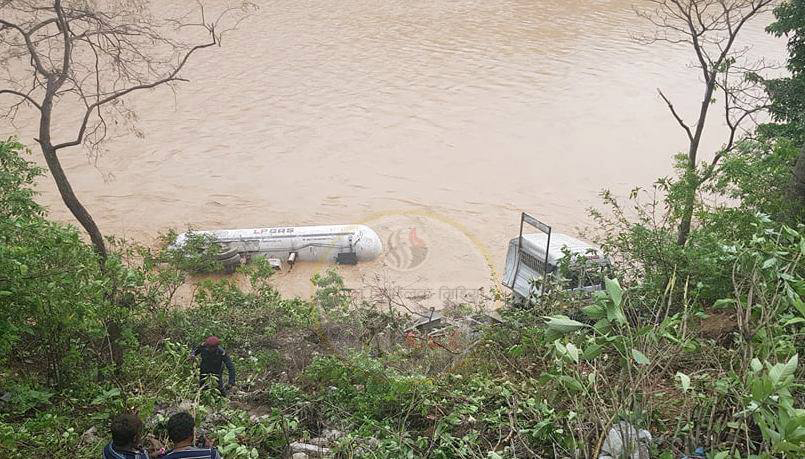 Even a week after the incident, the authorities concerned has not made any efforts to pull the tanker out of the river. Increasing level of water in the river has further pushed the tanker into the river which has eventually resulted in the leakage, according to Ramesh Silwal of Malekhu. "As the gas has started leaking, it has increased the fear of other environmental hazards," said Silwal.

As informed by Area Police Office (APO), Gajuri, the tanker belongs to Siddhartha Gas Industry. According to Police Inspector Sanjay Timalsina, the heavy flow of water in the river has resulted in the leakage. "We have time and again urged the company to pull the gas bullet out of the river but still the officials have paid no attention," said Timalsina.

The locals fear that the gas bullet can explode at any time and have decided to knock the door of the local administration for help. A fire engine of Nilkantha Municipality has been kept ready in the site for an emergency. The driver of the gas bullet Surendra Singh, 36, had died on the spot after the accident.

RAUTAHAT, Nov 30: Police have fired at least 50 rounds of bullet to take the situation under control in Rautahat... Read More...

Potent, climate warming gases are being emitted into the atmosphere but are not being recorded in official inventories – a... Read More...

In Pictures: Students take to the streets demanding justice for Sadiksha Chaudhary
16 minutes ago