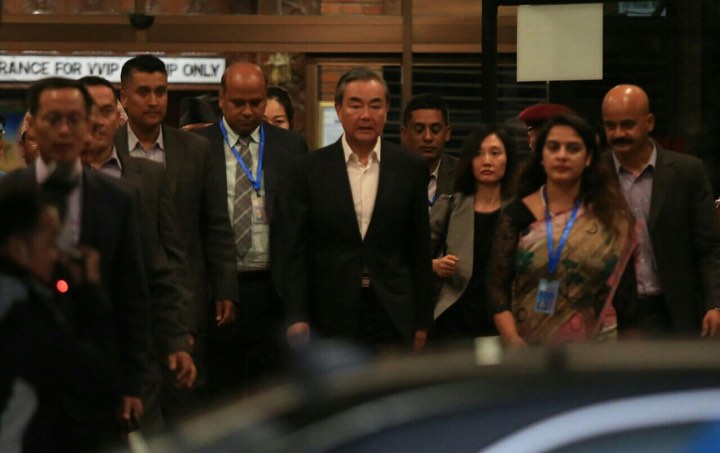 KATHMANDU, Sept 11: Chinese State Councilor and Foreign Minister Wang Yi wrapped up his three-day official visit to Nepal on Tuesday after holding consultations with the government and top leadership of major political parties about the anticipated visit of Chinese President Xi Jinping to Nepal next month.

Besides the upcoming visit of President Xi, the bilateral meetings dwelt on economic cooperation between the two countries including the projects under the Belt and Road Initiative (BRI), potential areas of investment in Nepal and strengthening bilateral relations in the changed political context, according to the aides of the top leaders.

Talking to media after holding a meeting with Minister Wang, NCP Chairman Pushpa Kamal Dahal said the visit of Chinese President Xi to Nepal was among the issue that figured during the meeting. Dahal had briefed Minister Wang that the Nepali side had made all necessary preparations to welcome President Xi as there had already been a gap of several years since a Chinese President last visited Nepal.

While recalling the visit of Chinese President Jiang Zemin to Kathmandu in 1996  when he was Prime Minister, NC President Deuba, according to Nidhi, had said that NC was eager to welcome the Chinese President to Nepal and further strengthen the friendly relations between the two countries.

Earlier, both President Bidya Devi Bhandari and Prime Minister KP Oli had briefed Wang that Nepal was keen to welcome President Xi as this was the most opportune time for such a high-level visit to Nepal. Nepal expects President Xi to visit Kathmandu during his five-day visit to India beginning October 11.

A senior leader of ruling NCP said although the bilateral meetings were also held to review the implementation status of the past agreements, the visit of Foreign Minister Wang is mainly aimed at assessing the situation - whether it is an appropriate time for President Xi to visit Nepal. “Although the date is yet to be worked out, I have an impression that the visit of President Xi is likely anytime soon in the future,” said the leader, preferring not to be named.

Minister Wang, who is the first senior Chinese political leader to visit Nepal after the formation of the Oli-led government in February 2018, arrived in Kathmandu on a three-day official visit to Nepal on Sunday.

DHARAN, Oct 17: It has already been more than a decade since the government started constructing the Koshi Highway connecting... Read More...

KATHMANDU, Oct 12: Flowers of various types have been used to decorate the Kathmandu streets in a gesture to welcome... Read More...