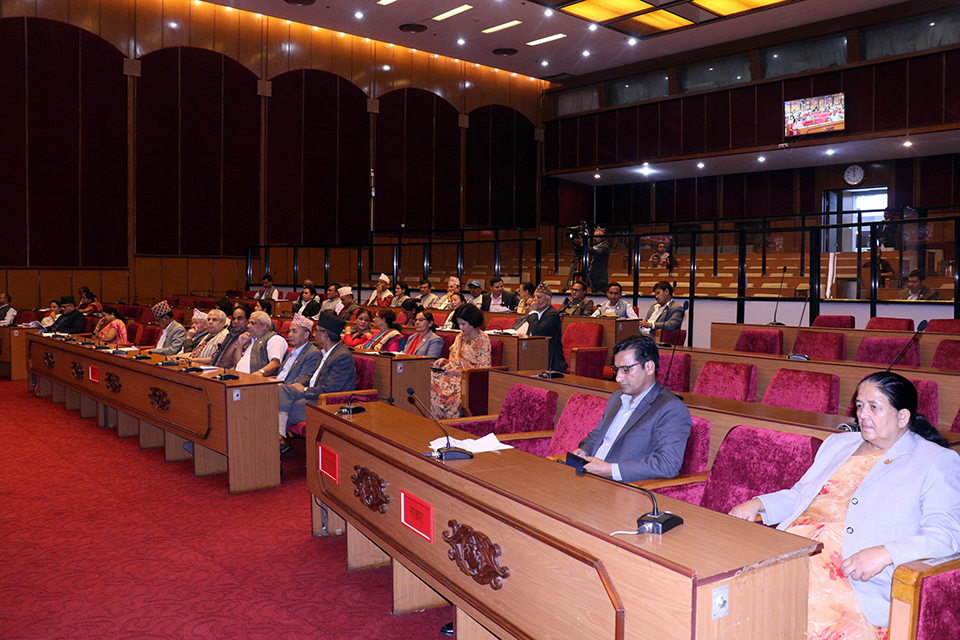 KATHMANDU, Aug 23: In a meeting of the National Assembly (NA) today, Upper House member Bhairabh Sundar Shrestha drew the attention of Home Minister Ram Bahadur Thapa towards initiating police investigation into the death of a student of the Korean language course at the Kirtipur-based Valley Institute.

Speaking in a special hour of the NA today, Shrestha said, "Police have not yet started an investigation into the death of Balkrishna Jaisi, son of Harisundar Jaisi of Surkhet district, despite the registration of First Information Report (FIR) by his family," he informed the House.

He reminded the House that Jaisi junior who had been alleged of his involvement in the missing of the son of Valley Institute owner was arrested by the police, but was released on August 12 as police could not find any evidence against him during the 24-hour investigation. He was freed as innocent, but he suddenly died within the three days of his release.

Badri Prasad Pandey drew the government's attention towards a risk of consequences facing the people of an entire settlement at Gauri Gaun in Bajura due to continuous soil erosion caused by a flooded river beneath the settlement. "The people have become homeless. Two people have already died and the Accham and Bajura districts may come under a threat of disaster if the Budhiganga River gets blocked by the landslide debris," he warned.

He was the view of taking timely preventive measures against the possible risk of disasters. He stressed the need of thinking on time to implement suggestions incorporated in a disaster-related study carried out during the premiership of the late Sushil Koirala. Khemraj Nepali expressed his concern over the Nepal Television's decision to remove the five-minute Maithili news service from its daily news bulletin.

"Maithili is not just a language, it reflects the civilization and culture of Nepal," he said, adding that it was one of the most spoken languages except Nepali in the country. "The decision is against the spirit of federalism. Maithili is not limited to one particular state, the opportunity to listen to it from the NTV central transmission line has been lost" he complained, seeking an effective role of State-owned media to protect and promote other languages including Maithili.

Ramprit Paswan expressed his grudges over the enrollment of non-Dalit students in the Dalit quota for the Council of Training Education and Vocational Training (CTEVET) scholarship program.

Kamala Kumari Oli sought a balanced tourism development from the east to west, putting the adventurous tourism, agriculture, rafting and religious and cultural tourism at the first while making preparations for the celebration of Visit Nepal Year-2020.

Lawmakers asks govt to provide compensation and relief to victims

KATHMANDU, Aug 6: Lawmakers have demanded the government to provide compensation and relief to the victims of natural disasters including... Read More...

KATHMANDU, Feb 18: In a meeting of the House of Representatives today, lawmakers put questions before Minister for Education, Science... Read More...