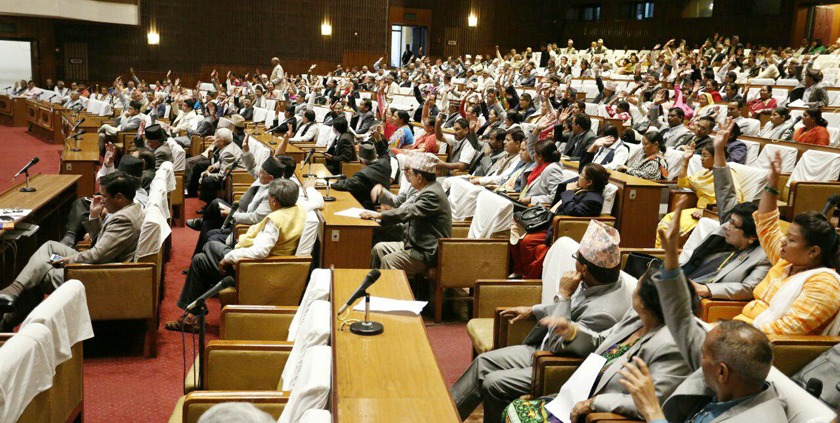 KATHMANDU, August 11: Parliament on Thursday endorsed a third bill related to the replacement of the Muluki Ain, introducing parole and open jail systems for the first time in the country, and paving the way for authorities to put inmates to public labor and social work.

After authentication from the president, the government can enact most of the provisions in the bill by publishing a notice in Nepal Gazette. Provisions related to allowing the inmates to serve their sentences in an open jail, doing social work, doing public labor, staying in rehabilitation centers or reform houses, serving the jail term only during night time or in the weekend will be enacted through the notice. Other provisions in the new law including a separate hearing in courts to pronounce sentence after determining the verdict and including others will be implemented only after a year.

With the enactment of the provision, the authorities concerned can deploy prisoners for various social activities and labor work if the prisoners so wish and are above 18 years.
The endorsed law has proposed deploying inmates above 18 years and sentenced for three years or more in jail and physically able in public labor. 'If a prisoner contributes labor for one day, it will be considered the equivalent of an additional one day served in jail,' reads the bill endorsed on Thursday.

The new law has included a provision allowing those serving jail terms to go on parole to engage in some work. A parole is a temporary or permanent release of inmates before the expiry of their sentences based on their behavioral report.

According to the new bill, any prisoner serving less than six months will be given two options - serve out the sentence in prison or do social work. However, the court will take into account various things including the type of offense, the age of the offender and other background facts before allowing them to choose from the two options, according to the new law.

However, if any offender doing social work in lieu of time in jail fails to accomplish the given task, the court can annul the parole and put him behind bars again. A parole board will be formed to oversee the activities of such offenders.

Likewise, the new law has a provision for sending someone given less than two months in jail to a rehabilitation center instead.

Those jailed for serious crimes including murder, rape, trafficking in arms and ammunition, human trafficking, corruption, abduction, robbery, organized crime, money laundering, torture, treason and crime against humanity will not get the option of serving their sentence outside the jail.

Offenders in drugs-related cases can be sent to rehabilitation centers. The new law also has a provision of allowing those involved in specified crimes to serve their term staying in the prison only during night time or on the weekends.

Any offender who has served two-thirds of a total jail term in prison and has shown good behavior will be allowed to serve the remaining term in open jail. 'The open jail system envisions an offender serving out a jail term working at a place assigned by the jail authorities,' reads the endorsed bill.

Likewise, an offender is given more than one year in jail and already serving two-thirds of the sentence can be appointed to the parole board at the recommendation of the district court. Any offender serving a life sentence or a sentence for grave crimes such as corruption, rape or human trafficking cannot be appointed to the parole board.
A new provision also proposes allowing any offender given more than a year in jail and showing good conduct to visit family and attend various cultural and social activities if they are in the last six months of their jail term.

The new bill also proposes a separate hearing in court to pronounce sentences after determining the crime on an accused. Currently, the same hearing determines both verdict and sentence. 'But separate hearings are not mandatory for cases on which offenders will get only three years of jail or Rs 30,000 fine,' reads a provision in the law.

KATHMANDU, May1: Minister for Labor and Employment Surya Man Gurung on Monday has said the legislature-parliament is set to pass Labor Act... Read More...