Lapse in border security in Panchathar 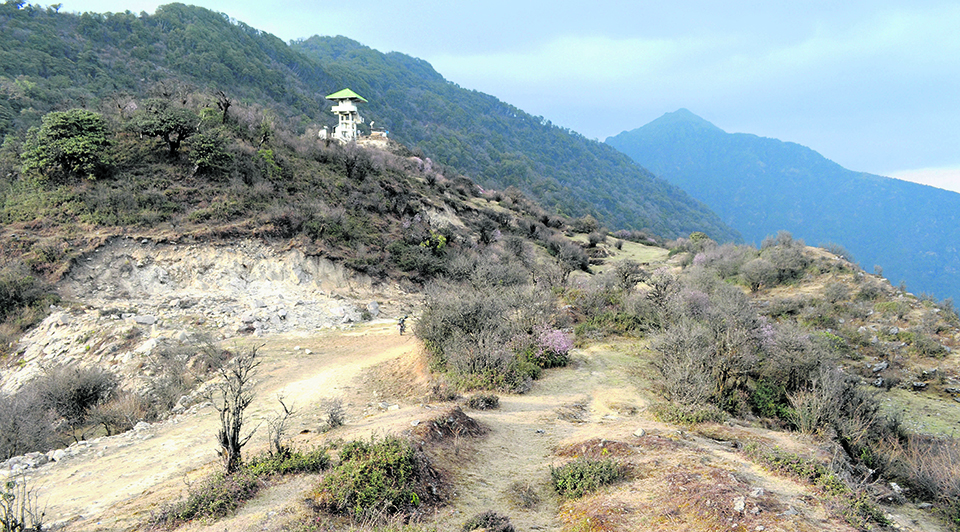 A border security watchtower on Indian side near the Nepal India border in Chiwabhanjyang, Panchathar in this recent picture.  Giriraj Banskota/Republica

PANCHTHAR, March 28: There were 49 pillars until recently at the Indo-Nepal border from Pokhari to Falot area of Panchthar district. After a detailed inspection, two teams of the District Police Office realized that eight of the pillars were missing. Their report states that there are only 41 pillars separating our border with India.

The area, which the teams inspected, is a mountainous area that is covered with thick snow. Because of the tough topography, commoners rarely travel in this area. Police Inspector Bigyan Basnet, the information officer, informed that  both of the teams had studied about the border and pillars for 10 days.

As part of the inspection, the teams scrutinized positions of the border pillars above pillar number 35. Of the remaining 41 pillars, some are fragile, the report says. Basnet states that detailed report of pillars from Falot to Ilam is yet to be prepared.

He expressed concerns over the lack of security on the bordering areas. In lack of sufficient security along the border, there has been rise in the smuggling of animal parts and herbs.

Smugglers have been using our border for smuggling animal parts and precious herbs to India and China. The government should take immediate actions to address this situation.  - Rajkumar Rai
Sikre village resident

Yangwarak and Falelung Rural Municipalities of the district border with Sikkim and West Bengal of India. On the borderlines in these municipalities, there is no presence of Nepali security forces. In lack of security forces, it has made it very easy for smugglers.

On the Nepal side, there is a police post in Chyanthapu market, which is around 24 kilometers away from the Indo-Nepal border. Even this police post, does not have its own vehicle to patrol the area. "Now we have a road in the area on which vehicles regularly ply. But we don't have a vehicle which we could use to patrol the area," said a police personal stationed at the post.  He added that the situation of border police is pathetic in lack of resources to secure the borders.

Requesting anonymity, he further reported that it is not easy to cross the Indian side of the border. It necessitates registration and submitting of photo and identity cards with the Sikkim Police Post. "However, on our side, it is very easy to get across without much restriction through the unguarded border," he said.

On the Indian side, Indian border security forces, Seema Suraksha Bal(SSB), camps are positioned at every six kilometers. They patrol the border regularly and anyone entering India are thoroughly investigated at the heavily guarded border posts.

"On our side, we don't have the Armed Police Force camps to secure the borders," the police officer said. "Even though vehicular traffic and movement of people is getting denser every year, our government so far has not taken the matter with due seriousness. We must establish security camps here," he added.

Chief District Officer, Prakash Chandra Adhikari, admits the sorry security condition along the border, which he claims has led to the disappearing of border pillars and smuggling of herbs and animals. He stressed on the need to establish custom office in the district.

"We need to have custom offices on every point of entry into the country in this district as well. Along with that security forces, basically armed police forces, should be stationed on the border to protect our borders," he said further adding that he will take initiatives toward it.

"We are very much aware of the lack of security on the border and we are going to address it," Adhikari stated. "The topographical challenge is very tough. But this cannot be an excuse," he added.

Rajkumar Rai, a local of Sikre village accused authorities concerned of not heeding to their demands of establishing security camps on the border. Despite consistent effort of the locals, they have not been able to protect their own land, wildlife and jungle, he lamented. "We don't get to see the face of Nepali security force here whereas you go on the other side you will find the Indian border security forces everywhere. Lack of security forces means that smugglers can smuggle things out from here at their will, without any restrictions," he said.
Locals state that smuggling of herbs and animals in the area has been going on unchecked for a longtime. "Smugglers have been using our border for smuggling animal parts and precious herbs to India and China. The government should take immediate actions to address this situation," Rai stated.

Trump willing to shut down government over border security

BIRGUNJ, Oct 14: India has ramped up security at the no-man's land and the transit points along the Nepal-India border... Read More...