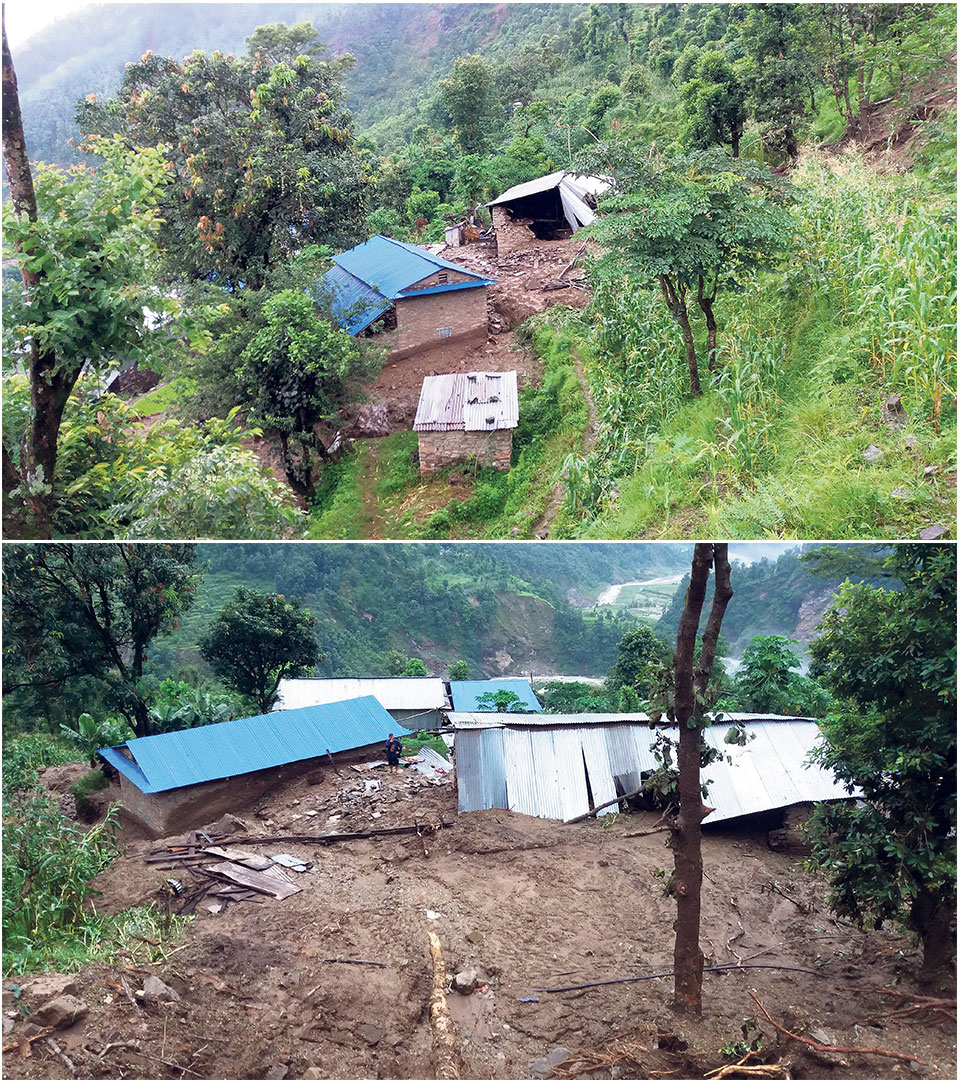 DHADING, June 30: “Help, help …. I want to live; I don’t want to die, save me.” Just when he had fallen asleep, Dil Bahadur Gurung awoke to these words. Rain was still falling heavily and the words were not very audible. Rain had started falling in the village since early evening and kept falling insistently when Gurung went to bed around 10 pm.

“The rain was pouring heavily when we went to bed in. The torrential rainfall had made all of us quite nervous. We had reckoned something terrible was ahead, yet we went to sleep,” said Gurung. “When I heard the call for help, I rushed out my umbrella in hand. I had little idea what was happening,” he narrated.

When Gurung came out, he found that his house was already in grip of landslide. It was falling off. He saw people rushing here and there to save themselves. Rain was still pouring heavily. Gurung said that though heavy rainfalls during monsoon were expected, rainfall on Wednesday remained insistent for a long period. Gurung realized at once that landslides have already wreaked havoc in his village.

“All the villagers, including my family members, were in panic,” said Gurung. Bikash Gurung, his brother’s grandchild was trapped in house. Wind had blown off the roof of the house made of corrugated sheet. The boy was hurt and trapped inside the house. Gurung somehow rescued him and took him to a nearby health post later with help of other locals. But, he could not save three members of his family.

“We were not able to save two of my granddaughters and daughter-in-law. The landslide washed them away with the house,” he lamented.

The deadly landslides terrified the villagers so much that they spent the rest of the night on a nearby hill. When they returned home in the morning, entire village was destroyed. There was not even a single house in the village that was untouched.

“When we got back in the morning, we could not hold back our tears. All our houses were damaged. Some of the houses had totally vanished,” reported Gurung. “The landslides had uprooted electricity poles, trees and houses. The entire village was completely destroyed,” he added.

Saiswara village had faced similar landslides three years ago where in dozens of families were displaced at the time. Though the village was not deemed safe for settlement, the villagers later on returned, as they couldn’t abandon their ancestral land. “Three years ago our village was destroyed by similar landslide. Though the land was full of crack, we resettled back in the village because this is the place where our ancestors lived,” Gurung said adding, “abandoning the village is not possible. But we don’t have a choice.”

Following the landslide, villagers have urged the government to relocate them elsewhere. According to Gurung, they want to move out to safer place.

“This area is very prone to landslides and as such we are not safe here. We have realized it,” he said. “We urge the government to find some safe place for us to relocate,” he added.

Locals are mourning the death of the three villagers along with the destruction of the village. “It is very hard to come to terms with the destruction around. Wherever you look, you will see only landslides. Not even a single house in the whole village is good condition,” she remarked.

“We have not been able to forget that disaster, now this one has wounded us more,” she said.

Jharlang, Darkha, Satyadevi, Lapa, Sertung and Tipling are some other villages, which are considered extremely prone to landslides. Despite the assessment, human settlements continue to grow in these villages.

According to Gurung, the government should promote integrated living, find safer place for all the people who are at the risk of landslides or floods. “It is the duty of the government to safeguard the life of its citizens. We cannot do it on our own,” he said.

On Wednesday, landslides had claimed life of two other people in the district. Two of these victims were from the same family of Chiuribot. Local administration has provided relief to the victims and has announced to hand over Rs 100,000 to the families of the deceased.

PHALEBAS (Parbat), July 26: Four families have been displaced by monsoon-triggered landslides at Majhaphant VDC of northern Parbat while 27... Read More...

IN PICS: Youths seek justice for 12-year-old girl killed after rape
19 hours ago

Trump says U.S. election winner might not be known for months
15 hours ago

IN PICS: Youths seek justice for 12-year-old girl killed after rape
19 hours ago