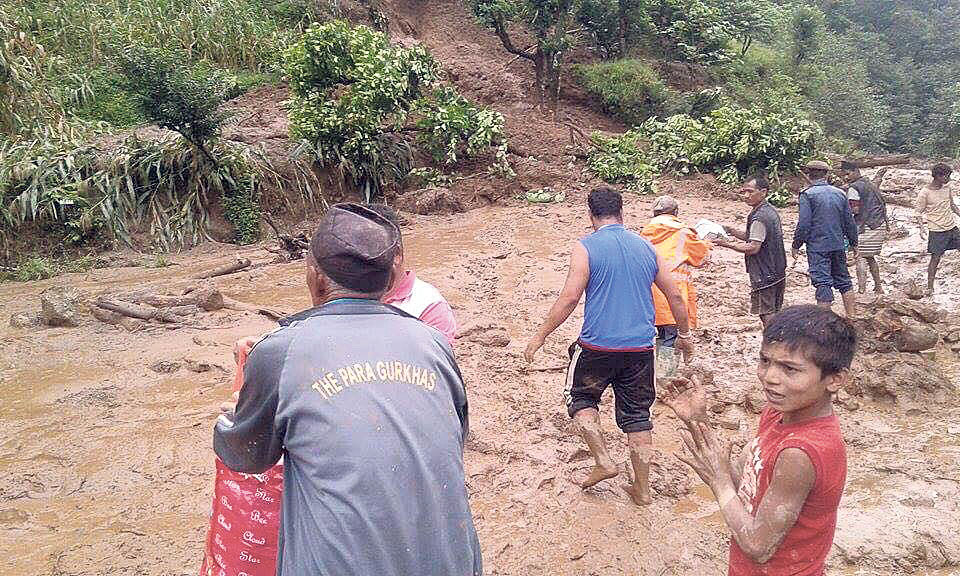 “There is high risk of landslides especially in one place of Huldi and we have informed about it not just to the local authorities but to the government as well,” ward chief Malla said, adding,”Lack of proper initiatives for risk mitigation and control have displaced the whole village.”

He stressed on the need to conduct international level programs to control landslides. “Landslides have been a common problem here since more than 40-50 years. So, these local programs are not going to help control them,” he said.

International programs of large budget can help the victims, according to Malla.  As the massive landslide of August 4 displaced the whole village, Malla sees no other alternative for the victims rather than relocating them to a safer zone. “How long will they live their life fearing about landslides? This settlement needs to be relocated,” he expressed.

Around 80 families, which were displaced by the landslide of August 4, are still not able to return back to their homes.

As per the locals, it is not possible for them to return back to their homes until monsoon is over. Pawan Sinjali Magar, a landslide victim, says, “Two sacks of rice and little amount of money cannot provide us respite. It’s better if the government brings log-term solutions to our problems.”

Sinjali has been sheltering at a local school while many escaped to the nearby hillocks to avoid landslides. Those who have been sheltering in hillocks visit home during day time and see their crops and return back to their shelters in the evening. This might continue for few more days.

Schools of these villages were shut down for ten days as to avoid landslide. However, the classes resumed from Thursday. “But no student has attended the class as of now since most of them are in highlands and some are sheltering in other villages,” Sinjali informed.

After the deadly landslide, people now get scared to death even by small landslides. In such condition, no one has dared to get back to their homes.

Balindra Malla, a teacher at Rasananda Primary School, said it has been hard for them to conduct school without students. “There is no student in the school and we cannot take action against them for it as we know what they are going through,” said Balindra. This is a serious problem, he added.

Though landslides have not completely damaged the households, it has still been a great threat to the security of the locals. Locals come to their houses for having food and to rest but they have no guts to spend the nights there. Around 115 families of Huldi and Lebang Harpe of ward no 1, Kandakhani, Bahungaun and Kalnechaur of ward 2 have been completely or partially affected by landslides.

Shambu Jha, officiating chief of the Land Conservation Office (LCO), Baglung informed that the District Disaster Relief Committee (DDRC) had decided to mitigate the risk of the huge landslide of Huldi. “Landslides have been continuously troubling the locals of that place. So, we had deployed a technical team to study about the place,” Jha said, adding, “Unless the government doesn’t mobilize a team of experts to study and control landslides, there are no other possibilities of controlling them.”

Landslide at Huldi is among one of the largest in the country. There has not been a single year when the locals of Huldi did not have to run for their lives due to landslides.

“Every year, small budget programs are conducted but such programs have not been effective even to control minor landslides,” said Sher Bahadur Shrestha, chief of LCO, adding, “From now onward, such programs will be conducted by the local units and we are ready to assist them with any technical help required.”

According to the police, there have been no human casualties due to flood but seven households were inundated compelling the family members to live a displaced life. With the level of water receding, life in Khadu village is returning back to normalcy. As told by police officers, three houses and a pick-up jeep of Dil Bahadur Karki, a local, were submerged by flood. With the co-ordination of the police and the locals, necessary materials have been taken out of the inundated houses.

Locals of these villages are waiting for the time when they won’t have to catch their breath seeing dark clouds hovering in the sky.