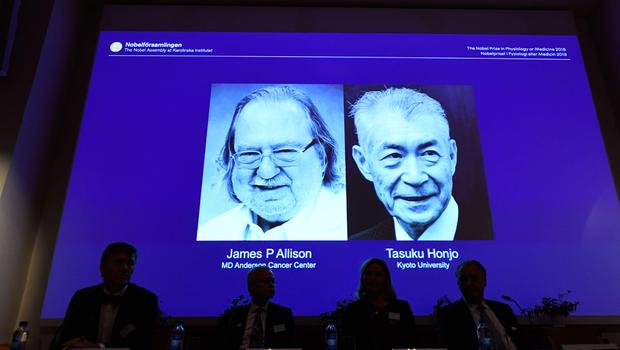 STOCKHOLM, Oct 1: Two scientists who discovered how to fight cancer using the body's immune system have won the 2018 Nobel Prize for physiology or medicine.

The work by James P Allison, from the US, and Tasuku Honjo, from Japan, has led to treatments for advanced, deadly skin cancer.

Experts say it has proved to be "strikingly effective".

The immune system normally seeks out and destroys mutated cells, but cancer cells find sophisticated ways to hide from immune attacks, allowing them to thrive and grow. Many types of cancer do this by ramping up a braking mechanism that keeps immune cells in check.

The discovery is transforming cancer treatments and has led to a new class of drugs that work by switching off the braking mechanism, prompting the immune cells to attack cancer cells. The drugs have significant side effects, but have been shown to be effective – including, in some cases, against late-stage cancers that were previously untreatable.

"Allison and Honjo showed how different strategies for inhibiting the brakes on the immune system can be used in the treatment of cancer," the Assembly said in a statement.

Last year's prize went to three Americans for work in identifying genes and proteins that work in the body's biological clock, which affects functions such as sleep patterns, blood pressure and eating habits.

Can kids be harmed wearing masks to protect against COVID?
10 minutes ago