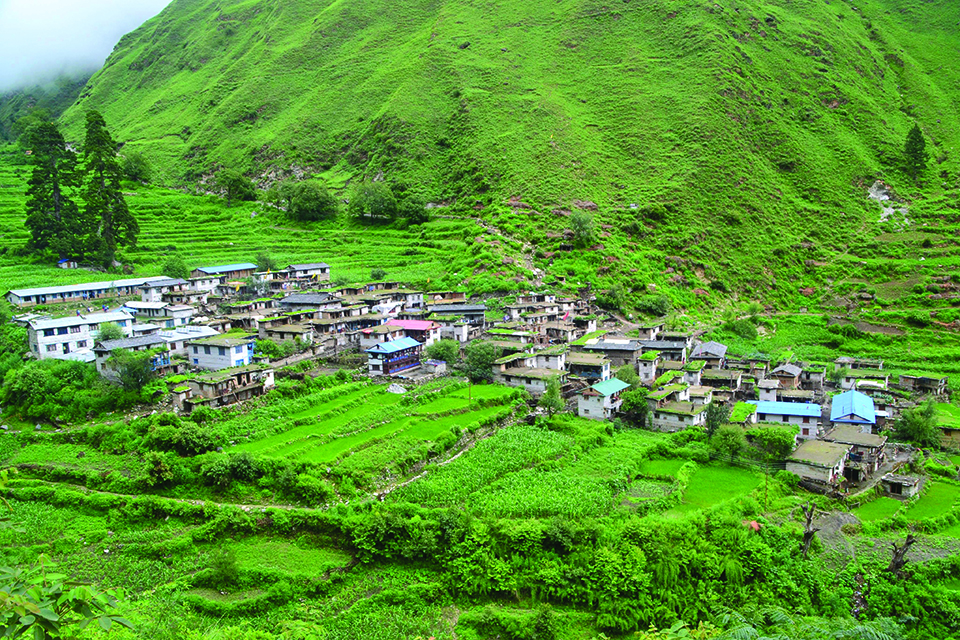 Bishnu Prasad Devkota /Republica A view of the Fulching village in Tripurasundari Municipality -5, Dolpa in this recent picture.

DOLPA, Jan 15: Chandra Lal Chalaune, 69, feels deeply connected to Fulching village. This is where he was born and raised. During childhood, he always thought that the land where he played and the fields where he worked belong to his family. As days passed, it dawned to him that his family didn't own any of the lands. "We were landless people. When I grew, I realized that none of the land plots we cultivated or lived on was registered in our name," Chalaune reports.

Since the land on which his family worked hard actually belonged to landlords, his family shared the crop yield with the landlords. The landlords used to take a much bigger percentage of the production.

In 1996, government officials came to village for land survey. At the time, these officials registered our land in other people's name, leaving us officially landless. They are not the residents of this village, how could they own land here. --Hiukali Chalaune, Fulching village resident

"Not all landlords live here, we work in their fields and they take away the crops when harvested," said Chalaune.

It is not just Chalune's story. There are dozens of families in the village who have no claim over the land that they have been cultivating for many generations now. They not only own the farm fields that they cultivate, but also the land on which their houses are built are not officially theirs.

"These farms are very fertile and we do produce enough crops and vegetables on them. Yet, most of the people from our community find it challenging to meet our ends," said Chalaune. "It would be better if we had our own land."

Landlords take 60 percent of their annual production. And the rest 40 percent does not suffice to feed them for the year, the locals lament. There are 65 households around Fulching village. While none of the households have land ownership certificate, 23 don't have even a have a land plot to erect a cottage.

According to Chalaune, all those people were born and brought up in the very village. "None of the households here arrived here from other places. We have been here for many generations now. Yet, many of the families do not have land of their own to cultivate or to build a house on," he elaborated.

Hiukali Chalaune, a middle-aged woman from the village urged the government to 'return' them their 'ancestral' land. Even though there was no certificate with the ancestors, it belonged to them, she insisted.

In 1996, most of the land plots of Fulching village was registered in the names of the people from other villages, they claim adding that government records show that most of the lands were registered in the name of some locals of Liku VDC. Of these locals, Moti Prasad Pahadi, Ratna Prasad Pahadi, Narayan Giri and Rabilal Khatri own majority of the land of this village. Locals have expressed an utter dissatisfaction over it.

"In 1996, government officials were in the village for land survey. At the time, these officials registered our land in other people's name, leaving us officially landless. They are not the residents of this village, how could they own land here," fumed Hiukali. "Because we don't have land of our own, we remain poor and we do not have enough food to sustain our family for the year, no matter how much we work in fields."

Meanwhile, an elderly person from Fulching village Lok Bahadur said that the government should initiate the process to hold dialogues with the registered landowners and settle the issue.

"The owners do not stay here. They only have the lands in their name. But we claim that this is our ancestral village. So, we demand that the government intervene and settle the issue," he said.

He alleged that there was some foul play during the 1996 land survey whereby some influential people in the region used their political influences and registered all the poor villager's land in their own name. "Since it was stolen from us through foul play by influential people at the time, the land must be returned to us now. It is not just for the government to ignore such injustice."

"We want justice. We want an official probe in the case. It should be investigated how they became the owner of the lands here in our village and the findings should be made public," said Lok Bahadur, who is also known as an active social worker in the village.

"We want the government, both the local and the federal to investigate this issue seriously as it is related to the life of so many families." If the government pays no heed to their demands, locals have warned of protest in near future.

"We have talked even to some of the owners and they are ready to solve the problem. But speaking is one thing, doing is another thing. So, we want the authorities concerned to intervene and settle this issue," Lok Bahadur said.

"There are legal provisions that are in our favor. The only thing that is holding us from getting justice is the will of the government to deliver justice to us. We will fight for our rights," he said.