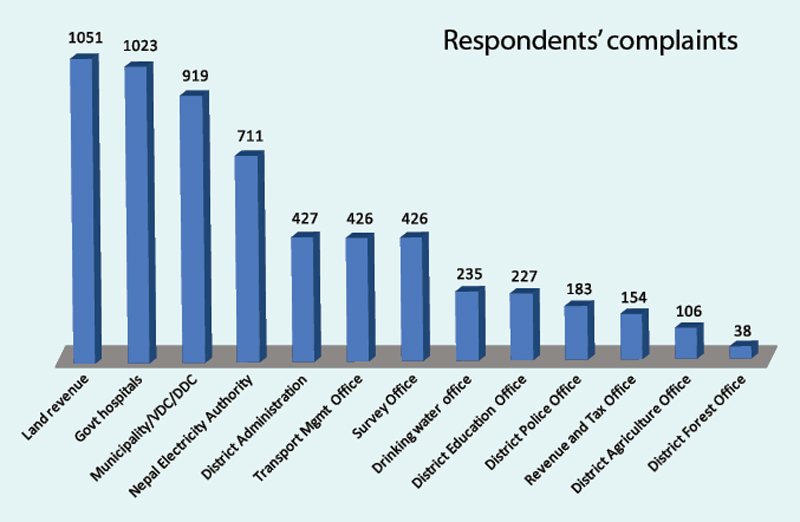 KATHMANDU, Dec 27: Service seekers in Nepal are compelled to pay the maximum amout of bribes at the land revenue offices to settle land-related matters, according to a recent study.

Other offices where people have to bribe officials  to get their work done in time and avoid the involvement of middlemen .are the offices related to transportation and health services and local bodies such as village development committees, municipalities, district development committees (DDCs) and the land survey offices.

The study conducted by Transparency International Nepal (TI-Nepal) showed that the Land Revenue Office, the Transport Management Office, local bodies and the survey offices are the most corruption-prone. The study (focused on education and local development)  is titled 'Public Service Delivery Survey-2016'.

The report released on Monday states that service seekers have to spend additional money as kickbacks for the government officials to get their work fast-tracked.

Bribes were also paid in the form of gifts but most service seekers were found paying bribes in cash to get their work done.

TI-Nepal conducted the survey covering 2,205 respondents in nine districts. Almost half the respondents (1,051) said they were compelled to pay bribes to get their work done at the land reform offices in those districts. Similarly, 1,023 respondents said they had to bribe officials while receiving health service facilities at local levels.

"Service seekers paid bribes to get their work fast-tracked. In their answers, some respondents said that they had to spend additional money even to get admitted to hospitals," states the report.

"Service seekers at various offices including Land Revenue Office were forced to pay bribes as their business was unnecessarily delayed," said Prakash Chandra Bhattarai, lead researcher for the study. "Many of them were unaware about the facilities being provided by the local authorities and where to register complaints over delay."

The government's chief secretary, Som Lal Subedi, admitted to lapses in service delivery. "We have not been able to provide better service delivery as we are passing through a protracted political transition," said Subedi.

The government officials are bearing a dual responsibility- political and administrative-as the political parties have continuously failed to conduct local polls since the tenure of the local bodies expired in 2002.

Dismayed with the existing service delivery at the nodal points of government, the study has suggested to political parties and civil servants to play a more effective role to satisfy the service seekers.

Bomb goes off in Land Revenue Office in Siraha

12 people, including four foreigners, trapped in Tumling of Namkha
51 minutes ago