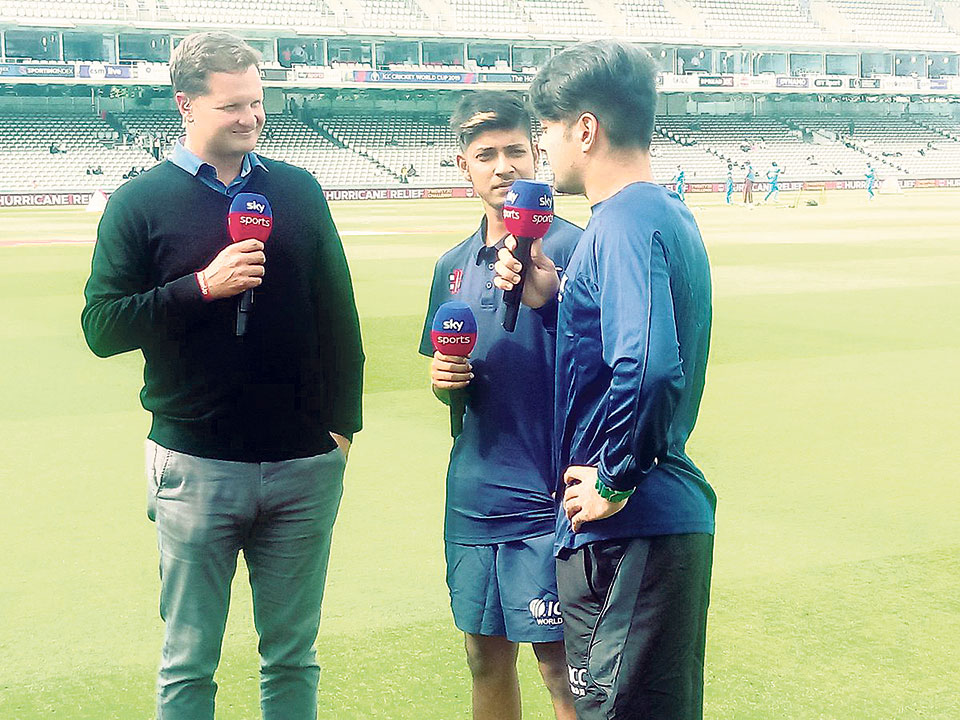 KATHMANDU, June 2: The teenage prodigy Sandeep Lamichhane made his official international debut representing World XI in a charity match against world T20 champions West Indies for Hurricane Relief T20 Challenge at the Lord’s Cricket Ground, London on Thursday. The 666th T20-International match will go down as the first status-based match first ever played by Lamichhane.

The 17-year-old is yet to play an international match for Nepal, so far being involved in List-A—ICC World Cricket League Championship, ICC Division 2 and ICC World Cup Qualifiers, and T20 matches for Delhi Daredevils.

The leg-spinner bowled only an over in the match conceding 12 runs and was last man standing on four runs facing five deliveries in the match that the World XI lost by 72 runs. West Indies won the toss and elected to bat first scoring 199 runs in their 20 overs. In reply, World XI was bundled out for 127 runs in the 17th over. Evin Lewis was adjudged man of the match for his 58 runs that came in a blistering pace at top of the innings.

Lamichhane bowled the 13th over of the inning. Marlon Samuels smashed him for a straight six over long-on in the 4th delivery of the over before collecting three runs in next delivery to take 12 runs from the over. The Nepal youngster was not called for another over in the day by skipper Shahid Afridi, who replaced Eoin Morgan as captain after the former was ruled out due to finger-injury.

“They are champions, and they played like champions,” Shahid Afridi, captain of the ICC World XI, declared after the ICC World T20 2016 champions sealed a 72-run win in the Hurricane Relief T20 Challenge.

A highlight of the match was Afridi, who was playing his last international. He drew Andre Fletcher out for a stumping and got his 98th T20I wicket in his 99th match. He then came out with a runner to make 11 runs later in the chase.

“I’m very lucky that Allah gave me this opportunity and I finish [my career] in the home of cricket,” he added “Thanks to Andy Flower and the [England and Wales Cricket Board] management.”

Similarly, Carlos Brathwaite, the West Indies captain said after the win, “Obviously the money would be used to get the stadium back up, electricity back on, infrastructure where it was. But on occasions like this, it’s just a relief to have good games and good cheer. Psychologically it’ll be a boost for people back home.”

Lamichhane will return home and travel Lord’s again in late June to contest in a T20 tournament with the national team against the Marylebone Cricket Club (MCC) and the Netherlands at the Lord’s. Nepal has both ODI and T20 international status and will play the tournament on July 29, the MCC announced.

Success continued to follow Lamichhane when he became the first Nepali player to be picked in the IPL 2018 when... Read More...

One killed, 14 injured in Dailekh bus accident
56 minutes ago

Who can get free COVID-19 treatments?
7 hours ago
NC demands free PCR test and treatment for COVID-19 patients
19 hours ago