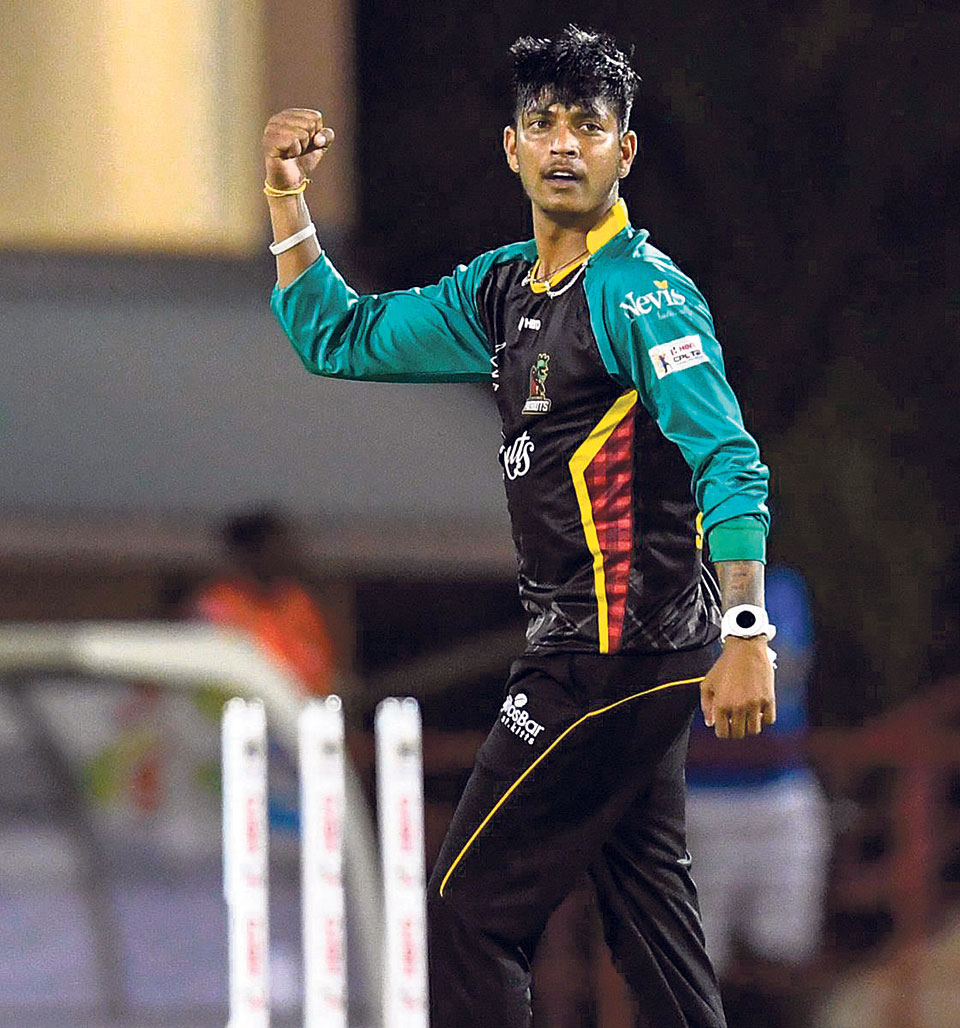 KATHMANDU, Aug 23: Sandeep Lamichhane produced another stellar performance for his side St Kitts and Nevis Patriots at the ongoing Caribbean Premier League (CPL) in a seven-wicket win against St Lucia Stars at Gros Islet on Wednesday. The 18-year-old picked up two wickets including Aussie cricket star David Warner to round off a two-over spell conceding 13 runs off it.

The leg-spinner from Nepal dismissed Stars’ opening batsman Warner for 14 runs, caught by Ben Cutting, in his another successful first over display. He then dismissed the Afghan spinner Qais Ahmed for 24 runs in 18-ball with two fours and two sixes to round-off another impressive display of leg-spin bowling.

Stars were bowled out for 69 runs in 12.3 overs with Patriots bowlers Sheldon Cottrell picking up three wickets, supported by Mahmudullah’s two and one each by Carlos Brathwaite and Ben Cutting.

In reply, Chris Gayle led Patriots completed the chase in 7.4 overs with opener Devon Thomas top-scoring with 38 runs including five fours and one six.

Upon completion of the second week of the Caribbean T20 extravaganza, Lamichhane remains on the top of the most economical bowlers’ list with minimum of five overs bowled in the league. He has conceded 4.84 runs per over in 13 overs he has delivered in the four matches so far. The list includes the established international spin-stars like Australian Adam Zampa, Pakistani Imad Wasim, South African Imran Tahir, West Indian Sunil Narine, among others.

Lamichhane’s team Patriots has climbed to the fourth position in the points table with two wins and two losses in four matches. Similarly, Stars is at the bottom of the table.

Lamichhane will play his match for Patriots against Barbados Tridents on August 25 before heading for Malaysia to join the national team to participate in the Asia Cup Qualifiers starting on August 29.

KATHMANDU, Aug 17: Sandeep Lamichhane presented another stand out bowling performance for his side St Kitts and Nevis Patriots in ongoing... Read More...

Two killed in bus-motorcycle head on collision
4 hours ago