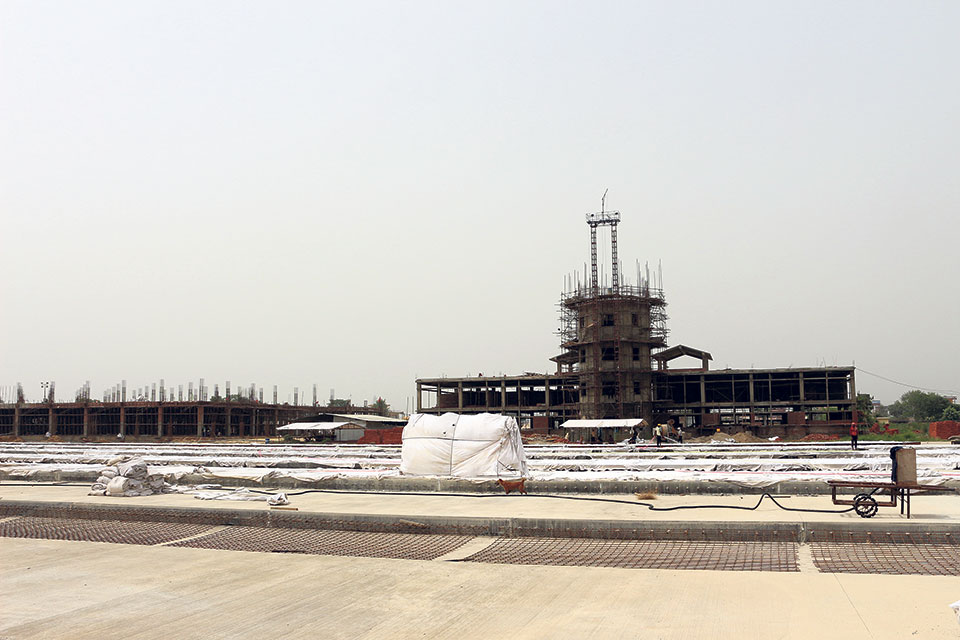 NEPALGUNJ, Sept 4: Professor Kenzo Tange, a Japanese architect, drew the Lumbini Master Plan and handed it over to Nepal government back in 1978. The government aimed to make infrastructure according to the plan within 1995. But hardly 70 percent progress has been achieved in the plan so far.

Negligence of the officials of Lumbini Development Trust and lack of budget are attributed for the lackluster progress.

Vice-chairman of the trust, Monk Metteyya, admitted that the work progress has been sluggish so far. “We need a fund of Rs 6 billion to complete the master plan, and we are preparing to hire a consultant for implementing the plan within a week,” said Metteyya, adding that the remaining tasks in the project will be awarded through a global tender thereafter. The new target to complete the remaining works will be three years from now, Metteyya said.

This is a textbook example of how works in most of the development projects go. Some of the other mega projects in Rupandehi district facing time overrun include Gautam Buddha International Airport, six-lane Butwal-Belhiya road, International Conference Center, and Belbas Bethari Namuna Road.

The deadline for the airport project, which is expected to be an alternative airport for the Tribhuvan International Airport, was the end of 2017. It was not complete then, and the new deadline was set for December 2019. The work is moving ahead at an extremely slow pace.

On the other hand, seven years have elapsed but the works of six-lane Butwal-Belhiya highway, which was initially planned to be brought into operation within three years, still remains incomplete.

Meanwhile, building the International Conference Center in Butwal was started in January 2015 with a target of completing the project by July 2017. But the works of the first phase, awarded to Rabina-Samanantar-Chandra Surya JV, have seen only 65 percent progress at the cost of Rs 230 million. Likewise, the work progress in Belbas Bethari Road, which was termed as a model road and was started in July 2016, is also dismal. The project cost is Rs 1.48 billion.

A project of electrification in Narainapur Village, which lies across the Rapti River in Banke, was started 20 years ago. It installed electricity poles in the village after some time, but the village is still in the dark. The villagers have been deprived of irrigation, communication, education and health facilities. Political leaders pledge to provide electricity supply during all election campaigns, but soon after elections they disappear, locals lamented. The electrification project was awarded to Usma-Guruom-Dhulikhel JV nine years ago.

Likewise, another project to provide electricity to six former Village Development Committees across the Rapti River, including Baijapur, Binauna and Fattepur, is also sick. The project was awarded to Usma-Gauri-Parbati JV in 2012. The delay in building a substation at Dhampur of Baijpur is also in a similar state.

“We see that the villages across the border are brightly lit during the night, but we are always left in the dark,” said Sunita Shahi, a resident of Narainapur, Banke. Shahi lamented for being the citizen of a poor country. “We are a poor country and there is massive negligence in all government projects,” she added.

The project of the second circuit of Butwal-Kohalpur 132 KVA transmission line also remains sick for years, which would pave the way for electrification in the villages of Banke. But the works in the main electricity line have been affected as the project saw a legal hurdle from Banke National Park and non-performance from the contractors.

Director of Community Electrification Department of Nepal Electricity Authority, Tirpeshwar Purbe, informed that the contract has been extended twice before mid-October.

Not only the contractors are to blame for lackluster performance in the projects, but the government policy and indifference of authorities are also responsible for the dire status of projects.

The government had announced to implement Integrated Check Post (ICP) at Jamunaha customs point in Nepalgunj ten years ago, but it still remains only in paper. The plan was set to build ICP at Jaisapur, in Nepalgunj-16. A land of 90 bigha acquired in 2009 for building the ICP has now been turned into a grazing land while a public building in the site is now in a dilapidated state.

Homanath Bhusal, an engineer at Nepalgunj Building Division Office, blamed the Indian government for not taking steps to build the project that was expected to not only modernize imports and exports but also help in increasing revenue collection.

Babai Irrigation Project, Postal Highway Project, a 43-km river embankment along the Karnali River as part of Karnali Master Plan, and river embankment projects of Babai Bhada and Aurahi Rivers are other big projects that are incomplete in the province. The works of Babai Irrigation Project, which was started 30 years ago, has only seen a progress of 55 percent so far. The project was designed to irrigate agricultural lands in Banke and Bardiya districts.

Likewise, Naumure Multi-Purpose Hydroelectricity Project of Pyuthan is often mentioned in the budgets and policy papers, but no effort has been taken yet to implement it. The project of 245 MW with reservoir plant was pitched for Indian investments during India visit of erstwhile Prime Minister Pushpa Kamal Dahal in 2008 and the Government of India had also assured of investment in the plant. The project’s preliminary report has recently been prepared but no further steps have been taken.

The article has been composed by PROVINCIAL BUREAU

KATHMANDU, May 27: The government has directed the Lumbini Development Trust (LDT) to complete construction works as stipulated in the... Read More...

KATHMANDU, June 2: The first phase of the construction of a conference hall which can accommodate up to 5,000 people,... Read More...

Six members of same family killed as landslides sweep away their house in Kalikot
2 hours ago
One person goes missing, four vehicles buried in landslide in Makawanpur
4 hours ago