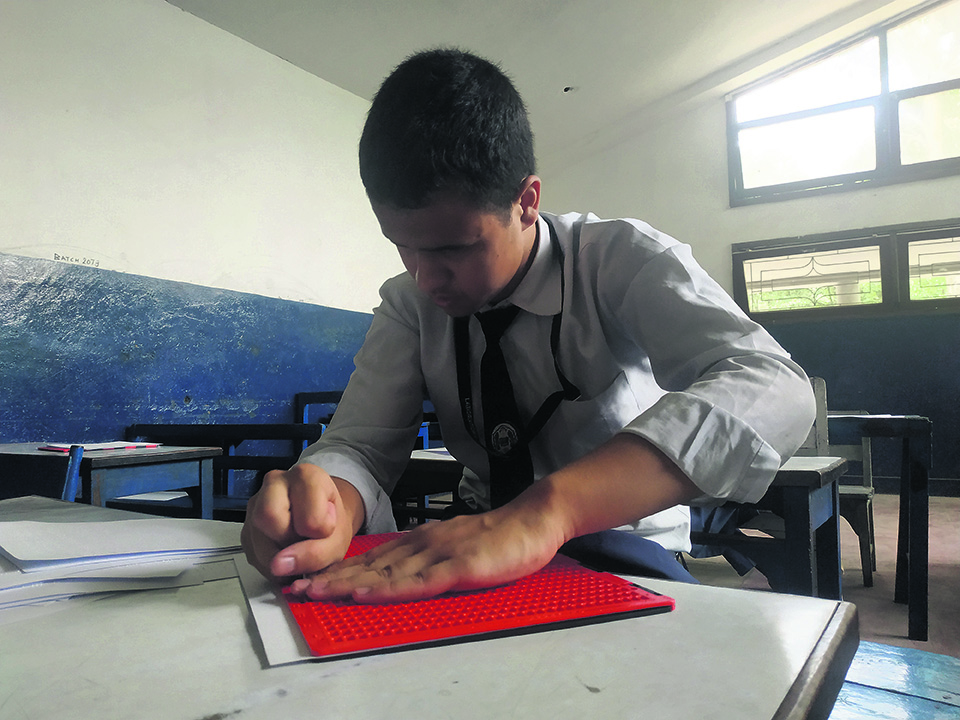 A visually-impaired student writing his exam with the help of a Braille slate and stylus at a school in Kathmandu on Friday. Sonam Lama/Republica

KATHMANDU, July 6: Although this year’s SEE results disappointed some community schools with their students securing low in GPA, there was a moment of glory for Balkalyan Secondary School as a visually impaired student at the school, Lokesh Dangi, topped the SEE in Rolpa. For a country still struggling with the adoption of Braille script, Dangi’s achievement has highlighted the zeal for education among the visually impaired.

He scored the highest among the 185 students in his class. “If only I had not messed up my Maths exam I could have scored A+. Since we don’t get to study graphs and figures in Braille, subjects like math and science are a problem,” he said.

Jaldeep Sapkota, 15, and his four visually-impaired classmates in Grade 10 at Laboratory Higher Secondary School, Kirtipur share a similar plight. “As graphs cannot be done in Braille, there should be some alternative subjects for the visually-impaired,” he said adding, “Although the classes have run for three months now, we don’t yet have an access to course books in Braille for certain Grade 10 subjects. Such things should be better monitored.”

Currently, there are 46 visually impaired students but only two transcribers in the school.

A real shortage of teachers and transcribers for the visually impaired is a huge challenge. Samita Shakya, a transcriber at Laboratory Higher Secondary, stressed the need for more transcribers.
“Although some training opportunities are said to be available, schools in remote areas face a lack of transcribers. This places a greater burden on the limited number available,” she said.

According to the Nepal Association for the Welfare of the Blind, out of 65-70 visually-impaired students who appeared for the SEE this year 21 scored a GPA above 3.6. NAWB provides Braille coursebooks free of cost to 82 community schools across Nepal. Students have to buy other materials including Braille-adopted slates and stylus, paper and geometry boxes.

A program officer at NAWB, Ratna Kaji Dangol, stressed that free access to such materials could enhance the level of education of the visually impaired. “As the schools have a high demand for reference books, we are planning to print around 28 reference books in Braille,” he said.

Visually-impaired Purna Devi Kansakar, who appeared in the SLC (now replaced by SEE) from the first batch at Laboratory in 1974, said “Students have better access to education now with schools organizing sport and music events.”

With advances in technology, the students are leaning to use gadgets. In the absence of Braille books Sapkota at Laboratory tries to gather information through computer and mobile phones. However, this is not possible for everyone. He spoke of the need for a more equitable approach.

KATHMANDU, July 4: Over 450,000 students cleared the Secondary Education Examinations this year. What bothers many of them no end... Read More...

LAHAN, March 29: The body of a boy who just took part in the Secondary Education Examination (SEE) was found... Read More...