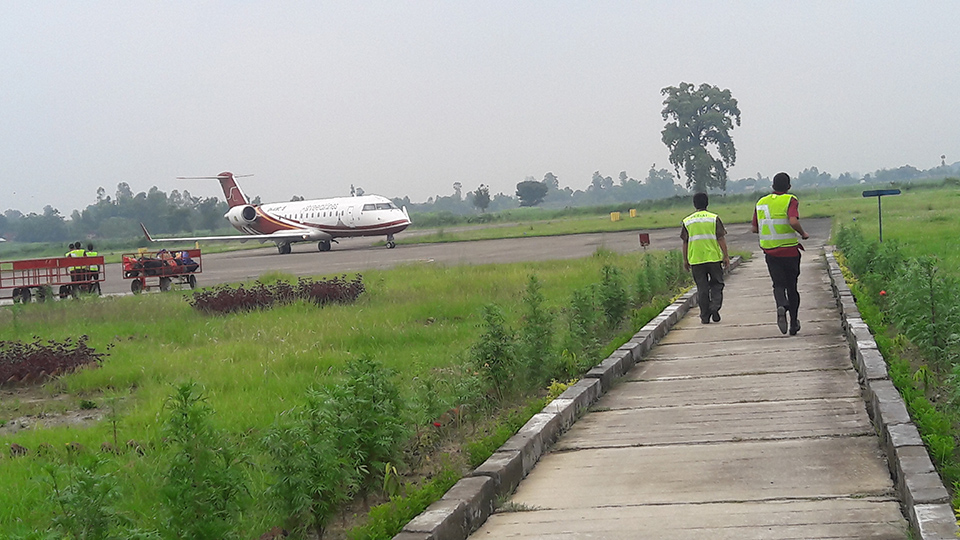 The airport, which has parking space for only two aircraft, realized the problem after airlines started increasing scheduled flights to the far-western commercial hub in recent months. Airline companies operate many as six scheduled flights a day to Dhangadhi airport. Until a month ago, it was seeing only three flights per day.

Though the office had acquired two bigaha and six kattha land to expand aircraft parking space, construction work has not begun due to lack of budget, Thakulla added. “Though we had demanded budget to expand parking space in the last fiscal year, our demand fell in a deaf ear,” he added.
An aircraft has to park in the aircraft for at least half an hour after landing at the airport. If three aircraft come to the airport at the same time, it will create big trouble, Thakulla said. “If that happens, we have no option but to allow passengers to get off the aircraft on the runway itself,” he added.
The airport sees similar situation during winter months when bad weather and foggy climate offers only a small window for take-off and landing.

At present, Buddha Air and Shree Airlines operate two flights a day each, while Saurya Airlines and Nepal Airlines Corporation operate a flight each during daytime.

According to technicians, an estimated Rs 40 million is needed to expand the parking space. “If the parking space is expanded as per the plan, we can easily park eight to night aircraft,” Thakulla added.

Dhangadhi Airport is spread over 53 bigaha of land. The runway of the airport was paved in 2005 in the initiation of local people. Locals have even made financial contribution to pave the runway.

DHANGADHI, May 26: The Dhangadhi Airport, the only airport in Sudurpaschim Province, has been closed for the last 21 days... Read More...

JUMLA, Feb 17: Potato farmers of Patarasi Rural Municipality in Jumla district are worried as their produce is not getting market... Read More...