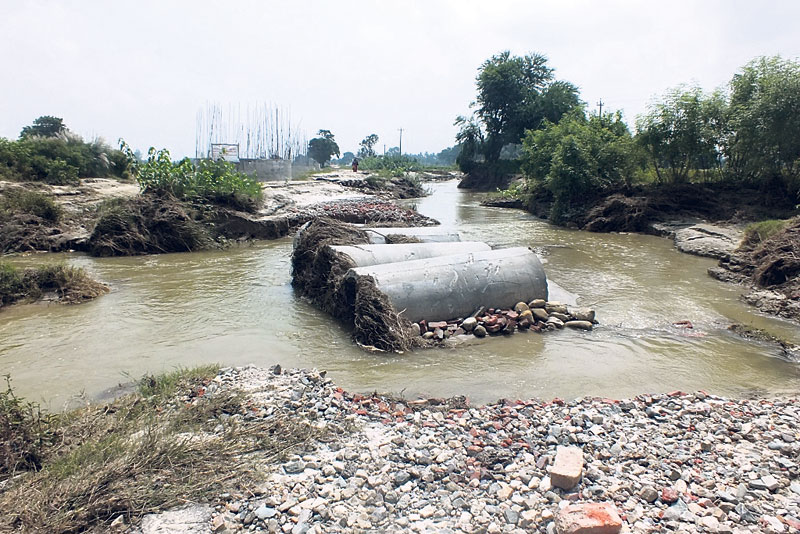 The Khando River on Saturday swept away the diversion road of the Rajbiraj-Kunauli road section in Saptari district. The contractor has built three bridge pillars and prepared a diversion route since the project started three years ago.

TILATHI, Saptari, July 18: Northern Chure region was all drenched due to the incessant rain throughout Saturday night. The heavy rainfall also triggered flood in Khado River badly affecting Tilathi - Rampura road section of the Rajbiraj - Kunauli highway. By Sunday morning, the road condition was so worst that no vehicle could pass through the road.

Rajbiraj - Kunauli is the major highway to connect to the southern part of Saptari. The main custom point of the district is also linked to the district headquarters by the same road.

This is not the first time that the monsoon rain brought vehicular movement to a complete halt in the highway. Transportation along this highway is affected for days every rainy season. Locals complain that they have to face hassles due to lack of a bridge. A bridge over the river, that was damaged and covered by flood residue, has not been replaced with a new one though a project was started three years ago.

“This is not the first time we are facing such inconvenience in the rainy season. We have facing it since five years. But the concerned authorities have not made any visible efforts to rebuild or to repair the bridge,” said Kripananda Jha of Tilathi - 1. “Residents in the northern part of the district are isolated from the southern part for around three months during the rainy season. Even a small flood in the Khado River obstructs vehicular movement. With no other alternatives to get across, we are cut off,” he added.

Without Rajbiraj - Kunauli roadway, locals like Jha from northern part of the district are deprived of facilities and amenities including access to market. Kunauli market is the only market for those residing in the region, Jha said.

Anjanikumar Das of Tilathi - 9 termed the roadway as the lifeline of the people in the northern Saptari. “And our lifeline is goes offline during monsoon. In lack of bridge we cannot even buy most essential things like medicine and daily consumables. When flood hits, we are forced to risk our life to get to the other side. We have no option,” Das lamented.

Million dollar question for the people in Saptari is - when would the government complete the construction of the bridge over Khado river? From when would they get uninterrupted transportation service? Jha feels that answer to these questions remains an enigma and this has disappointed them.

Last month, when several VDCs including Tilathi, Sakrpura, Rampura and Malhaniya were inundated by flood, the then Minister for Irrigation Umesh Kumar Yadav had visited here.

On that occasion, the locals had only one question for him: When would the government complete the construction of the bridge? In response Yadav had assured them that he would do everything possible to push their demand of completing the construction of the bridge. “I will discuss the issue with concerned authorities as soon as I reach Kathmandu and put in every effort possible to connect these VDCs with the southern part,” Jha quoted minister Yadav as saying.

On the occasion, locals had complained about the negligence of the construction company which was given the contract to build the new bridge. Contractors, Pappu and Mrit Sanjivani, who were given the contract to build a new bridge near the old bridge, have shown little progress during these years. The only progress shown was the construction three pillars for the bridge and creation of a diversion road.

However much of these has been washed away by the floods last month. Seeing lack of progress on completing the project, locals have taken to streets on many occasions to pressurize local authorities to expedite the project.

“Local authorities are not concerned about our problems. We have no connection to hospital, market, public offices when it rains. It puts life in such difficult situation. We are deprived of most basic needs,” said Jha. “We are forced to live in pathetic condition for around three to four months every year just because of local authorities’ apathy toward our demand for a bridge over the river.”

Karnali bridge starts to wear down due to lack of repair

TIKAPUR, August 29: The bridge connecting the far-western region to the rest of the country has started to wear down... Read More...

KATHMANDU: "Speed and effectiveness to guarantee quality are the prerequisites of service providers to make any city a smart city,"... Read More...

Pedestrians troubled due to lack of overhead bridge in Baneshwor

KATHMANDU, Sept 25: The pedestrians at New Baneshwor have been facing many problems as there aren't any overhead bridges available... Read More...