Lack of access to finance hindering growth of social entrepreneurship 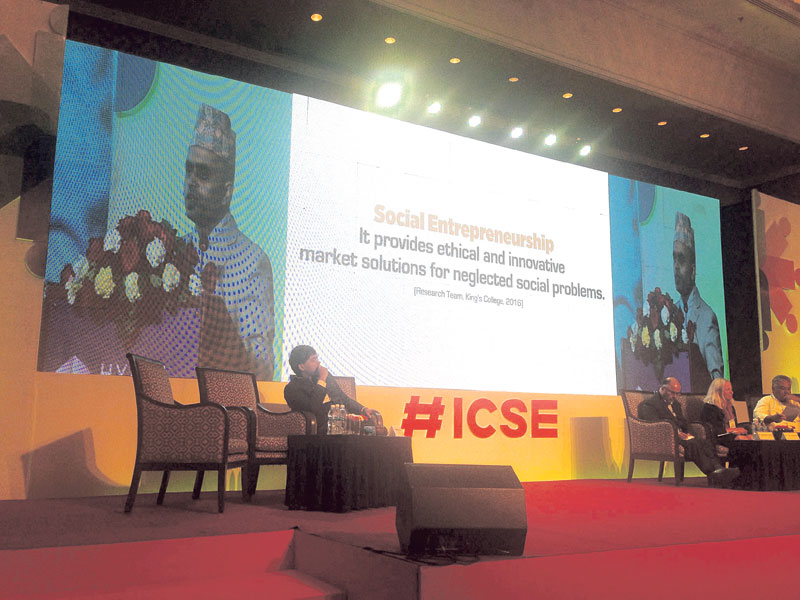 KATHMANDU, June 30: Lack of access to finance and acceptance are hindering the growth of social entrepreneurship in Nepal, according to the experts.

Addressing a session on 'Rebuilding Nepal through Social Entrepreneurship,' at a two-day international conference on social entrepreneurship in Kathmandu on Thursday, former finance secretary Rameshwor Khanal said that social entrepreneurs have been facing two challenges, one access to finance and the other lack of acceptance in general by the society and by the government in particular.

The conference organized by King's College, in partnership with more than 30 organizations including Dwaitto Foundation, Samriddhi Foundation, Behruva Ventures, Sherpa Adventure Gear, Siddhartha Inc, and many more -- many of which are social enterprises themselves -- saw participation of more than 400 delegates and social entrepreneurs.

Presenting the keynote address at the inaugural session, Prof Jay Mitra of the University of Essex Business School, UK, differentiated between regular business entrepreneurship with that of social and citizen entrepreneurship. He opined that social entrepreneurship is distinct due to its social value, inclusiveness, sustainability, localization and broad-based stake-holding.

Likewise, noted tourism entrepreneur, writer and social worker Karna Shakya said that his mission at this advanced age is to help imbibe the spirit of entrepreneurship on youths. Taking examples of low-cost eco-friendly tourism and alternative energy sector (especially solar), he said advanced thinking and customer-sensitivity are must for even social enterprises to grow.

On the occasion, Narottam Aryal, executive director of King's College, raised the discourse on 'compassionate capitalism' as a route to empower social entrepreneurs.
The conference also saw a social enterprise bazaar of 30 actual practitioners from the sector, showcasing their wares and services. Similarly, a report entitled 'The State and Profile of Social Enterprises and Social Entrepreneurship in Nepal' was also launched at the conference.

The report concluded that there is dominance of male and Newar community in entrepreneurship in the Kathmandu Valley which started from 1965. “Younger population below 40 years of age are largely involved in enterprise creation,” the report said, adding:

“The major difference that has separated the socially responsible enterprises from commercial enterprises is the creation of social impact, either at the backward linkage during the operational phase or at the forward linkage.”

The study also showed that government support is very minimal in spite of the fact that there is a strong potential for social enterprises to help solve problems associated with agriculture, education, health, unemployment and poverty. "Most organizations lack a coherent business plan and need training for that," the report reads, adding that the social enterprises need focused training for nurturing of intention, innovation impact and income."

The study also recommended that the government should identify social enterprise as a separate entity like public or private enterprises with the support of banks and financial institutions coming in. "Special training packages need to be developed for the impact based Lean Canvas Business Model and business plan preparation," it added.

Gender bender, social entrepreneurship is at the heart of PadMan

KATHMANDU, Feb 10: By nature, Laxmi (Akshay Kumar) seems to be very innovative and creative. It is this quality that... Read More...

ILAM, August 7: Though contract farming is beneficial for both farmers and businessmen, experts say it is not flourishing in the... Read More...

Social Media A need for growth

Social media is still a relatively new concept as people are still discovering its impact. Though the influence of various... Read More...