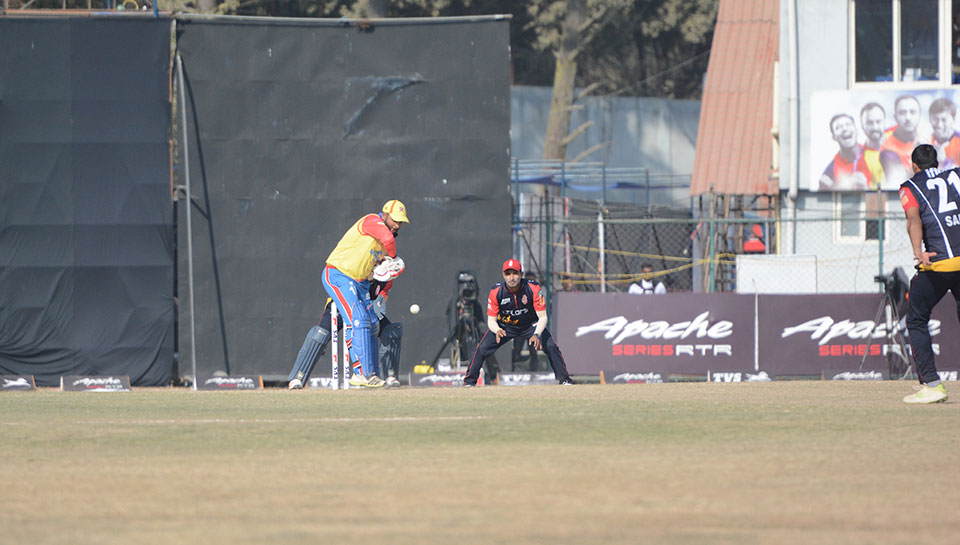 KATHMANDU, Dec 21: The hero with a bat of eliminator impressed with the ball as player-of-the-match Kushal Malla made three decisive blows powering his team Bhairahawa Gladiators to second successive Everest Premier League final at the expense of Kathmandu Kings XI in the second qualifier match played at Tribhuvan University Cricket Ground in Kirtipur on Friday.

The 16-year-old Malla picked up top-order wickets of Amit Shrestha, Naresh Budhayer and Irish player Kevin O’Brien to reduce Kings XI to 37 runs for the loss of four wickets at the halfway stage.

The losing team never recovered from the early dents and was all-out for 100 runs in exact 20 overs. The player-of-the-series so far for Kings XI, O’Brien’s wicket for a first-ball duck was the highlight of Malla’s left-arm spin.

Shrestha has dismissed for 32-ball 13 runs whereas skipper Rohan Mustafa was the first man to go scoring 6 runs from 15 deliveries before getting bowled out by his counter-part Sharad Vesawkar.

Budhayer could only make 2 runs in the innings whereas returning Sompal Kami was run-out for seven runs in a desperate attempt to complete a double toward the end of the innings.

Raju Rijal made one run before being castled by Muhammad Naveed and Siddhant Lohani stayed not-out on four runs.

The best part of the Kings XI batting came when talent hunt winner Sandeep Rajali shared a partnership of 33 runs with Indian leg-spinner Pradeep Sahu. Rajali top-scored with 27 runs from 26 deliveries including a four and a six before getting run-out by Avinash Bohora. Similarly, Sahu smashed three boundaries in his 22-ball 25 runs.
Apart from a three-wicket haul by Kushal, Naveed picked up a brace whereas Vesawkar and Bohora shared a wicket each. Bhuvan Kaki delivered a spell of wicket-less four overs conceding 15 runs.

Gladiators sealed its place in the final after Ryan ten Doeschate and Ravi Inder Singh played an innings of 45 and 31 runs respectively to win the match by six wickets in 17 overs. Singh scored three boundaries and a six during his 19-ball stay whereas the Dutch batsman Doeschate opened the batting and smashed five boundaries in his 38-ball stay. Samsaad Sheikh picked up two wickets which included the wicket of Aarif Sheikh for five runs. Sahu was the other wicket-taker. Mustafa and O’Brien bowled combined seven wicket-less overs and conceded 39 runs off it.

Gladiators’ skipper Vesawkar remembered Shakti Gauchan as a coach and mentor to Kushal Malla’s growth and believes his team is in best shape ahead of the final on Saturday. “I think young players can really click in these tournaments since they are unknown entity. Gauchan used to work four hours a day with Malla to make him a player he is today,” said Vesawkar adding that, “We have been improving with each match and I believe we are in best shape before the final.”