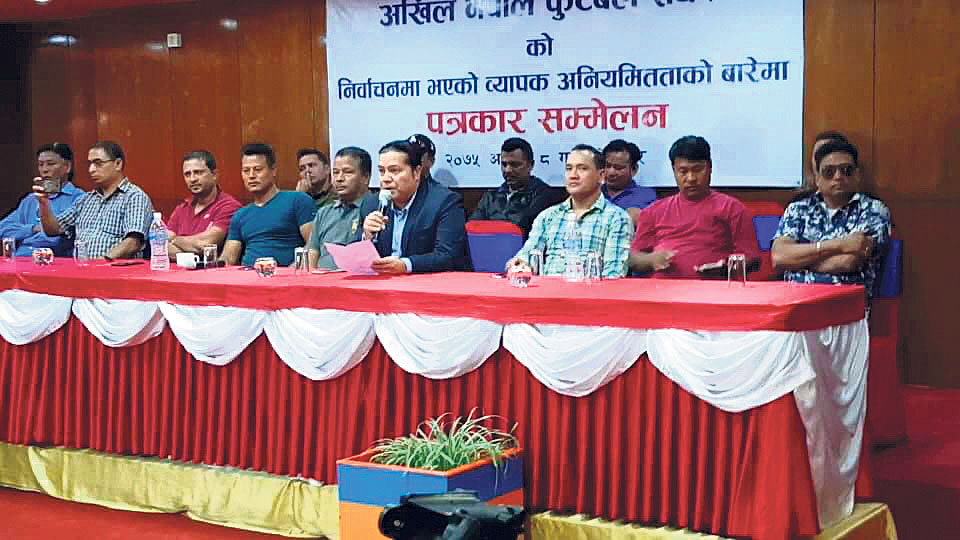 Former senior vice-president of All Nepal Football Association (ANFA) Mani Kunwar speaks during a press conference in Kathmandu on Monday.

Kunwar has claimed that ANFA president Karma Tshering Sherpa seized control of the election through bribery and death threats to the election committee members, going against the FIFA’s and AFC’s codes of ethics.

Kunwar had withdrawn his candidacy for ANFA president a day before the elections, citing irregularities in the election process. He had then claimed that the elections were being conducted by breaching the laws and statute of ANFA.

“Going against the statute of the association, criminal activities were conducted during the elections along with big financial irregularities. I had to withdraw my candidacy back then,” Kunwar said, hosting a press conference in Kathmandu on Monday. “I did not have evidence then, but now I have solid evidences against them.”

“I did not want to be part of such dirty politics. I wanted to save Nepal’s football. Hence, I withdrew my candidacy on ethical grounds.” Kunwar, also the former vice-president of South-Asian Football Federation (SAFF), has put six major allegations on the current leadership of ANFA, claiming that he has proof for all of them. He has accused the current leadership of financially influencing the judiciary, directly distributing cash to the voters, providing hundreds of free air tickets to them, taking voters on luxury visits in Nepal and India, and taking them to Europe tours immediately after the elections. All these helped Sherpa win the elections, Kunwar claimed.

Kunwar expressed confidence that legal action would be taken against Sherpa, vice-president Pankaj Bikram Nembang and ANFA’s international department chief Navin Pande for breaching the codes of ethics of AFC and FIFA.

“I have already forwarded the evidences to AFC and FIFA for further investigation,” added Kunwar.
Kunwar also accused the current body of appointing Pande, who is a German citizen, as the Nepali representative to FIFA Congress. However, ANFA has stated that Pande was given the job as a non-resident Nepali.

He also questioned the criteria that ANFA followed in buying FIFA World Cup tickets and distributing it in Nepal. The World Cup was held in June. “I had then asked the National Sports Council and the Sports Ministry to investigate the matter.”

“I do not want to talk about all the wrong things the current body has done since the elections, but I have questioned the eligibility of a foreign citizen to be Nepal’s representative in FIFA,” said Kunwar.

KATHMANDU, Aug 16: The All Nepal Football Association (ANFA) has increased its General Assembly members from 77 to 92 by amending... Read More...

KATHMANDU, Oct 29: All Nepal Football Association has bid farewell to Nepal U19 team for AFC U-19 Championship Qualifiers. to... Read More...