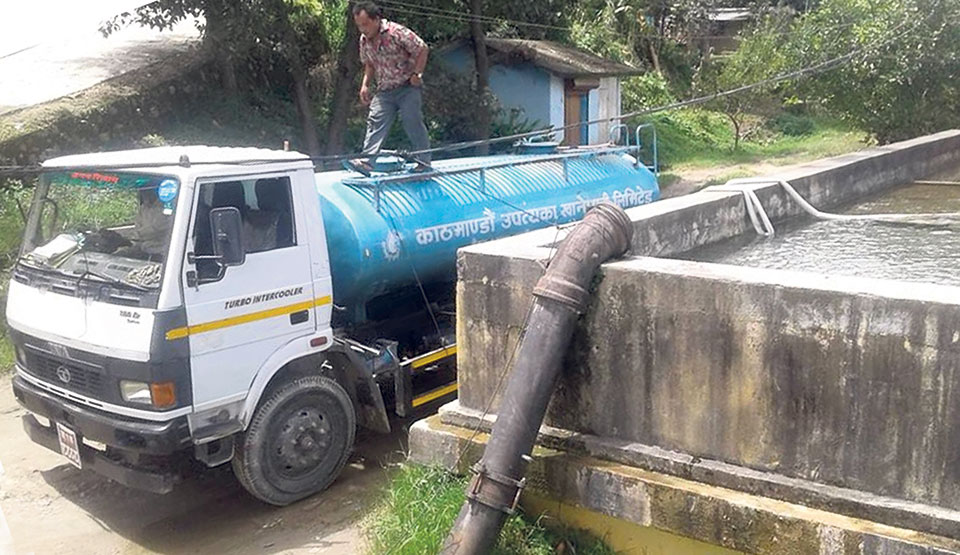 A KUKL tanker drawing water from the tank at the KUKL’s Bhainsepati distribution center on Sunday. Photo: Republica

KATHMANDU, Oct 29: Anyone visiting Bhainsepati can notice a pond and a water tank after taking a left turn from Waiwai Chowk in the posh settlement on the southern rim of the Kathmandu Valley. The pond is spread over 8-9 ropani [1.13 acres].

Early in the morning on Sunday, consumers and water tankers, both private and public, were seen lined up to transport water from the tank. Some officials working there kept watch on the road to ensure that there was no ‘disturbance’ while others assisted the water-loaded tankers to exit. This was the scene at the water distribution center of Kathmandu Upatyaka Khanepani Ltd (KUKL) at Bhaisepati.

However, the water was being stolen; the employees were actually selling water without issuing receipts.

“Illegal distribution of water has long been taking place in collusion with the employees. As far as I have seen, most of these tankers supply water to housing apartments and private houses,” said a local, requesting anonymity.

Locals have been voicing concerns about the massive irregularities at the Bhainsipati-based distribution center. “During mornings and evenings, employees fill up tankers with 6,000-liter capacity for just Rs 1,100. They do it without voucher,” another local said requesting anonymity. The price fixed by KUKL for 6,000 liters is Rs 2,330.

The Bhainsepati distribution center has about 20 employees. Among them, tanker drivers and guards live at the office. They are involved in illegal distribution every day before and after office hours.

This reporter, posing as a customer to gather evidence, approached one of the employees on Sunday morning and inquired about the price. The employee agreed to transport 6,000 liters without a voucher for Rs 1,100.

“If you follow the proper process then you have to go to the KUKL’s Mahankal office to get the voucher. But if you contact us, we’ll provide it directly and that too at a very cheaper rate. But make sure you visit us when the office is closed.”

However, the distribution center chief Raju Maharjan claimed that water is not being sold illegally. “We do not charge money when people come to us with small buckets. And we never sell water without a voucher,” he said.

As per the rules of the distribution center, they have to supply water to household taps after 4 pm. It supplies to Nakkhu, Satdobato, Patan, Gwarko, Bhainsepati, Bagdol and other nearby areas. However, many locals in those settlements complained that they do not get drinking water on their taps during the designated time.

Data maintained by the government states that around 60 million liters of drinking water is lost to leakage every day. Considering the massive amount of illegal sales, the amount mentioned as leakage does not look surprising.

Prakash Kumar Rai, deputy managing director of KUKL, said they would take action against anyone found involved in irregularities.