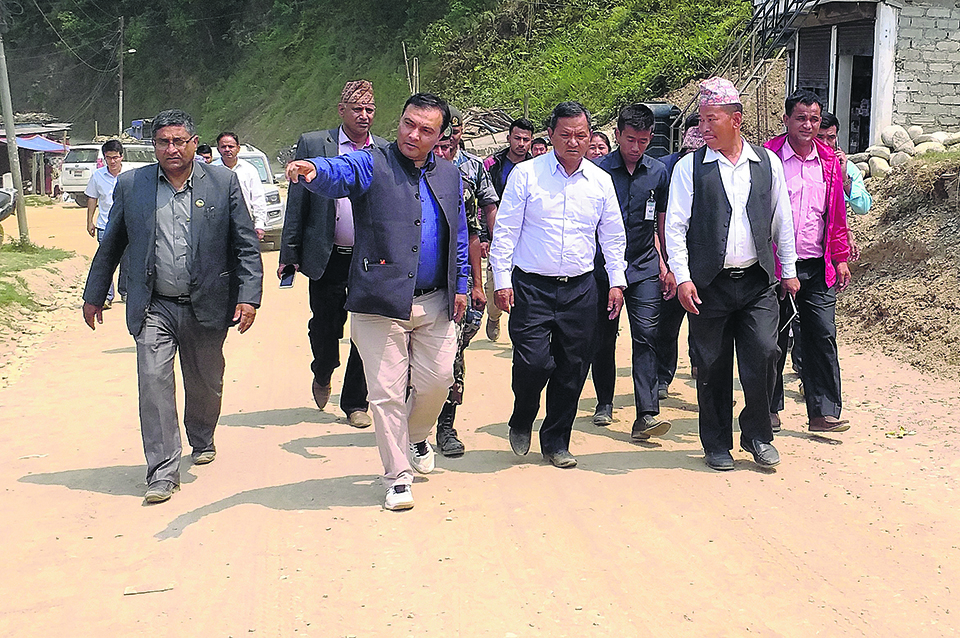 DULEGAUDA, May 16: Two years after the expiry of the first deadline for the repair and maintenance of Krishnamarga road that connects Syangja and Tanahun, the work is heading nowhere.

The construction company, Santoshi Construction Service, had signed the agreement to repair and blacktop the 24-kilometer road stretching from Ghiring Deurali of Tanahun to Keladighat of Syangja within 15 months. According to the District Technical Office (DTO), Nawalpur, the agreement was signed on April 27, 2016. As the work could not be completed on time, the deadline was extended for eight months.

Chun Narayan Shrestha, chairperson of the consumers' committee, blamed the negligence of the contractor behind the delay. "As per the contract, the work should have been completed within 15 months. However, the work has not picked up pace even three years after signing the agreement," said Shrestha, adding, "Finally the contractor has begun the gravelling work."

Earlier, the contractor had abandoned the project halfway. But later, it started laying hume pipes and digging sewers as well as gravelling the road. Chairperson Shrestha informed Republica that not even 20% of the work has been completed so far. The snail-paced work has posed a serious problem for commuters as well as locals.

"Dust in summer and mud in monsoon has become common view here," said Shrestha, adding, "Vehicles often get stuck in large holes during monsoon which leaves the passengers stranded for hours."

People living in nearby settlements of the dilapidated road are struggling to breathe fresh air.
The World Bank has provided financial assistance of Rs 107 million through the Rural Transportation Improvement Project for the road. After repeated complaints, Chief Minister of Gandaki Province Prithvi Subba Gurung along with Minister for Physical Infrastructure in the province Ram Sharan Basnet recently inspected the road.

After inspection, Chief Minister Gurung assured that the project won't be delayed anymore.
"The construction work will be intensified from now," said Chief Minister Gurung. According to him, stern action will be taken against the contractor if the work is further delayed.

RASUWA, June 22: Upgrade of road connecting to Rasuwagadhi has begun. As the roads has degraded and the area is... Read More...

SANKHU, April 4:The under-construction Chabahil-Sankhu road section is full of fog resulted from pile-up of dust and smoke. The road... Read More...

JAJARKOT, Oct 10: Locals of Bheri Municipality have vented their ire against the government authorities for not making efforts to resume... Read More...