KP Oli was an architect of two Tarai-province model 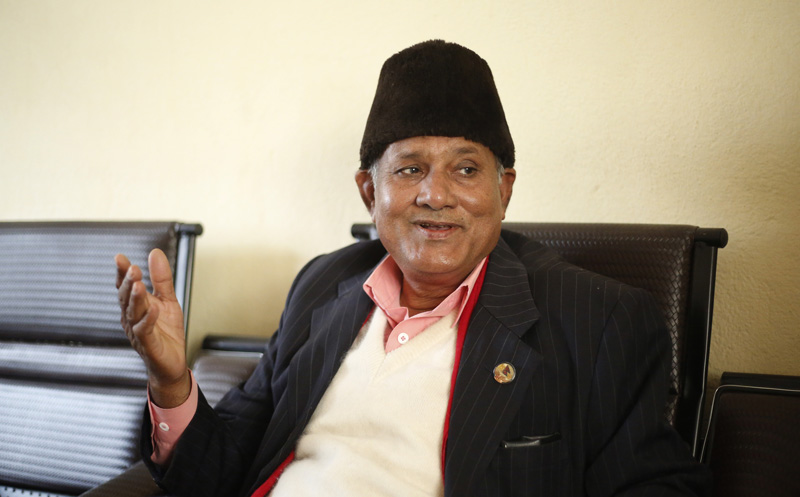 Veteran Nepali Congress leader Farmullah Mansoor, who was elected into the parliament from Bara district in 2013, is among the most vocal Madheshi leaders in the party. Mansoor was a key person behind the first amendment of the constitution in January, 2016. What does he make of the second constitution amendment bill? Will it pass? And what happens if it fails? The Congress Central Committee member spoke to Republica’s Biswas Baral, Mahabir Paudyal and Kosh Raj Koirala.

The NC-Maoist government has tabled a constitution amendment bill in parliament. How confident are you that it will pass?
I strongly believe that the amendment bill will pass for two reasons. First, even when we had brought the constitution back in November 2015, we had committed to keep working to bring the disgruntled forces on board. Then Prime Minister Sushil Koirala who led the constitution process had admitted that there were shortcomings in the constitution and he had assured everyone that these shortcomings would be removed by the parliament. KP Oli and current Prime Minister Pushpa Kamal Dahal are first-hand witness of this. As per Koirala’s commitment, we amended the constitution for the first time last January. Now a second amendment is under parliamentary deliberation. And this proposal has been brought to address genuine concerns of common Madheshis, not for leaders of certain parties. Thus only those who believe Madheshi people should not be given adequate rights and that they should not be empowered will stand against this amendment. The rest will vote in its favor and the amendment bill will be passed. I am aware of dissenting voices within my own party on this matter. But at the time of parliamentary voting, they will be in favor of the bill.

So no party that claims to represent all of Nepal—people of hills, mountains and Tarai plains— will dare to vote against the amendment bill. If they do so, they will lose their political space in Madhesh.

But how will you garner two-thirds parliamentary majority for this?
Consider what happened two years ago. Maoist and Madheshi lawmakers had vandalized the Constituent Assembly, obstructed constitution making and threatened not to let the constitution pass. It seemed the constitution would never be promulgated. But Maoist leaders came around to vote in favor of the constitution within few days. In fact, they played a major role in constitution promulgation. Today, some forces are warning of the dangers of the passage of the amendment bill.

But as I have said they will ultimately vote in its favor since the amendment is about granting more rights to Madheshi people and bringing them into political mainstream. There are already positive signs. The forces which opposed this constitution from the very beginning, which boycotted whole process and launched months-long agitation against the constitution have also become ready to accept this constitution if the amendment is passed. This makes me optimistic.

You seem to be echoing the views of the Madheshi parties. But the main opposition, UML, has been implying that this is actually India’s view and Madheshi leaders are only acting as India’s proxies.

It does not behoove a leader like KP Oli to say this. After all, Oli, Congress leader Sushil Koirala and RPP leader Surya Bahadur Thapa had agreed to two provinces in Madhesh: one stretching from Sapatari to Parsa and other from Nawalparasi to Bardiya. This model had been presented in the Constitution Political Dialogue and Consensus Committee of the Constituent Assembly. These three leaders have put their signatures to this proposal. In fact, Oli himself was among the architects of this model. If Oli had approved this model to please India at the time, I have nothing to say. Otherwise, this is something they all had agreed to. It’s not right to unnecessarily drag in India.

But haven’t ground realities shifted since the promulgation of the constitution? For instance we saw huge protests in Province 5 against separating its hilly districts from the districts in the plains. How can you ignore this public voice?
Those who argue in favor of combined hill-plain provinces should realize that this Mahendra-era model has failed. This is precisely why we adopted the federal system. This is why we needed a new model that guarantees autonomy and self-rule. Some say Madhesh should not be separated from hills. This only reflects the greed of those who want to pass on their unearned privileges to their children and grandchildren, instead of really empowering the disadvantaged minorities. They want to reserve the posts of chief ministers for themselves. And to serve their interest they question the patriotism of Madheshi people. Madheshi people along the border have worked as the first line of defense for Nepal. Think of how people of Tilathi in Saptarai fought back encroachment of their lands few months ago. Madheshi people have resisted every attempt to encroach Nepali land with their blood and sweat. What’s wrong in allowing them to be their own rulers?

In your view should local election be held only after the passage of the amendment bill?
Nepali Congress is always for election. There can be no question of Congress opposing election, whether or not the amendment bill passes. We are committed to elections. But we also need to create an environment whereby people in the hills as well as the plains can participate in these elections. Passage of the amendment will ensure this. It is the communists who use election as a tool to consolidate power. For us it’s a matter of faith.

Recently you led a delegation of Madheshi leaders from Nepali Congress and met party president Sher Bahadur Deuba. What did you discuss?
We told the party president that since election date has already been announced, and since it is vital to bring all forces on board, we must take the amendment process forward through a ‘fast track’ method, just like we had done at the time of constitution promulgation. We requested the party chief to take the lead in getting the bill passed with urgency. The president has assured us to take all necessary steps for this.

We don’t have much time. We need to work on war footing. It all comes down to whether you are sincere and really committed to holding elections. We have the precedent of successfully holding election despite time constraints. Back in 2008, election date had been announced for first Constituent Assembly. The deadline for filing nominations had also already passed. Yet then Prime Minister Girija Prasad Koirala extended the deadline to bring the agitating Madheshi forces on board.

We still have a lot of time. If we can forge political consensus, all elections can be held within the constitutional deadline. All that it calls for is honest effort of political leadership to amend the constitution.

I am a cadre of Nepali Congress. We believe in party system. We fought against partyless Panchayat. So there is no question of Nepali Congress supporting a system against which we fought. Local election should follow the party system because political parties can discipline their local-level cadres and make them work for the people. This increases accountability.

You are very confident that the amendment bill will be passed. But what do you think will be the reaction of the Madheshi people if it fails?
There is a feeling among Madheshi people that the state has not heard and addressed their concerns. This feeling persists to this day. If the amendment bill passes, it will remove their doubts with the Nepali state. If there is a wound, you need to try to heal it. If you ignore the wound, you cannot predict what will happen to it. It might fester. So the state should try to heal the wound. Ironically, those who are talking about implementing the constitution by holding elections within the stipulated deadline have themselves obstructed the House for long to oppose the amendment.

UML is pushing the election into uncertainty by opposing the bill. If constitution amendment fails, there can be no elections and constitution implementation will be derailed. And if that happens, UML should take the responsibility. If UML had let the House function, the amendment process would long since have reached a logical end. We would perhaps even have held one election by now.

JHAPA, Dec 10: CPN-UML Chairman KP Sharma Oli has made a victory with more than 28 thousand votes in Jhapa-5. Read More...

Melania Trump sues news outlets that said she was an escort