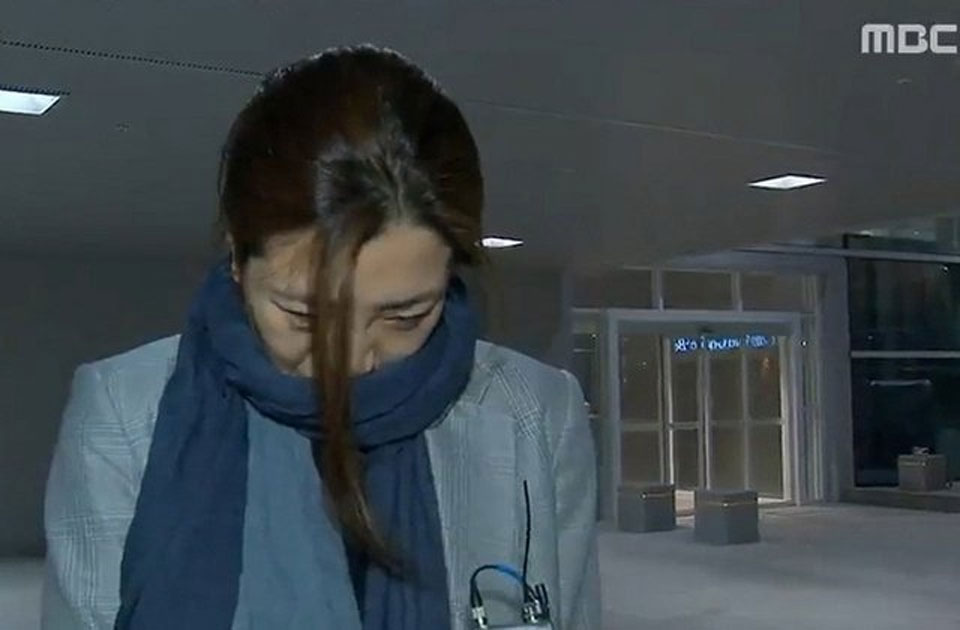 Cho Hyun-min, a senior vice president at Korean Air Lines and a daughter of its chairman Cho Yang-ho, arrives at Incheon International Airport in Incheon, South Korea, in this still image from MBC exclusive news report footage obtained by Yonhap on April 15, 2018. MBC footage/Yonhap via REUTERS

SEOUL, April 16: Korean Air Lines’ labour unions called for the youngest daughter of its chairman, a sister of the infamous ‘nut rage’ heiress, to step down from management after her alleged abusive behaviour against an advertising agency official caused public outrage.

Cho Hyun-min, also known as Emily Cho and a senior vice president at Korean Air, apologised on Thursday for what she called her “foolish behaviour” after media reports said she threw water at the face of an advertising agency manager during a recent business meeting.

Cho, speaking to TV channel MBC after she cut short her vacation overseas and arrived at Incheon International Airport on Sunday, denied she had thrown a cup of water at the manager’s face but said she had “pushed” it.

She said her action was “foolish.”

Police have launched a preliminary inquiry to see whether Cho had abused her power or broken any law in connection with the latest reports.

Korean Air said on Monday it was aware of the police probe. “After we observe the outcome of the investigation, the company plans to take appropriate measures,” the airline said in a statement.

It is the latest controversy to engulf the owner family of South Korea’s largest airline group.

Cho’s elder sister Cho Hyun-ah, or Heather Cho, made headlines over a notorious “nut rage” incident in 2014, when she lost her temper over the way she was served macadamina nuts in first class.

Her younger sister’s own tantrum has reignited public impatience with family-run conglomerates known as chaebol, over what some South Koreans see as unchecked bad behaviour by the rich and powerful.

Korean Air’s employee union and two pilots’ unions said in a joint statement on Sunday that Cho Hyun-min’s actions harmed the reputation of Korean Air. They want her to step down and offer a sincere apology to all employees and the public.

“The controversy surrounding management taking advantage of its power has become the most-searched term and the subject of unending breaking news, and ... leading to criticism for around 20,000 employees who have devoted blood and sweat working on the front lines,” the unions said.

Also on Sunday, Cho sent a mass email to Korean Air employees apologising again for her actions, according to a copy of the email seen by Reuters.

“As I was focusing on my passion for the work, I was unable to control my thoughtless words and deeds, through which I caused injury and disappointment for a lot of people,” Cho said.

Korean Air confirmed that the email was sent to all Korean Air employees, but declined to comment further.

Dozens of petitions demanding that Cho be punished and “Korean” removed from the airline’s name were posted on Monday on the presidential Blue House’s online petition page.

One petition calling for the change to the company’s name had 44,374 signatures.

“Around 20,000 Korean Air employees earnestly desire the continued use of our company name ‘Korean Air,’” the labour unions said in the statement.

Shares in Korean Air Lines fell 4 percent in early trade to a near three-week low, compared to a 0.1 percent fall in the broader market.