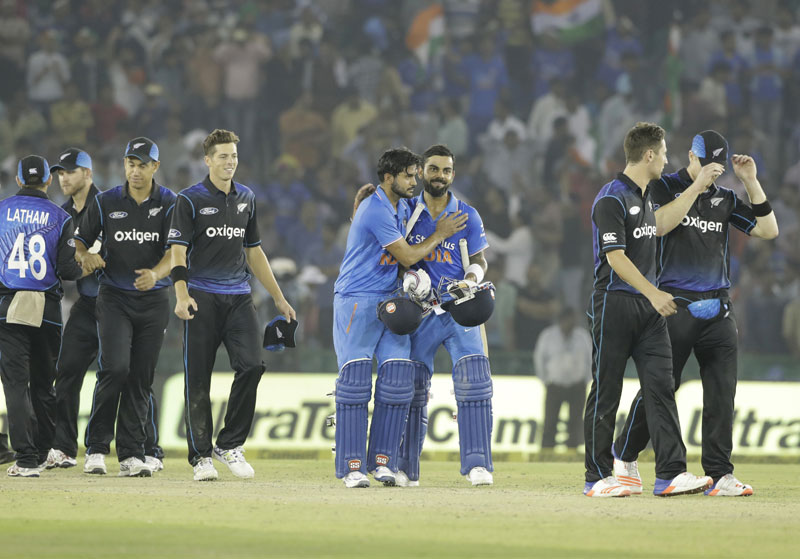 MOHALI, (India), Oct 24: Virat Kohli scored his 26th ODI hundred and went on to an undefeated 154 as India scored 289-3 in 48.2 overs to beat New Zealand by seven wickets in the third one-day international on Sunday.

Inbetween, Ross Taylor dropped Kohli — when he was on only six — off Henry in the 5th over and it proved to be a vital moment in the match.

"It's part of the game, unfortunately, you want to catch them all but it doesn't always happen," said New Zealand skipper Kane Williamson.

Skipper MS Dhoni promoted himself to No. 4 and put on 151 runs for the third wicket with Kohli. It was the second-highest third-wicket partnership in ODIs for India against New Zealand, after 158 by Navjot Sidhu and Mohinder Amarnath in Sharjah in 1988.

Dhoni scored his 61st ODI half-century off 59 balls and in doing so crossed 9,000 runs in ODI cricket. He became the fifth Indian batsman and third keeper-batsman across the world to achieve that feat.

Dhoni was out in the 36th over for 80, Taylor holding the catch this time at cover off Henry.

Kohli then took over and reached his hundred off 104 balls. He eventually crossed 150 off 133 balls, the highest individual ODI score at this ground, improving on Dhoni's 139 against Australia in 2013.

Manish Pandey (28 not out) added 97 runs with Kohli for the unbroken fourth wicket as India won with 10 balls to spare, partly thanks to Dhoni's promotion.

"I have felt for some time that I can express myself more at No. 4 and play according to situation. But there are others who can bat at this spot too," said Dhoni, who enjoyed seeing Kohli from close-range.

"It's a pleasure to watch Virat bat," Dhoni said. "He can play orthodox cricket and also go after the bowlers. It is beautiful to watch, irrespective of the format."

Earlier, after being put into bat, Martin Guptill (27) and Tom Latham (61) provided New Zealand with a brisk start, adding 46 for the opening wicket. Guptill was trapped lbw by Umesh Yadav (3-75), and then Williamson (22) added 34 runs with Latham for the second wicket.

Latham hit his sixth ODI half-century off 59 balls, a knock that included three fours and a six. It was his second half-century of this series and fifth overall on the tour. He put on 73 runs for the third wicket with Taylor (44).

Amit Mishra (2-46) broke this threatening partnership as Taylor was stumped. Luke Ronchi (1) was dismissed in the same manner a short time later with sharp glove-work from Dhoni on both occasions.

It was a third successive collapse for New Zealand's middle order in this ODI series.

"It is obviously frustrating to lose those wickets in the middle in a clump. We were probably looking at a bit more at that stage. But the lower-order performed really well. Neesham and Henry were outstanding and helped us recover," said Williamson.

Neesham hit 57 off 47 balls, including seven fours, and put on 84 runs for the ninth wicket with Henry, who was 39 not out. Henry faced 37 balls, and hit four fours as well as a six.

Their partnership allowed New Zealand to reach a competitive total. Neesham was dismissed in the 49th over off Yadav, as he was caught off a skier. Bumrah then bowled Trent Boult (1) in the final over of the innings. 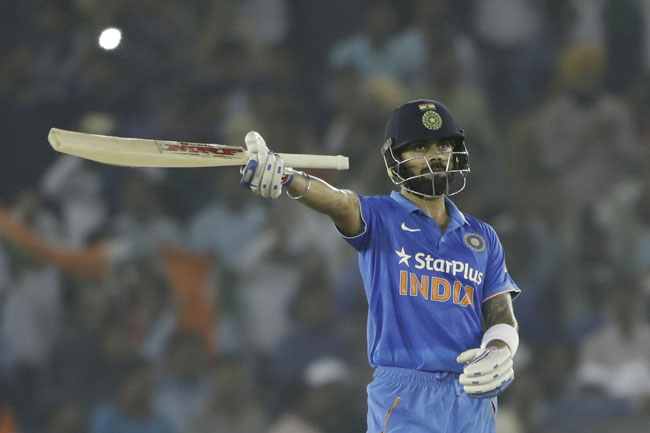 KINGSTON, July 7: An unbeaten century from captain Virat Kohli and a half-century by Dinesh Karthik steered India to a... Read More...