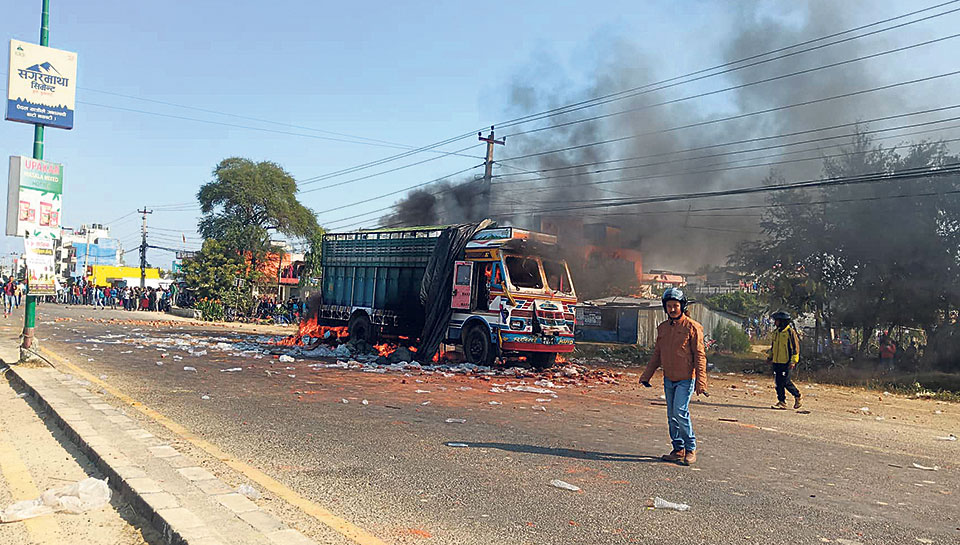 An agitated mob of students and locals set on fire a truck which hit and critically injured a local girl, Prakriti Chand, a seventh grader at Tribhuvan Secondary School, Kohalpur, at around 10 in the morning on Sunday. Police fired several rounds of tear gas canisters and “bullets” to control the angry students and locals who allegedly attacked a local police station when the police tried to take into control the “anarchic situation” created after the accident. Over two dozen students and locals and about 10 policemen are reported injured in the clashes. The truck-hit girl and five of those injured in the police-protestors clashes were airlifted to Kathmandu for treatment, according to acting Chief District Officer of Banke, Krishna Kant Upadhyay. Photo: Arjun Oli/Republica

KOHALPUR, Dec 9: At least two dozen students and locals were injured when police opened fire after clashes erupted when a truck hit a schoolgirl in Kohalpur in Banke district on Sunday morning.

The truck with registration number Na 2 Kha 9459 en route to Nepalgunj from Kohalpur crushed the legs of Prakriti Chand, a seventh grader of the  Tribhuvan Secondary School, leaving her seriously injured. The truck hit her immediately after she was dropped near the school gate by her father.

Enraged locals set the truck on fire. A clash erupted between the locals and police when the latter tried to bring the situation under control using force. The police also opened fire at the locals and students leaving dozens injured. Likewise, 10 police officials also sustained injuries after they were hit by stones thrown by the locals.

Venting ire against the police atrocity, the agitated protesters also vandalized around a dozen and a half vehicles on the road and  pelted stones at the police station.

The locals also vandalized the canteen of the Area Police Office. To bring the situation under control, police fired several rounds of tear gas canisters.

According to Dr Devendra Acharya of Nepalgunj Medical College Teaching Hospital, of the 24 injured admitted to the emergency ward, two are in serious condition.

“Most of the injured have received bullets below the knee. Some have shrapnel injuries above the knee,” Acharya said.

All the injured security personnel have been admitted to Tripura Hospital of the Armed Police Force (APF).

Meanwhile, Lalit Basnet, a 12th grader, said that he was hit by a bullet in the hand while walking on the road near the Area Police Office. “I had no idea that the police would open fire,” he said, adding that police had never opened fire in similar clashes before.

Prakriti Chand, who was hit by the truck, and five other injured protesters were airlifted to Kathmandu for treatment by a Nepal Army helicopter, according to Krishna Kanta Upadhyaya, officiating Chief District Officer (CDO) of Banke.

When asked why police opened fire, Upadhyaya said that he had no idea. “The police had not taken permission from the administration to open fire,” he said.

According to SP Bir Bahadur Oli, chief of the District Police Office, Banke, police had fired tear gas shells after protesters vandalized the police station. He also said that police fired shots in the air to take the situation under control.

“Police might have fired rubber bullets at the protesters,” he said.

Police have restricted some areas after the incident. The local administration has mobilized security personnel in a huge number in Kohalpur following the incident.

One found dead, other unconscious at Kohalpur hotel

KOHALPUR, Aug 31: A youth, who was staying at a Kohalpur-based hotel in Banke district, has been found dead. Bikash... Read More...