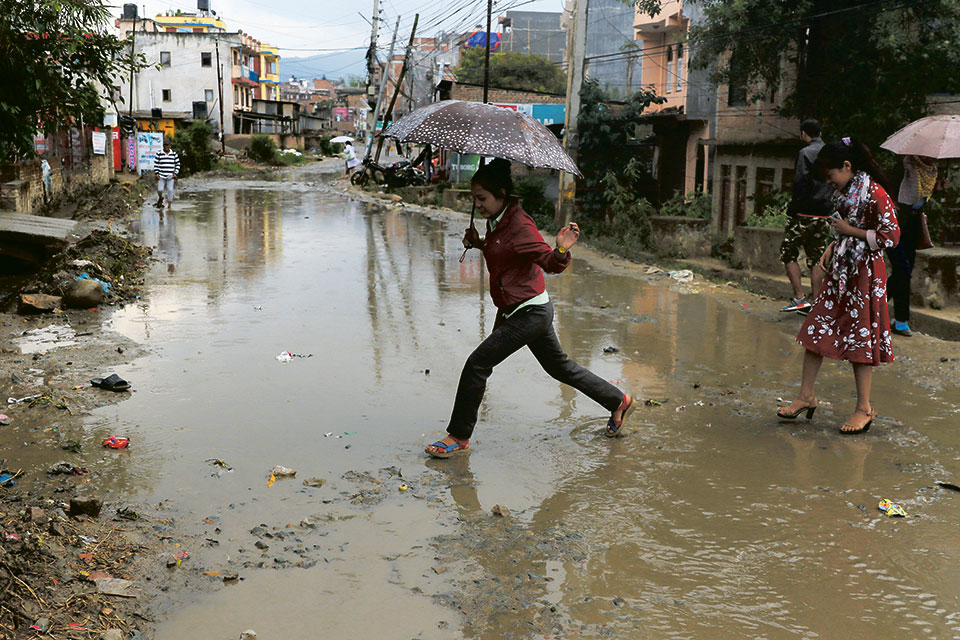 It’s that time of the year again when we start to fret about the condition of our roads. To be honest, we do that all year round anyway but with the monsoon almost upon us a sense of despair takes over. Where roads exist, even the slightest downpour turns everything into a dirt-filled lake and where roads don’t exist, it’s all just muddy slush and dangerous conditions.

Although, we sometimes get a brief respite when our hard-earned tax money is used to pave roads overnight or make the sort of temporary repairs that wash away with the first downpour. All of these small little miracles are thanks to our part time shady contractors and full time political cronies who go into overdrive towards the end of the fiscal year in preparation for the release of the next year’s funds. But apart from these temporary – and uncalled for – cosmetic facelifts to our roads, it is pretty much unrelenting misery all around for those of us that work and commute in the capital.

There was no small amount of schadenfreude then when our dear Minister for Physical Infrastructure and Transport, Raghubir Mahaseth, found himself in a spot of bother this week after his SUV got stuck in a stream and he had to be rescued by security personnel. All this transpired when he was returning after laying the foundation stone for a bridge no less. I would love to say that our hearts go out to him but that would be patently untrue not least because we face the same issues almost every day during the monsoon – without having the luxury of a tax- payer funded SUV to write off every time we get stuck. To be honest, that was an exercise in futility from our honorable minister because the next time he ventures out there – if he does at all – the bridge won’t even be close to completion.

At the other end of the spectrum, even when we have good roads we manage to turn them into death traps. The Kalanki Koteshwor road section has seen more than its fair share of accidents ever since it came into operation and the word flying around is that “faulty and unscientific” infrastructure is to blame. Trust us Nepalis to get something for free and then complain about it! A little retrofitting by our government wouldn’t have made the biggest dent in the annual budget but why bother?

In any case, look around you. Where in this big, dusty and polluted capital is any public infrastructure made scientifically?  On my daily commute, there is a road with a lamppost right in the middle (a remnant of the finger pointing and blame shifting between the NEA and Department of Roads, I presume), a few speed breakers so high they would turn any vehicle with low clearance into a see saw, zebra crossings at turns that are total blind spots to oncoming traffic just to name a few.

We survive because we drive carefully and the moment we don’t there is a mishap waiting to happen. Granted, we shouldn’t be happy with faulty or incomplete infrastructure – free or otherwise – but that alone isn’t the answer. Even if we had perfect infrastructure – all signs in order, traffic crossings, entrances and exits where they should be – it still wouldn’t solve all problems. Not all folks use zebra crossings. Some will simply cross the road randomly with their hands in a stop sign – as if that is supposed to be some magic wand that makes traffic stop miraculously. Even if there is a proper exit onto a road, people will still cut in with their motorcycles where they feel like, they will still overtake from the left, still use their high beams at night, public transport vehicles will still stop in the middle of the road like it’s their private property. The list is just endless – think of every single traffic phenomenon/behavior that annoys you – and all of it will still exist even with proper infrastructure.

Education is the key in changing mindsets but barring that punitive measures have shown to work just as well. There’s a reason lane discipline initiatives, anti-drink driving measures and anti-horn rules have worked – they carry the threat of punishment. The mishaps that occur are usually the result of over-speeding and lack of attention to the road. The traffic police are now trialing speed guns to check over speeding but with only three of them to go around, it’s anyone’s guess how successful this measure is going to be.

You can never be too careful with the monsoon around especially with the roads – even the good ones – being the way they are. As the traffic police never fail to remind you, safety is everyone’s responsibility whether they are pedestrians, bikers or drivers. For a change, we would do well to listen to them irrespective of whether they are not around to enforce it or not.

SINDHUPALCHOWK, June 27: Their makeshift shelter is visibly dilapidated. The plastics have plenty of holes and water easily leaks in from... Read More...

COVID-19 spreads to rural India, villages ill-equipped to fight it
20 hours ago