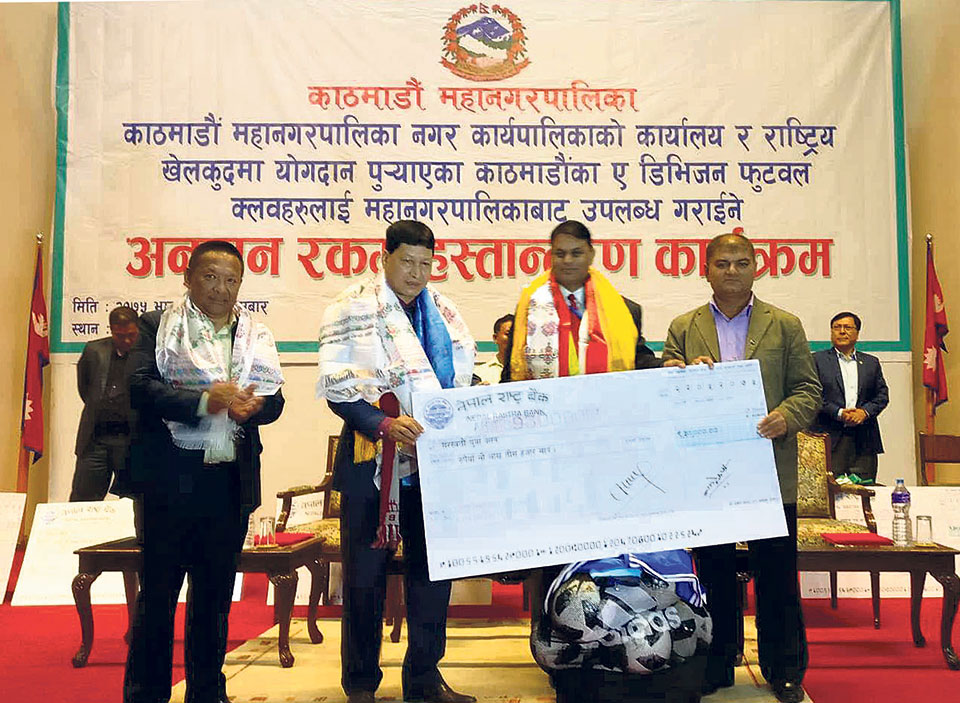 Kathmandu Mayor Bidya Sundar Shakya hands over a check of Rs 1 million to Saraswoti Youth Club during a function in Kathmandu on Monday. Photo Courtesy: ANFA

KATHMANDU, Sept 11: The Kathmandu Metropolitan City (KMC) has provided Rs 1 million, in cash and kind, to each of the six Kathmandu-based clubs who will be contesting in the 2018-19 Martyr’s Memorial A-Division League slated to be started from September 29 this year.

At an event organized in Kathmandu on Monday, the metropolitan city signed agreement with the clubs to provide Rs 500,000 in cash and sports materials worth Rs 500,000 for the league.

Mayor Bidya Sundar Shakya handed over the money to the clubs. Speaking on the occasion, he said that the metropolitan city has provided the money to support the clubs for the development of football in the country, and assured them of increasing the fund if they performed well and played excellent football.

The league is starting in Nepal after a gap of five years. The league, which has proved to be the backbone of Nepali football, has been halted and resumed time and again in the past seven decades.

While the All Nepal Football Association (ANFA) is organizing the league after so long, it has decided not to relegate any team from the top tier. The league that runs for months will give a new champion, but the bottom teams in the ‘A’ Division will stay in the league, and not get relegated.

The present working committee, which came to the ANFA leadership with a slogan of bringing ‘change’ at the football governing body, apparently believes that organizing the league without relegation would be a big achievement.

As the Dasarath Stadium is not yet reconstructed after the 2015 earthquake, there are other stadiums where the league can be organized. The ANFA Complex in Satdobato, Army Technical Center in Lagankhel, and the Halchowk Stadium of the Armed Police Force are the possible venues for the league in which a total of 14 teams can take part.

The ANFA has decided to promote a team each from the B and C divisions despite the system of not relegating any teams from the top tier. The ANFA ‘change campaign’ is partly led by former national player and former Additional Inspector General (AIG) of Nepal Police, Bigyan Raj Sharma.